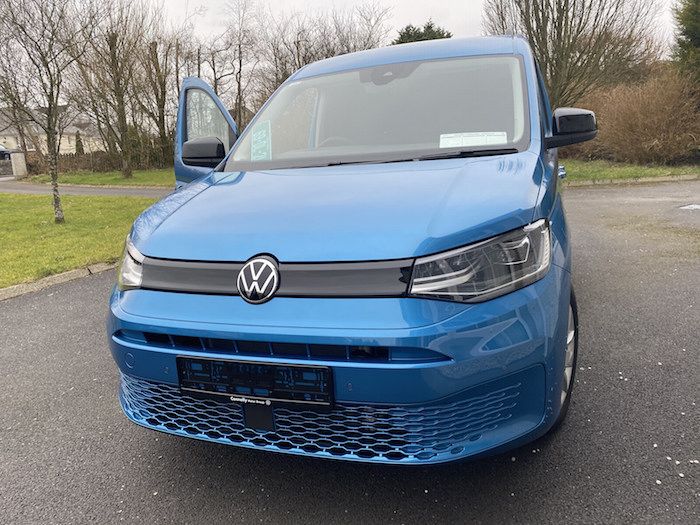 Who remembers the Seat Inca van? It had a VW Polo front and a high dome type roof.

It was also known as the Caddy. They went on forever, maybe one with a petrol engine and a few different versions in diesel. They were a familiar sight on the roads of Ireland after they went out of production.

Then the style council went to work on the Caddy to produce the third generation, one of the classiest light commercial vans about. It’s hard to believe that was nearly 20 years ago now and now that familiar straight line siding has said farewell as it made way for the all new Caddy Cargo which arrived in Donegal at the weekend. 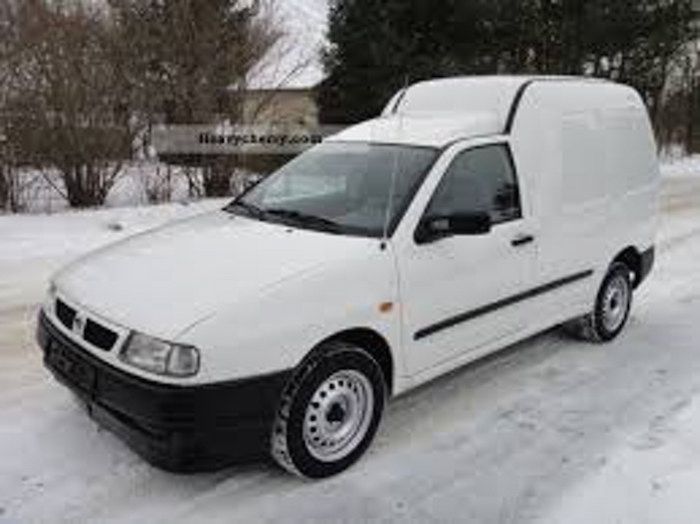 The first Caddy van on Irish roads which was also call the Inca , a partnership with Seat.

The next generation Caddy is a complete all-new-design, something that caddy admirers might take a while to get used to.

Having said that seeing the new Caddy for the first time sitting at Connolly Motors (formally JJ Reid’s ) is beautiful.

The maxi version, when it arrives later will be slightly smaller than its predecessor and this standard Caddy is bigger than the one it replaces, mind you there’s nothing standard about this one. 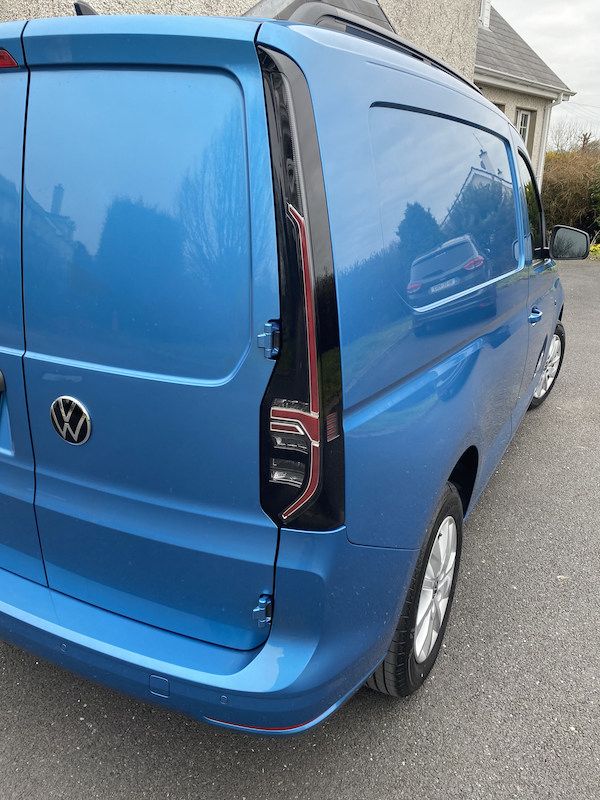 A view of the very impressive taillight cluster on the new Caddy. Photo Brian McDaid.

Oisin Cannon, in the commercial sales department for the Connolly group in Donegal loaded up this wee van with all the extras. Auto, DSG paddle shifts, digital dash, heated seats, alloys, roof rails, the list goes on. This was the Auto 122 bhp version which I’ll come back to at the end of this report.

Under the present restrictions, we just got a very short look at this new van from VW. Hopefully, when these restrictions are lifted I would hope to get a more in-depth look and drive in this van and would like to see the standard version in manual form at 102bhp 6 speed which is due in also as a demonstrator in Letterkenny which we hope to get an extended run on when it arrives. 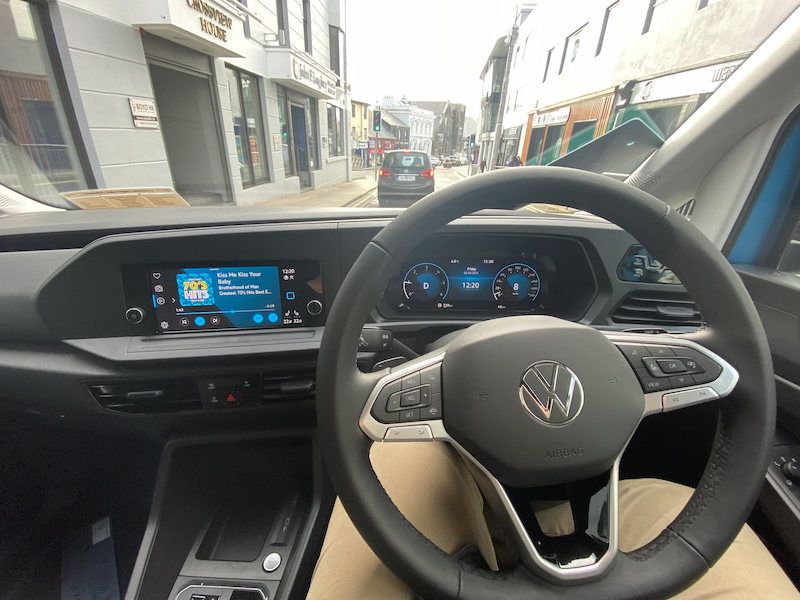 A view of the interior of the new caddy from behind the multifunctional wheel. Photo Brian McDaid.

On looks this all-new Caddy is beautiful, Outside those extended tail light clusters that go from the top to the bottom of the upper sections of the back doors are very impressive and in them the smallest wee light for indicators and reversing lights have powerful LED’s to send a clear message to other motorists.

Twin headlights units will light the road ahead in a headlight cluster that includes day driving lights and indicators with the front grill closed off which is just part of Volkswagen’s drive to make this new caddy line slicker line one of the lowest drag factors in its class. 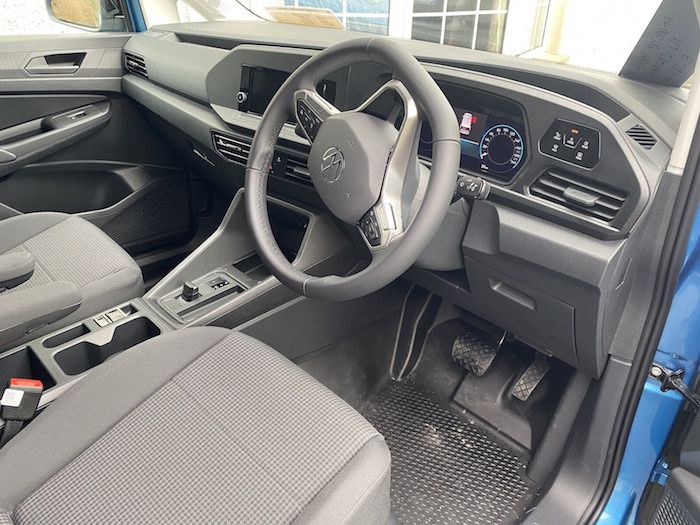 A view of the interior of the new dash layout on the Caddy van. Photo Brian McDaid.

Gradual wheel arches shape the lines of the new Caddy with panel shapes moulded into the upper panels. The new caddy will share the latest of VW’s common platform which means that this Caddy can benefit from a host of driver-assist safety features from the car section of the company. This coupled with completely new front and rear suspension set up will make the caddy more car-like to drive loaded or unloaded.

The cargo area in the Caddy is slightly bigger in standard version compared to the old one. A glance in the back doors and the wheel arches seem to have very little intrusion into the load area, leaving the caddy able to swallow the whole euro pallet sideways. We got a small spin around the 5km restriction area and were very impressed by driving this all-new van. 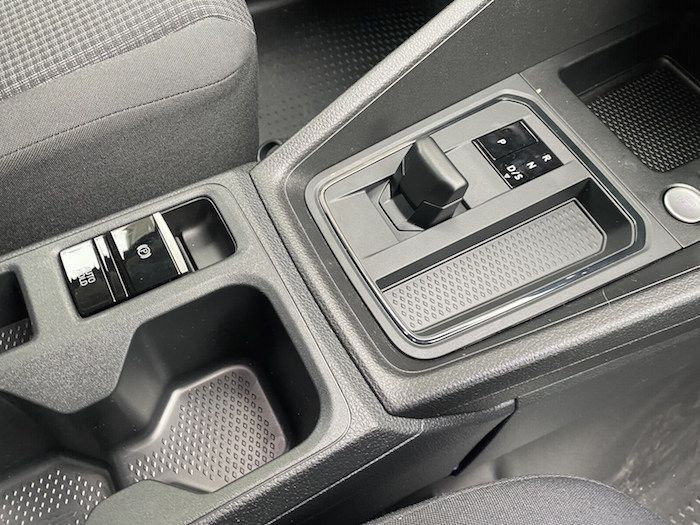 The automatic transmission controls which was an option pictured with the push button handbook which is standard on the new Caddy. Photo Brian McDaid.

Inside behind the wheel, the driving position and the new dash layout up front is very well appointed. The vans we drove with the digital dash but you could set it back to the conventional type. Coupled with this is the multifunctional Screen in the centre of the dash which links up with the least amount of effort to your phone linking everything in which is so important for someone who is running their business on the road. The dash has that cut out of stone quality feel to it, great pockets on the dash for temporary storage of the likes of documents needed at hand.

The old conventional handbrake is missing for the new caddy in favour of the push-button version. The one we drove didn’t even have a gear stick other than a small button to select drive or reverse it also had the paddle shifts on the steering column. 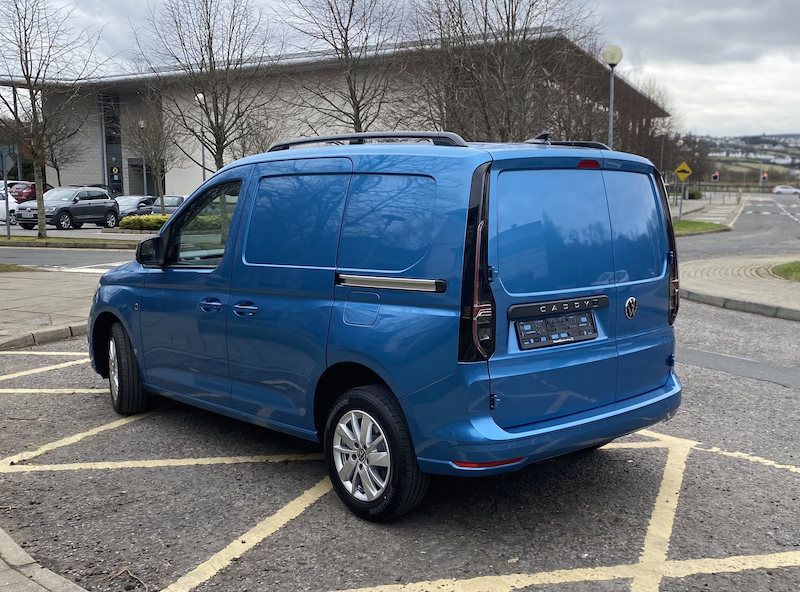 A side on view of the new Vw Caddy with it widen wheel arches from and back. Photo Brian McDaid.

This was 7 speed which show up on the dash when you are using the manual mode, once you are moving it’s hard to tell it’s and automatic because the gear change is so seamless in VW’s DSG (direct-shift-gearbox) which uses a double-clutch system.

Automatic gearboxes are the norm for bigger commercial vehicles like the trucks and bigger busses on the road, it’s not just there yet and the smaller commercial vehicles but I would highly recommend it in this new caddy. It just makes driving so much easier especially if in heavy stop-start driving.

The more popular option will be the 6 speed manual which is available across the range which we didn’t get to drive yet but are looking forward to doing in the future.
With the exception of the front spoiler which was colour coded in our van, I’m not that set on it, maybe in the black plastic bumper version it might blend in a bit better, it just looks to easily damaged in the everyday driving of a commercial van. That being said the good points about this new caddy more than win even down to the new VW logo which to me looks like a very old VW logo all adds to. 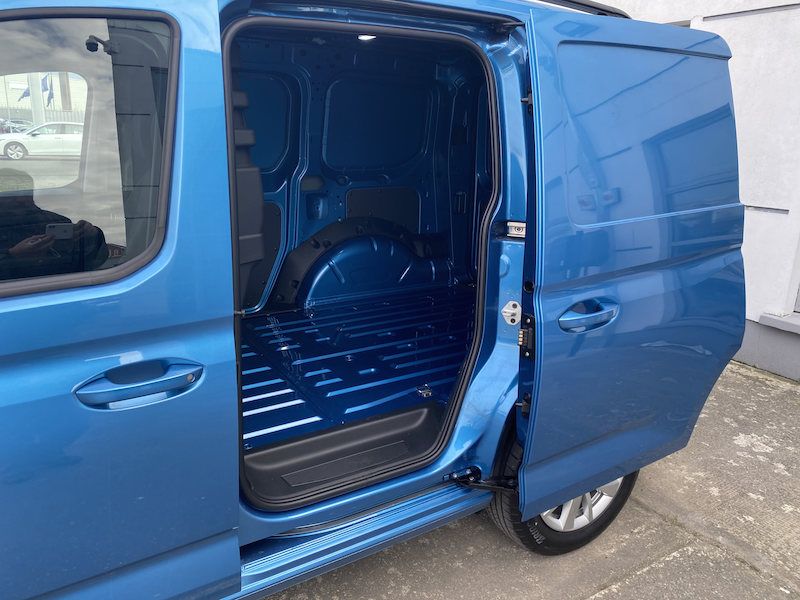 Looking in from the side door of the new caddy to the large area. Photo Brian McDaid

Elements of class on this well-presented van according to the list price released the Caddy come in at €15,528 plus VAT and there’s an offer of zero percent finance on order s of the van place before the end of March.

Summing up this all new Caddy, VW made a great job of redesigning an iconic small van that was the old Caddy. Drivers of small vans spend more time behind the wheel than most drivers, for them as an employee or as the owner of their own business it’s their workshop, it’s their office along with being their mode of transport.

As a van driver myself, I think VW have thought of everything and every option to cater for the taste of someone who spends a lot of time on the road wiht the arrival of the new Caddy. 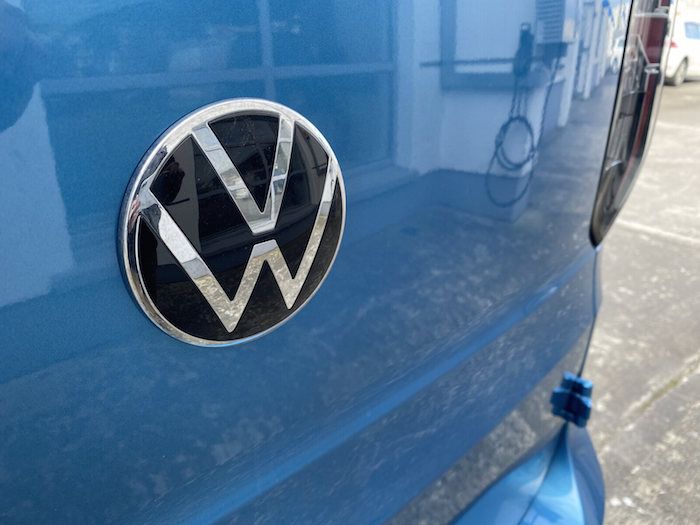