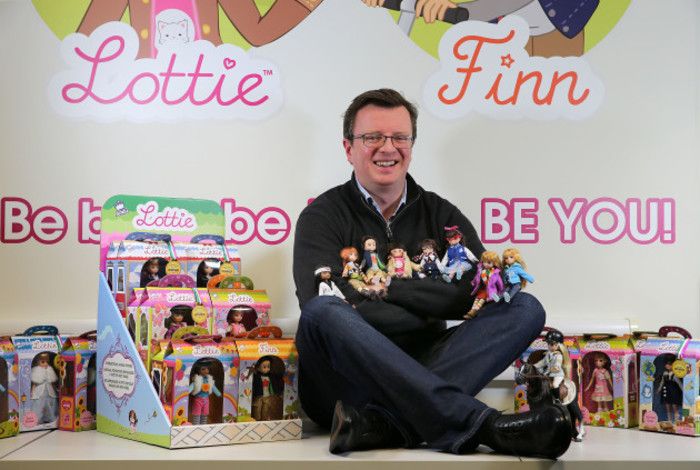 Toymakers should stop making ultra-thin dolls, because they create poor body image in young girls which can lead to eating disorders.

That’s according to leading Irish doll manufacturer, Ian Harkin of Lottie Dolls in Letterkenny, who’s body-realistic dolls were part of a recent study.

However, if girls played with the ultra-thin dolls before the realistic dolls, their ideal body size remained thinner, says Ian whose company Arklu is based at the CoLab at the LYIT.

“This shows that you cannot immediately counteract the effects of playing with ultra-thin dolls by playing with other toys. So, the best way to protect girls’ wellbeing is to stop making skinny dolls.”

The study, published in the academic journal Body Image, was conducted by researchers from Durham University, Newcastle University and Northumbria University. It was conducted independently from doll manufacturers.

The research was led by Durham University Psychologist, Professor Lynda Boothroyd. In an official statement released this morning, Dr Boothroyd said body dissatisfaction “is a huge problem, particularly amongst young girls. It can have serious consequences for girls’ wellbeing and lead to eating disorders and depression.”

Ian says this latest study is “the most comprehensive report to date on the impact of skinny dolls on girl’s perception of their own body shape. It’s time for manufacturers, retailers, toy associations and toy awards to take positive action and stop promoting dolls with unrealistic body shapes in the market. Toy industry professionals have read these reports but continue to ignore the findings.”

“Alarmingly, 95% of the dolls that parents can actually purchase online or in stores are the ultra-thin type. It’s hard for parents to refuse them when they are heavily marketed directly to young girls.”

According to Harkin, toy manufacturers are missing out on an opportunity to develop empathy in kids.

“Instead of teaching kids they all need to look the same, why not teach them to embrace who they are, and include other kids instead? We develop dolls with diverse skin colours, body sizes, and abilities, precisely because we want to promote positive self-image, and instil values of kindness and inclusivity.”