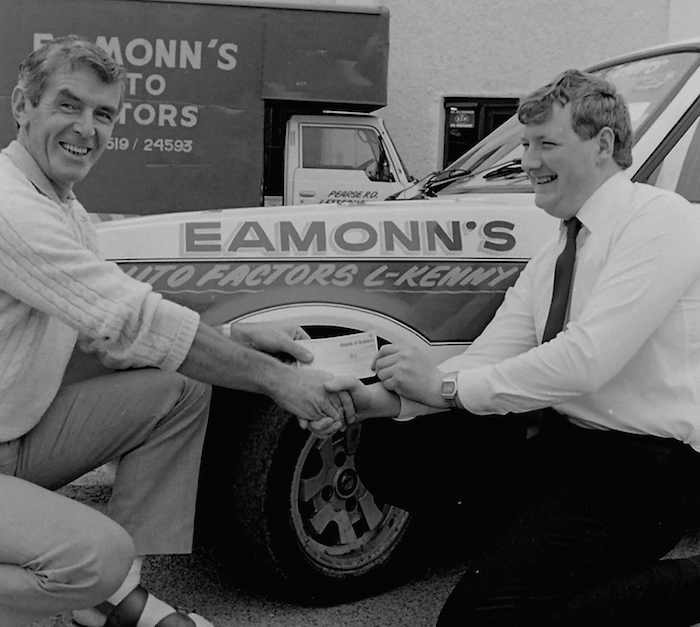 A local version of the great rallying team boss David Richards comes to mind when I think of a package put together by a young Donegal man back in 1987.

It was a time when tarmac rallying in Ireland was on hold because of a massive insurance hike.

At the end of a Donegal motor club meeting at the Mount Errigal Hotel one evening a young Steven Sheridan struck up a conversation with the then Driver’s club champion for the previous year Eamon Harvey.

Steven approached Eamon with the idea of competing on a rally up in Ballycastle, a one day event run on tarmac in a Forest Park. 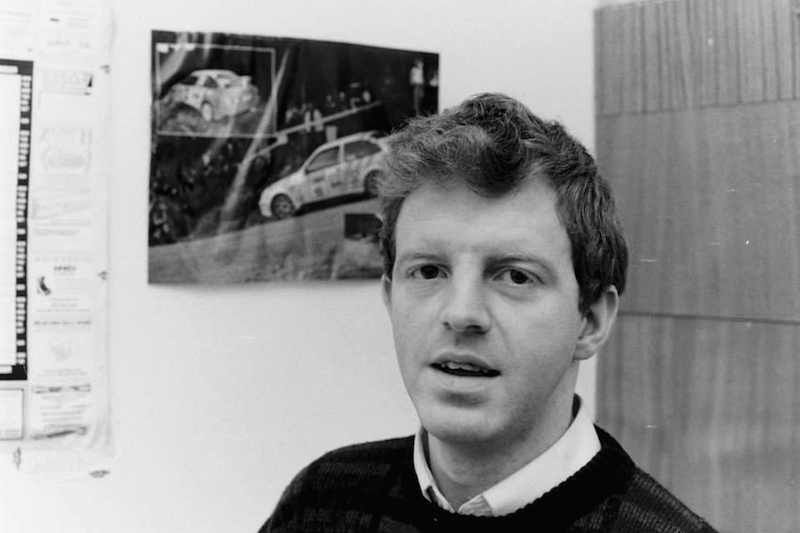 A young Steven Sheridan in the 1980’s when he got to navigate for his hero Eamon Harvey . Photo Brian McDaid.

Eamon would have competed in most of the rallies in Ireland and even went as far as the Isle of Man to compete on the Manx, but budget more than anything else made him choose home events like the hills, the harvest and the Donegal International. So for Eamon to do a rally that was two hours up the road he would need transport for his car to get to this event organised by the Mid Antrim Motor Club.

Steven went in search of wheels and succeeded in not only getting transport but through Pat Dunnion, a rally preparation specialist in the days from Stranorlar, he secured a very special Ford Transit service van to haul Eamon’s rally car to Ballycastle.

At a first glance, this old worn looking blue twin wheel transit didn’t look much but once you turned the key expecting a diesel engine to fire up, you were greeted with the gurgle of an Essex V6 petrol power plant that could go like the hammers.

Stephen collected the transit and trailer and headed for Letterkenny and after he did a few laps of the town as you do when you’re driving something with the sound of a V6 onboard before preparing for his rally the next day.

On the Saturday morning, Eamon landed down with his Sunbeam and got loaded up and ready for the road. 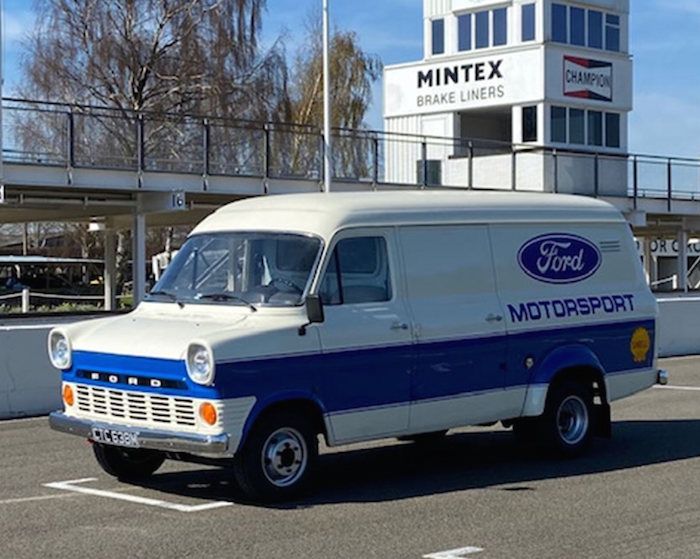 Our transit look nothing like this on the outside but it had all the bits on the inside to make it go like the hammers.

Anyone that knew the late Eamon Harvey knew that if he was on board it would be him that would be driving, that has always been the way, that was one seat sorted on the transit that morning but the problem was that a good few of us heard about the trip and with big a van was going was a good excuse to accommodate everyone.

Steven’s late mother Nellie even had to give up her settee out of the sitting room which was loaded on to the Transit. It might not have been the greatest of a colour match but in size it was a perfect fit in between the two arches of the twin wheel transit.

All loaded up and with all the triplicated documentation for the customs for the spares onboard the rally crew crossed the border. Heading into the new Foyle Bridge with Eamon at the wheel he gave the Big V6 its head. As he climbed the bridge it was hard to believe that we were towing a twin wheel trailer and a rally car as the service van gathered speed. But as we headed out over the crest of the bridge we didn’t notice the R.U.C. at the bottom
on the bridge with a speed gun trainer on the building bonnet of our blue transit.
We sat like mice in our makeshift seating in the days before back seat belts were compulsory as Eamon being Eamon talked his way out of the fine.

We made our way over the hill to the North East coast sunshine making our makeshift people carrier like an oven but the Craic was good.

I sat many the day as a back seat passenger as a fellow fireman in the old fire engine going to a call and always admired Eamon driving no matter what he was driving, he made it look so easy, always in control.

The old transit had four forwards as it was the norm for these old transits but this transit had an overdrive with a flick switch on the top of the gear stick which looked like something out of a James Bond film. Every so often when on a good stretch of road Eamon would deploy that extra gear and the engine note would change in sound. 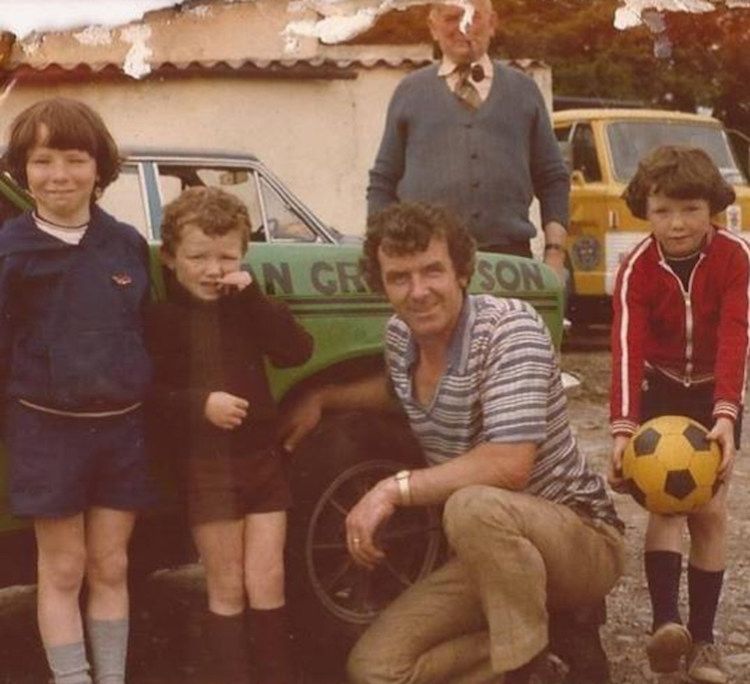 Eamon Harvey with his old green Avenger in the back ground, UIH 131 which he competed in events as far aways as the Isle of Man. his is pictured with, from left his sons Darren, Nigel (RIP) and Andrew, in the background is his late father Con and behind that is the nose of the Donegal County Council lorry.

We were all strangers when we arrived in the forest park in Ballycastle that day, all that was for Eamon who everyone seemed to know. A lot of these boys would have done the Donegal International over the years, and Eamon would have been one of those club men that they always could gauge their progress by comparing their time on stages that were done year after year.

One of the drivers there that day was Ken Colbert, his very unique rear-wheel drive Peugeot 205 which was one of the top seeds in the rally, a man that Eamon would have competed against in Donegal years before. JJI 205 was a beautifully prepared car which Eamon took great interest in that day as he and Colbert talked about the Donegal Rally of old.

Stephen found it hard to believe that he was navigating for Eamon Harvey that day, his childhood hero. He would be the first to admit that he fluffed up the notes on a few occasions but from the outside it didn’t look that way, Eamon’s professionalism more than covering for Steven’s mistakes.

There was a big pothole developing on one of the corners, on the stage that was used repeatedly, ‘Mark that somewhere in your notes for the next time’, Eamon would say to Steven each time they hit it on the way through. Things were going well as the day progressed but a big off by another competitor brought the last few runs over the stage to an early end.

We were supposed to be servicing Eamon’s sunbeam that day and we had our trolly jack and axle stand at the ready but I don’t believe we put a spanner on the car that day other than to dip it for oil at the end of the first run.

Eamon was the easiest on machinery and at the same time extract the greatest turn of speed from his Sunbeam, there were parts on that Sunbeam that were transferred from the first Avenger that he drove such was his care of equipment as he balanced a very fine budget that let him go rallying all of his career. 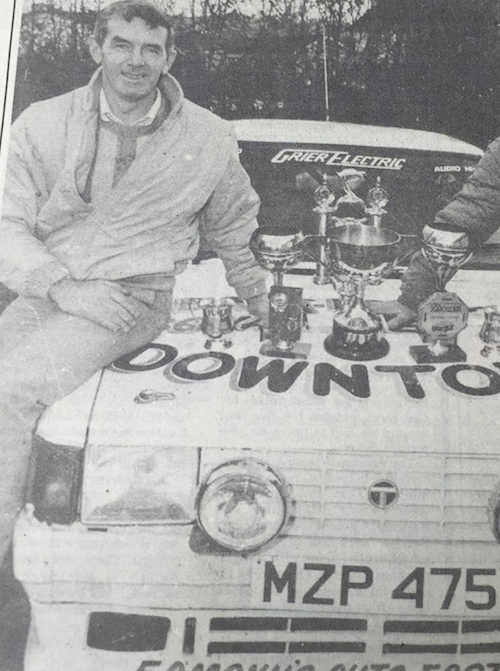 Eamon Harvey with a bonnet full of trophies in 1987 on his old Sunbeam . Photo Brian McDaid.

That afternoon we loaded up the Sunbeam with names on its panel from Letterkenny businesses like Eamon’s AutoFactors , Grier Electric and Downtown which would have been hand-painted in those days by sign-writers like Barry Mackey or John Baird onto the bodywork of the car.

On our journey home we stopped at a chipper and got fish suppers that tasted out of this world, the ones you would lick the bag that they came in after you were finished they were so tasty. And then further up the road to refuel the tank in the thirsty transit that managed to drink more petrol than the twin forties on the Sunbeam did, Eamon found a shop selling cones, something that I knew for days on the fire service that Eamon loved. 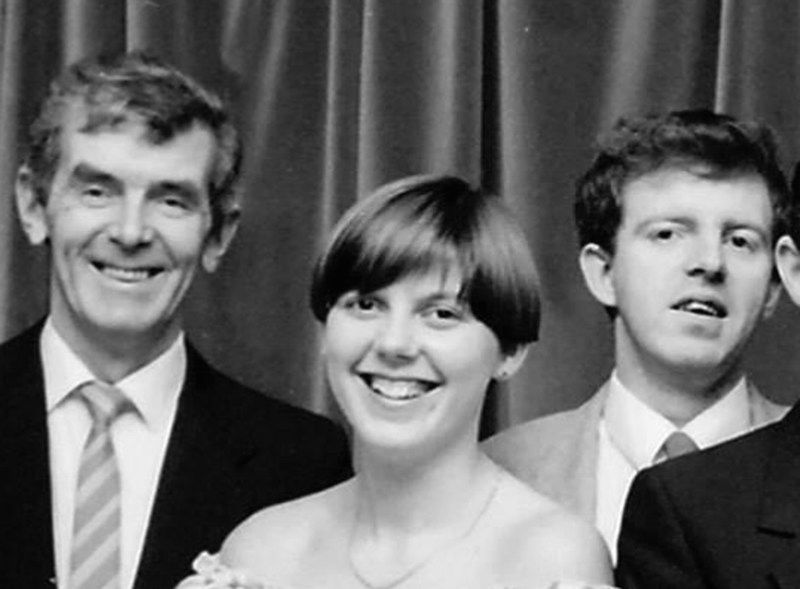 We were so hot on the road home, the air condition going as it was – two windows fully opened !! tittering up the road home tucking into our cones when a transit minibus passed us full of uniformed schoolboys who gave us a few gestures as they flew past. Eamon never said anything letting them go on until he finished off the last bit of his 99, then he shrugged his shoulders and dropped the transit down a few gears awaking the V6 as we headed into the hill. The minibus was getting it tight but Eamon had our transit a full tilt and we passed them as if they were standing still and we returned a few of their unwanted comments they had shared with us.

One day of lockdown memories of days out come to mind, of what we thought they meant to us at the time and how valuable they are as the years go by….. we were the Rothmans Team or D.T.V. team or whatever team was the top of the pops when we were growing up. One of our crowd, Steven Sheridan sat and navigated for our hero Eamon Harvey that day, he was our Flying Finn. Heading off in our ‘Works Ford Transit Service Van’ Eamon’s Sunbeam on tow and Nellie’s settee wedged in between the arches on a day when getting there was as good if not better than arriving. 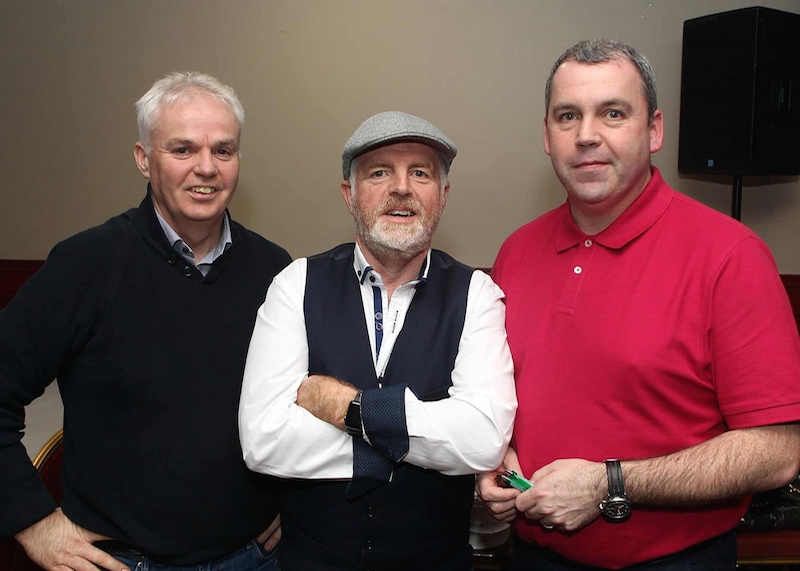 DD Motoring: The days we went into overdrive! was last modified: April 8th, 2021 by Brian McDaid