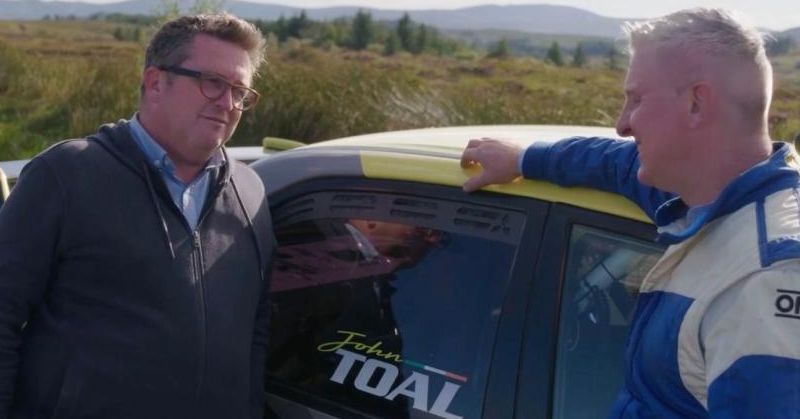 BBC series races to the hills of Donegal

A new BBC series is set to feature rallying stories and characters from Donegal tonight.

John Toal is back on our screens and on the road again for a second series of Irish Language Broadcast Fund show Croí Uladh le John Toal, starting Monday 12th April at 10pm on BBC Two Northern Ireland.

John sets off around Ulster in search of the stories and the characters that make this place so special. From a music lesson on the harp to fishing and singing for his supper, upcycling jewellery and re-creating the magic of Elvis, John goes to the heart of Ulster to tell fascinating stories.

In tonight’s episode, John takes to the back roads of Donegal in the shadow of Errigal mountain to meet the team behind Donegal Rally stalwart Gavin Kelly. John tests his skill as a co-driver with Eamon McGee and his nerve in the passenger seat as Gavin test-runs his car in the isolated splendour of Cashelnagor.

John also takes a trip down memory lane as he travels back to Arranmore, where he learned Irish as a teenager. John is treated to a musical performance from the Arranmore Pipe Band on the beach and meets some familiar faces.

The episode also takes in travels to Greyabbey in County Down and Queen’s University Belfast.

The series is produced by Big Mountain Productions for BBC Gaeilge.

BBC series races to the hills of Donegal was last modified: April 12th, 2021 by Rachel McLaughlin