Foyle Search and Rescue ‘levels up’ with drone technology

A NEW fleet of drones is helping to assist search-and-rescue operations along the River Foyle.

Foyle Search and Rescue overhauled its drone programme this year, with the addition of six new drones.

The Derry-based charity was formed in 1993 by local people in response to an alarmingly high number of lives being lost in the area that year.

The suicide prevention charity works with a number of local agencies to help preserve life in the North West.

New additions to the team’s fleet include ultra-lightweight deployable drones and a new flagship heavyweight drone with thermal imaging.

The heavyweight Matrice 300 drone, which is named Delta November 1, can be deployed in low-visibility operations and during adverse weather conditions. The flagship drone has been named ‘Delta November 1’ in honour of the late Danny Nelis, co-founder of the FSR drone/UAV program. 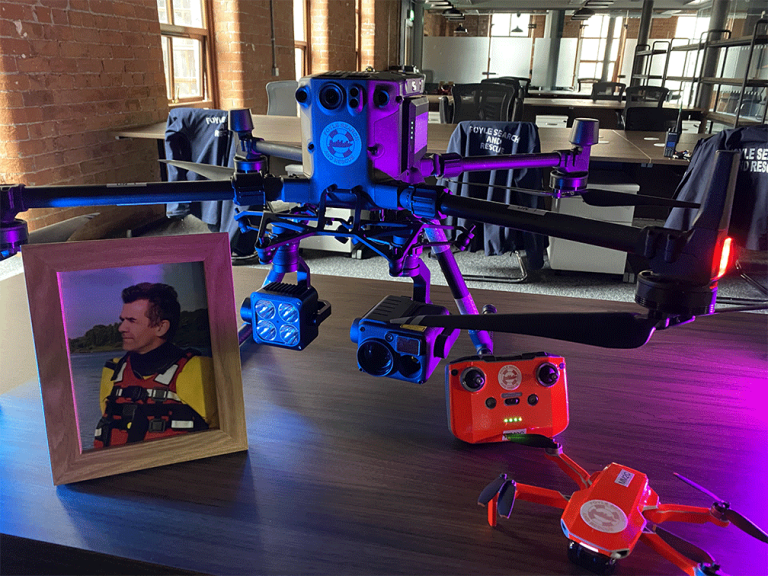 The flagship drone has been named Delta November 1. In honor of the late Danny Nelis, co founder of Foyle Search and Rescues drone team.

The drones upgrade followed a £39,000 donation from supporters in the local video games industry.

Pat Carlin, newly appointed Chairman of Foyle Search and Rescue, said: “We’re very appreciative of this donation. This new fleet of drones will allow us to expand our search and rescue capabilities as the drone team are now able to deploy at night time and in heavy rain or wind thanks to weatherproofing and high end thermal cameras.”