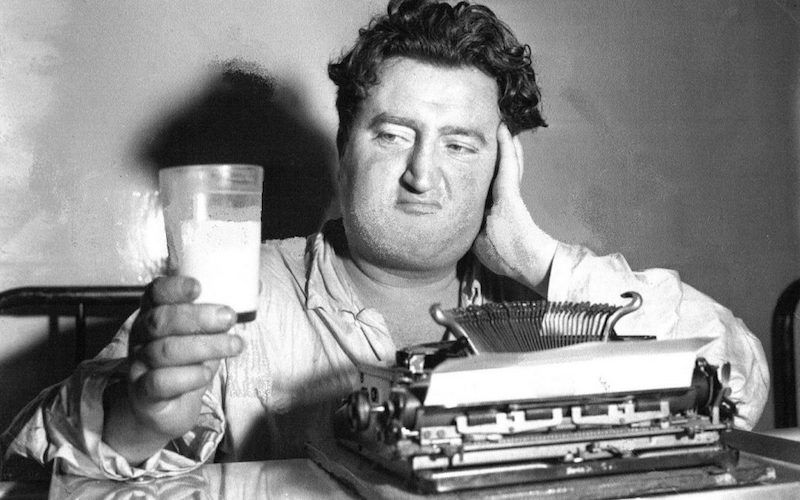 Brendan Behan is to be the theme of this year’s Cathedral Quarter Literary Festival in Letterkenny.

Behan is a giant in the pantheon of great Irish writers. Despite his early passing at the age of 41 in 1964, he left behind works of enduring fame including The Quare Fellow, The Hostage, Borstal Boy.

And in addition to that massive literary talent he had a huge personality, something that the people of Letterkenny were to experience full-on more than sixty years ago.

In 1961 Behan visited the Rainbow Bar on the town’s Main Street whilst holidaying in Donegal. According to a report in the ‘Derry People and Donegal News’ he entertained patrons ‘lucky enough to be there’ with ‘typically outspoken comments on affairs of the moment.”

The author, short story writer and playwright had also, according to the same report, visited the town the year previously whilst holidaying in the Glenties area. He must have liked something as he came back again!

So, to honour this connection with the great man the Letterkenny Cathedral Quarter committee has decided to make Behan and his works the central theme of this year’s Literary Festival. It should, by all accounts, be a most entertaining weekend

Speaking yesterday Cathedral Quarter Committee secretary, Donnan Harvey said they were delighted to put Behan centre stage. He pointed out that though his stays in Letterkenny were brief Behan had made them truly memorable.

He stated: “He was a unique person, a massive personality. For example, according to reports in the paper Brendan went to the La Scala Cinema at the Port Road to see a film in which he himself was featured. In the film he sang a song so when that came on the screen Brendan, sitting in the audience, started singing along.

“He claimed afterwards it would be the only time in the history of Letterkenny that a duet was song by one person!”

To get the planning for the event underway Donnan stated the Letterkenny Cathedral Quarter would like to invite interested individuals to a meeting, which will be held via Zoom, on Wednesday, April 28th starting at 8p.m. This is in keeping with Covid guidelines.

The sixth Annual Literary festival itself will be held on the weekend beginning Friday, 15 October.

As the Cathedral Quarter is run a purely voluntary basis Donnan Harvey has appealed to anyone out there who would like to offer some sponsorship to please come forward.

He explained: “We are a community-based organisation. Funding is always an issue. This year we hope to have some members of the Behan family participate. Finding accommodation and paying their expenses – hotels, meals etc – all cost money. In addition, paying for venues, transport and all sorts of other sundry expenses can be a massive drain on our limited resources. So, any financial help would be gratefully appreciated. Very gratefully appreciated!”

Mr. Harvey was at pains to stress as with previous years, the festival will, once again, be celebrating Donegal’s unique links with Jane Austen.

Finally, he expressed delight that while last year’s Literary Festival, which has held all online, was a tremendous success as it gave, he explained, a massive platform for many local artists to display their talents in story telling, writing, music and song he hopes this year’s event will be held as a live event where people can physically attend events.

If any group or individual would like to participate in the meeting, please contact the Festival Creative Director Sean Purser on (086) 377 7042 or Secretary Donnan Harvey on (086) 345 2457 or alternatively through the Cathedral Quarter social media pages.