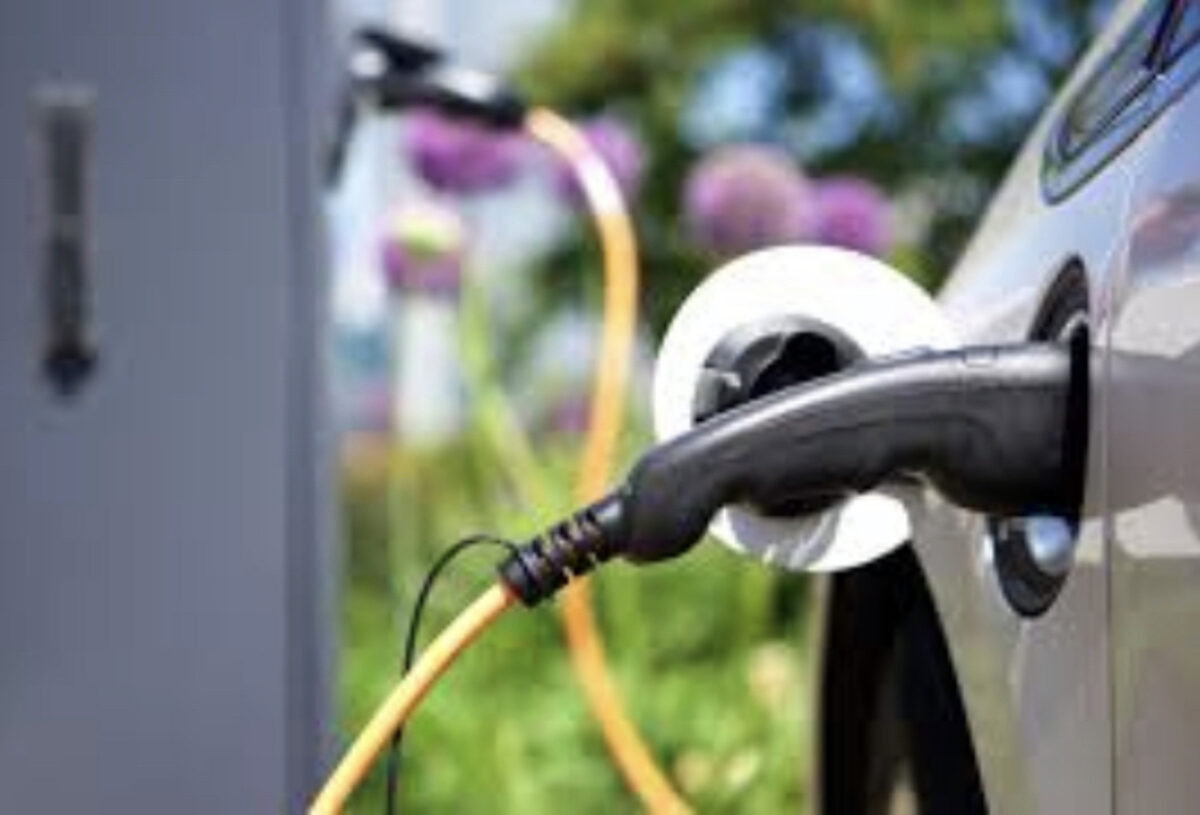 This week’s column from Brian McDaid recalls a catch-up with an old friend, and great memories from when the Bay City Rollers were in town.

It’s not that unusual to have to second guess someone when we meet them these days under a mask, hair is a little longer and for me a little greyer!

You’re looking at their eyes and listening to a voice and still you’re lost in the moment. It happened to me a few times but it was my life long friend ‘The Marshal’ who I ran into recently back on the road again and back in Donegal. His new car, a Nissan Leaf, all electric caught me off guard at a filling station in Letterkenny there he is talking away to me and I’m lost to know who he is, I think it might have been the fact that he had a passenger in the car that threw me, of all the years ‘The Marshal’ has been coming to Donegal it’s the first time I have ever seen anyone on with him in the car. I thought I was doing a middling job of letting on I know him, but he catches me second glancing his passenger, and follows through with ‘that’s my youngest, he’s doing the Leaving this year, his head was fried in the house. It’s the first time he come up to Donegal with me…and it might be the last, He won’t let me smoke in the car, did you ever hear the likes of it!’

Slipping his face mask (which is a scarf really) up onto his forehead he now looks like an old rock and roller. It looks like a bandana and with his back turned to the car he slips 20 cigarettes out of his pocket and lights up one and blows the smoke down the way not to be spotted. It’s the smell of his old lighter that is familiar to me. I never smoked, myself, tried them, even cigars but never really like them, but love the smell of a match or an old style lighter like he has lighting up.

‘College of life, that’s what we got, no university in our day, get out and get a job.’ Looking at his son, he says: ‘his sister went to the I.T. in Sligo, he’s chatting about Dublin, that’s if SUSI comes through for us,’ he says.

We were both two or three years younger than his son sitting there when we first met to The Marshal on Knockalla on the Donegal Rally all them years ago. I think I was doing my group cert that year, and might have skipped an exam on the Friday afternoon to see the opening day of the rally.

‘Does it take long to charge that yok,’ I asked, “aye she’s not too bad, it’s the quickest yok away from lights that I have ever driven, but you pay for it, sucks the life out of the charge. Aye it’s a company car, our crowd are all doing a big green drive thing, they recon it helps the profile of the company,’ he says as he blows a big plume of cigarette smoke out and then gives a big hearty laugh.

I needed the jump leads myself there a few months ago.

I got a few old stents in since the last time I was chatting to you. I felt a tightness on my chest one evening coming out of Carrick on Shannon, ended up in Sligo General that evening and I was in Galway the following morning on the table, me awake and all, three stents in there, as he points to his right arm.

I look at my friend, the two of us sitting on a wall at a filling station, and no more in than myself, this lockdown has taken a lot out of him. It never crossed my mind that he was dying his hair over the years, now it’s got very grey, I think it looks far better grey, but I try to let on that I don’t really notice it.

He said: ‘I have seen more of that fella of mine since Christmas that I seen of him since he was ten, The Marshal says as he looks into car. I suppose when this old lockdown lifts he’ll be lost in space again online with his friends on his computer thing in his room.

‘I had my own car when I was younger than him, waiting for my birthday to come so I could get on the road, he has no interest in driving except if it’s that old PlayStation, he spends days and night driving that.’

‘All sorted if I could give up these old Benson and Hedges, but I’m not ready to give them up yet.’

The Marshal might have not mastered giving up smoking yet but he has slowed down a bit, his young fellow opens his passenger door to tell his father that the car is 80% charged.

‘Will that get you home this evening?’, I ask The Marshal.

He replies: ‘Aye it will, as long as the boy in me doesn’t race anyone away from a set of traffic lights on the way home!’ 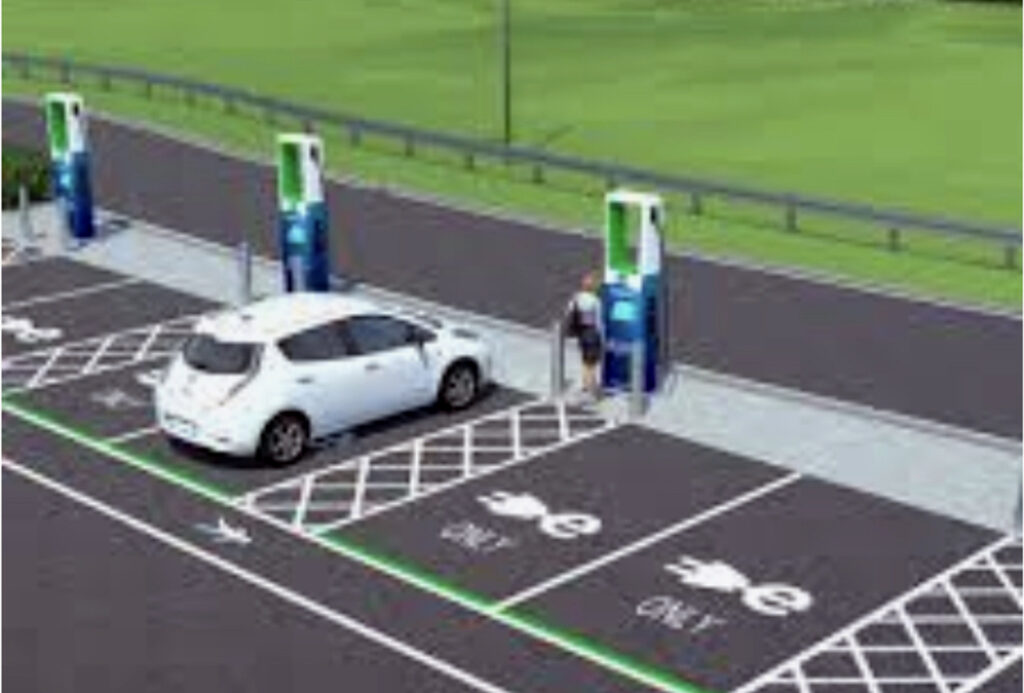 The theory of what electric charging stations look like is different to what they look like around Ireland.

‘Stand out there the two of you to I get a picture of yous’ I suggest. ‘I will in my arse, you know me and pictures sir’ is his reply.

The more The Marshal says the reason his son came up to Donegal with him was to give him a break from studying, I think that it could be that it’s The Marshal that needed the support to build his confidence to get back on the road again. As another electric car pulls up along side and The Marshal signals that he is nearly finished and the sight of him, Benson and Hedges in his mouth, as he unplugs his leaf from the pump.

The driver of the other car is not impressed with The Marshal and give me a nod of the head out of their line of sight as he pulls his electric car out of the charging bay and with toot of the electric horn he is on his road.

Bay City Rollers lead singer Les McKeown sadly passed away suddenly last week, he was only 65. I can remember Letterkenny in the 70’s awash with tartan, platform shoes and them 70’s hair cuts when the band was at the height of their success. 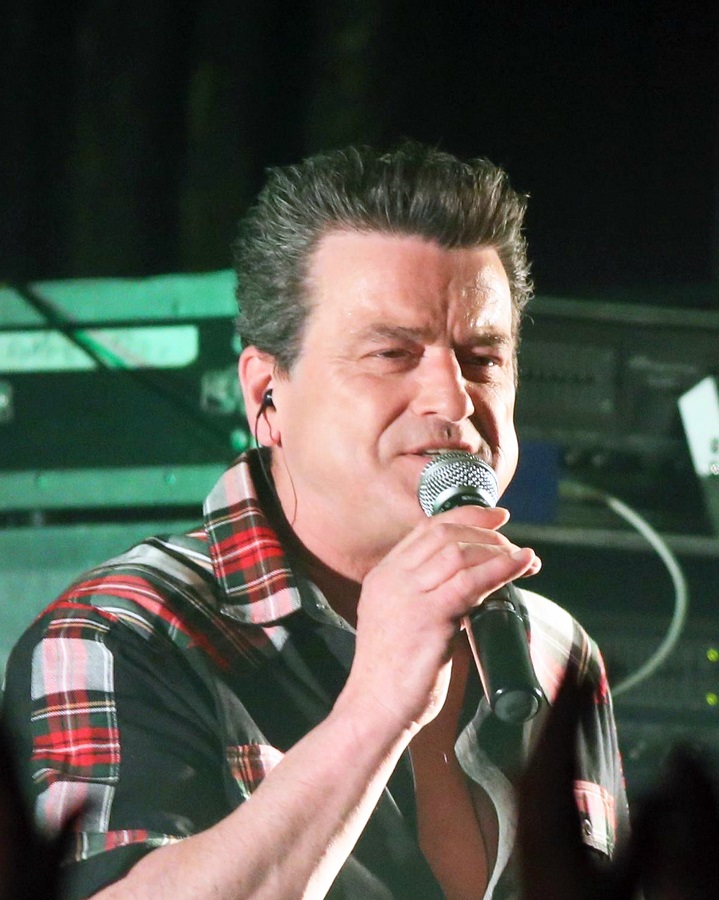 The Late Les Mc Keown on stage at the Mt. Errigal Hotel with his band the Bay City Rollers in 2015. photo Brian McDaid.

A friend from my school days, John McGeever from Ballymacool Terrace, was the wain in his family, his older sisters Laura, Mary, Kathleen and Bridie were into their music and style in the days. John would always know the latest pop music in them days from bands like The Brotherhood of Man and Bay City Rollers, Some of John’s sisters went to work in Oatfield’s Sweet Factory when they left school, I can always remember the style of them walking over the row in Ballymacool in Letterkenny big platform shoes, the tartan and the haircuts. 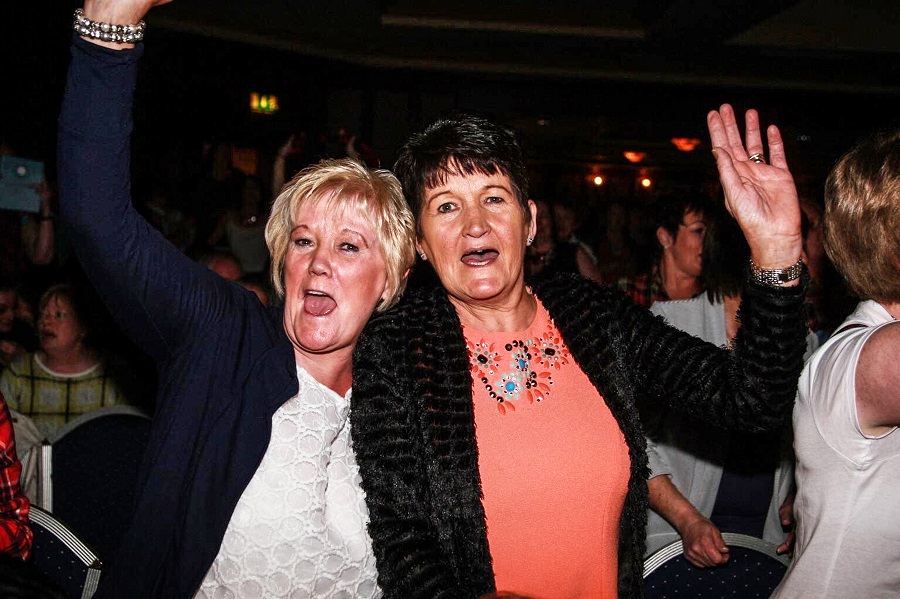 Two of the original Bay City Roller fans, Letterkenny sisters Bridie O’Kane and the late Kathleen Purtil in full song at the Mt Errigal Hotel in 2015 for the for their teen idols live gig. Photo Brian McDaid.

I never could say I could name anyone from any band from the 70’s I just loved the music they made, that changed for me some 40 years on in 2015 when the Bay City Rollers played in the Mount Errigal Hotel in Letterkenny. All I can say was that you just had to be there that famous night to see Bay City Roller fans, some possibly seeing their favourite band for the first time ever live on stage amazed to see them in their own town, on stage in Letterkenny. With nothing more than the old vinyl records played over and over, Top of the Pops appearances on TV or a DJ playing your favourite song at a disco or just dancing away in the kitchen to the music on the radio in Ballymacool.

Les Mc Keown changed that and made that big connection that night for the packed house in the Mount Errigal Hotel fans reliving those hazy days of their youth as the bands stuck the right cord every time playing the hits from the 70s, The passing of the band’s lead singer Les McKeown last week sadden a lot of us that loved their music and their 2015 tour which included Letterkenny. So many faces from around Letterkenny made it to the Mount Errigal that night. Some with ‘I love Les’ cut out of tartan and stitched to T-shirts. And there in the crowd was my connection with the Bay City Rollers, John McGeever’s two sisters Bridie and the late Kathleen engrossed in song at the concert belting out one of the many number ones that this 70’s band brought us.

It’s probably an odd connection but for me Les Mc Keown, Kathleen Purtil (John’s Sister) and Oatfield Sweet factory and Bay City Rollers are all a part of my youth that are sadly gone but their memories live on. 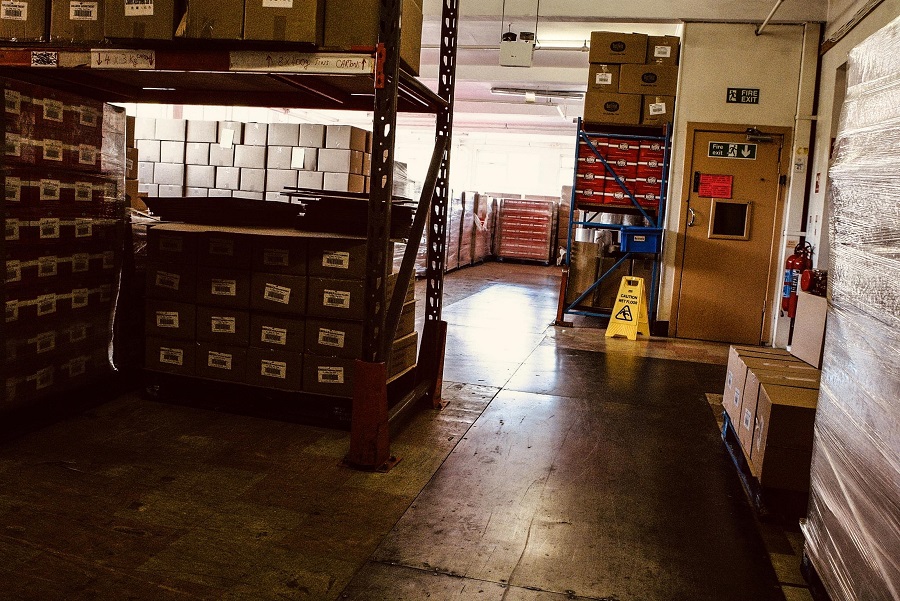 A view of the Oatfield Sweet factory before is closed its doors in Letterkenny for good. Photo Brian McDaid.