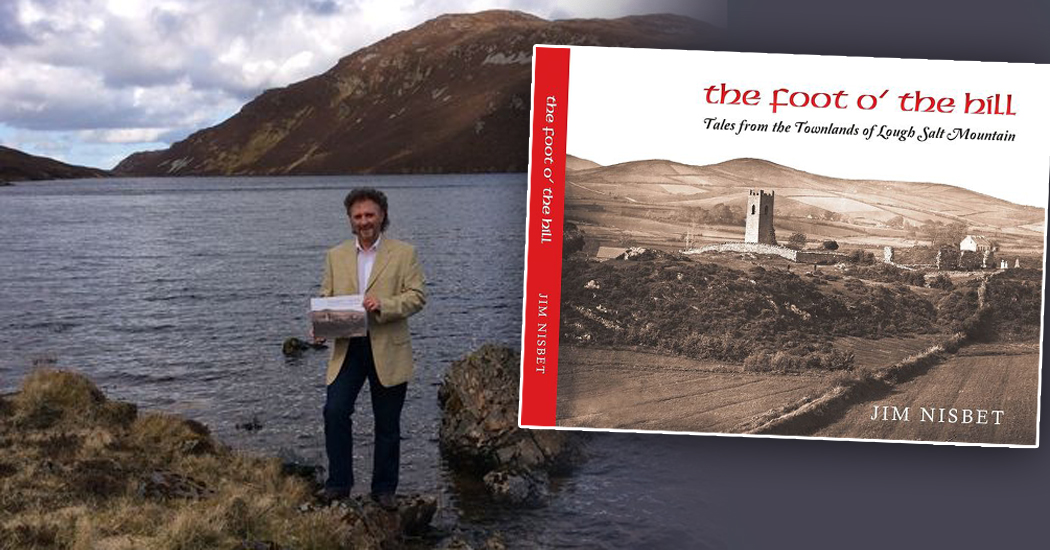 History and folklore of Lough Salt retold in fascinating book

Ramelton man Jim Nisbet has ‘poked his nose into the past’ to produce a new book about Donegal’s Lough Salt mountain.

The book, entitled The Foot o’ the Hill, tells stories and folklore from the slopes of Lough Salt Mountain and its surrounding townlands.

Nisbet’s publication is the result of many hours of conversations and research in the local community. The result is a fascinating read about an area steeped in history and mythology. 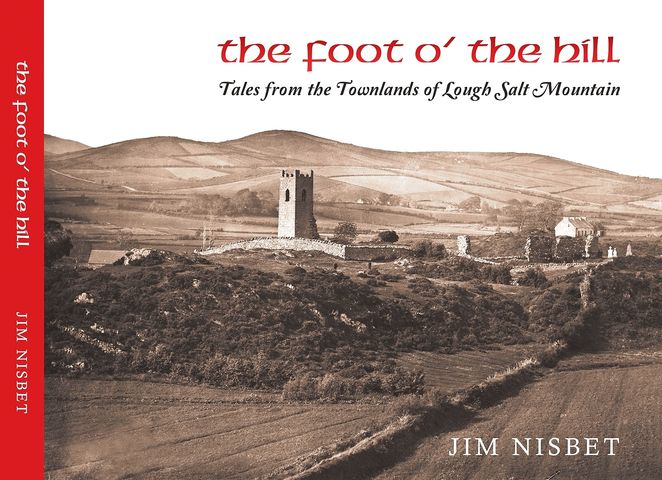 Here, Nisbet offers a glimpse into The Foot o’ the Hill:

Rising regally o’er the Kilmacrenan countryside, the slopes of Lough Salt Mountain are renowned for their breathtaking beauty, rich vein of heritage and wonderful wealth of tales.

The casual traveller to Donegal would scarcely give this sparsely populated spot a second thought, paying scant regard to the abandoned broken farmsteads, tousled gorse hedges and sleepy fields lying fallow. Surprisingly, few other settings have such a captivating and colourful past; a microcosm of Ireland’s story from prehistory to present.

It was a breezy autumn evening, 1991, when I first arrived with my wife, Tricia, at a whitewashed cottage in Casheleenan, on the outskirts of Kilmacrenan. Driving down the leaf-speckled lane, we were warmly welcomed at the green-mantled door by her uncle, Willie Barney O’Donnell.

A living chronicle of the narratives of the district, with a computer-like capacity for conveying dates and details, I was hooked on Willie’s every word as he regaled us with yarns from days of yore.

Harking back to his boyhood, Willie Barney once told of gazing up towards the towering crest as winter’s early dusk descended over its braes. As the first few sprinklings of lights appeared, he could put a name to every one—Duffy; McAuley; Cullen; Gordon; Lynagh; Wasson, McKay and McGettigan—until the hill was fully aglow with flickering candles, luminous lamps and fiery hearths shining brightly from cottage windows. Meanwhile, in the direction of Letterkenny, blackness beckoned.

But the march of time brings change. In contrast, vast zones of land in nearby towns and villages, each inch soaked in history, are now smothered by suburbs while the slopes of Lough Salt Mountain, once home to over 2,000 souls, are now shrouded in darkness.

Inspired by Willie Barney O’Donnell’s love of local history and happenings, I set out to collect and document others’ recollections of the surrounding townlands. I wandered merrily through neighbours’ knowledge and wallowed elbow-deep in a muddle of notes. Thumbing through tattered ledgers, musty documents and yellow-faded registers, the names and odours of the past awakened my senses to those who had gone before—the very people who lived the history I now peered over.

There were faces, voices, the sound of the cock crowing, the clanging echo of Friel’s anvil resounding off Termon’s hills, the all-pervading aroma of burning peat and retting flax, the sight of celebrants secretly congregated around Casheleenan’s sacred scáthlán and barefooted children—soles as hard as horse hoofs—on their way to the Goldrum “Academy”, the local hedge school. This was the stage where they played out their lives, little different to that of their forefathers. I

In these quickly changing times of New Ireland, countless folks risk losing sight of their roots. If we choose to discard, or even trash, the treasures of the past, we shed something precious. Even so, we are all children of history. Pride of place and a sense of yesteryear are a vital part of who we are, and when this association is acknowledged there is often a willingness to preserve it for posterity.

Mindful of that profound connection, this book respectfully attempts to capture the passing memories of many who settled on the sides of Lough Salt Mountain, together with an awesome heritage that moulded and made them. Hopefully, the pages of The Foot o’ the Hill will prove to be not only a celebration in picture, poetry and prose of all long gone sorts, but also entertaining to the present populace and enlightening for those yet to come. 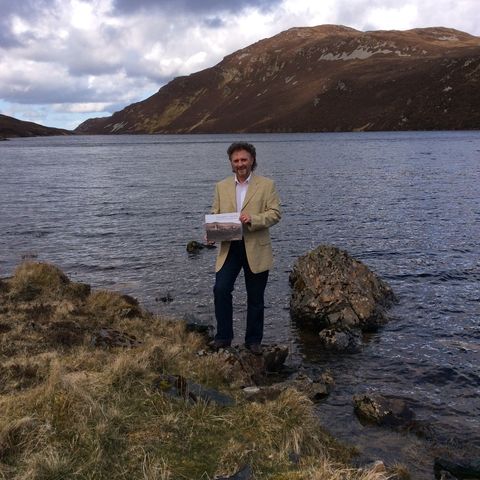 A book can bolster pride and strengthen identity with a person’s neighbourhood. But even more, a publication such as The Foot o’ the Hill can instil a great community effort, often unknown to the contributors. Nothing gives one a special thrill more, than to find a book set in your own backyard, particularly when it’s discovered that your input forms part of the pages.

Significantly, this book is the fruit of many, who provided their time, energy, knowledge and sponsorship so freely. Therefore, I wish to express my gratitude to an astonishing number of people from Kilmacrenan, Termon, Glen, Milford and beyond for their unfailing help in compiling this book.

A lot of local folklore can be a series of contradictions, depending on which parish or townland you visit or what family or individual you listen to. I am no lauded historian, just an enthusiastic amateur and scribbler, so in dealing with subjects, where I have obtained different viewpoints or invented memories, I have tried to present as fair account as possible, though often the least plausible version is by far the most entertaining!

Sadly, in the course of the last few decades, two wondrous windows into the past of the district, amongst others, have been devastated—the home place of Captain Manus a’ Phíce the United Irishman leader and Doon Rock, now, perhaps, the only tarmac topped pre-historical monument in the world.

The ignorance and avarice of a tiny minority have derived irreparable damage and irretrievable loss to Donegal’s historical landscape.

It is an extraordinary state of affairs when people care more about the monuments and the battles of foreign lands, than the tales of the ruined abbey which they hurriedly travel by each day or the rebellion that occurred on their doorsteps. Is it, therefore, surprising that those oblivious to priceless ancient treasures fail to cherish or protect those in their own community?

There is an obligation on all to safeguard monuments and respect their memories, as did previous generations. May the present generation learn their vital importance to understanding the past and play their part in preserving not only the heritage of Kilmacrenan and Termon but of all Donegal.

The most frequent quote I came across when interviewing people was: “I wished I’d paid more attention to the older ones when they were alive.” On browsing through The Foot o’ the Hill, no doubt reminiscences will stir up that previously washed over them. With older relatives, neighbours and friends slipping away, perhaps this may stimulate families to a call to action and a reunion with their roots and present a greater portrait of their locality.

It should not be overlooked that much enriched information is in the hands of many emigrants, even if they themselves do not appreciate the importance. Also, how much undiscovered history is hidden in suitcases in attics or gathering dust under the bed?

History is more than earth-shattering events or gallant individuals recorded by literary academics. Seldom are the “common” people of Donegal acclaimed as anything more than superfluous statistics, whose life narratives somehow fade into a forgotten historical haze—their tales do not deserve to die.

Every rock and field has its story and every story needs a listener. The challenge now is to see how this legacy can be saved and transmitted to future generations and strive to accomplish a fuller picture.  If each in their own townland uncovered intriguing information and prudently put pen to paper, I’m certain a great deal of invaluable material throughout Donegal could be collected and catalogued.

More power to those who poke their noses into the past!