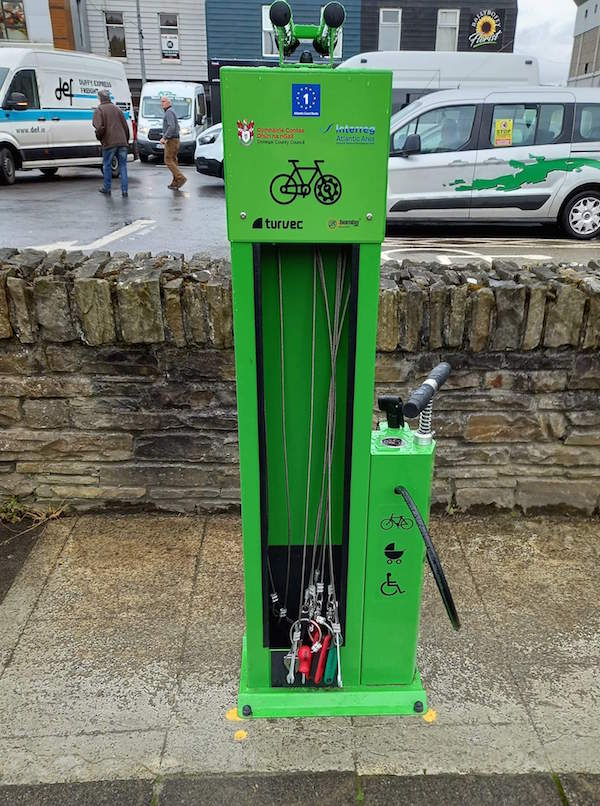 Donegal cyclists get their “fix’ with new repair stations

Cyclists across Donegal will no longer have to worry about being stuck without tools to carry out repairs following a new project rolled out by Donegal County Council.

The council are in the process of erecting a number of public bike repair stations in a number of towns.

Two of the innovative stations have already been set up in both Letterkenny and Balybofey this week.

The stations comprise of a variety of repair tools for cyclists who find themselves in difficult situations while out for a ride.

It also contains a pump for cyclists who are running a little low on air!

The scheme, which is supported by Interreg, looks set to be a huge addition to the Donegal public’s plans to get out and about.

Donegal county councillor Patrick McGowan said he welcomed the development and hoped as many of the repair stations were placed across the county as possible.

“It’s such a welcome development considering we are promoting all that is green about Donegal and the benefits of exercise.

“Cycling is a hugely popular past-time for young and old like in Donegal and this will be a huge practical benefit for any cyclist who find themselves stuck.

“I know there are two in Letterkenny and Balybofey and I hope as many as possible are rolled out across the county,” he said.

Donegal cyclists get their “fix’ with new repair stations was last modified: May 12th, 2021 by Staff Writer