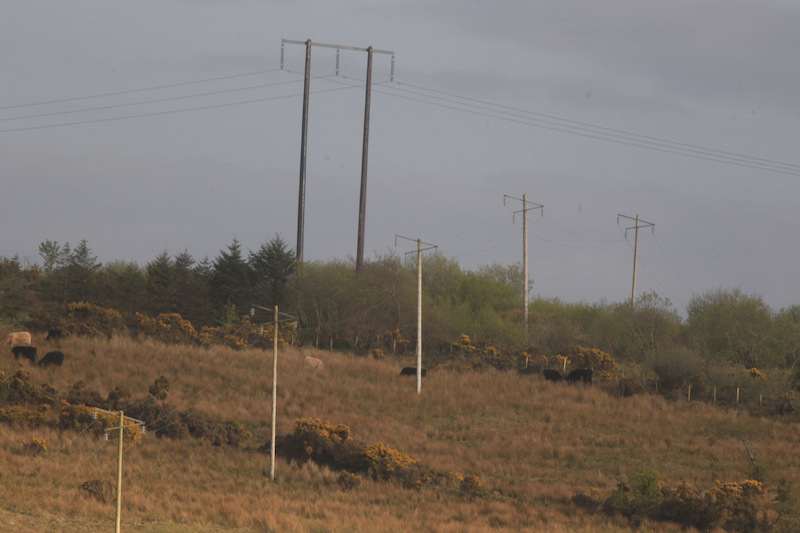 “That’s the 38 line, you’ll always remember it, you’ll know it by its cross-arms, they were designed by a German.” It was always where our conversation started, on our way through Barnesmore Gap.

“That power line was there before I started working for the ESB in 51,” my father would reminisce. (The 38 KVA line means 38,000 volts which in his early days of the ESB was enough power to cover supply.)

The electricity wires, poles, and cross-arms have probably been replaced since this line first made its way through Barnesmore Gap but the unique design of it is still the same. It was there when the trains and rail cars were running and is still there today.

It was the first part of the ESB network to makes its way into Donegal, in those years most towns had private operators generating power for the towns, in Ramelton

For example, it was Robert John Campbell, father of the Nobel Prize winner William Campbell who had a generator in the town and provided electricity locally. Mc Mahon Brothers in Milford the garage owners provided power for Milford.

In 1932 Letterkenny had 31 street lights powered by electricity, it had two businesses in the town producing electricity, Alexander Wallace who was based where the old foundry was, now the skittle alley and car park at the foot of the town and J McCauley’s at the other end of the town supplied that end. Between both businesses were supplying only 5 or 6 customers in Letterkenny. The ESB bought out both private companies and built their own power generating station on the Back Rd which still stands today and houses the Architects business of MH Associates. 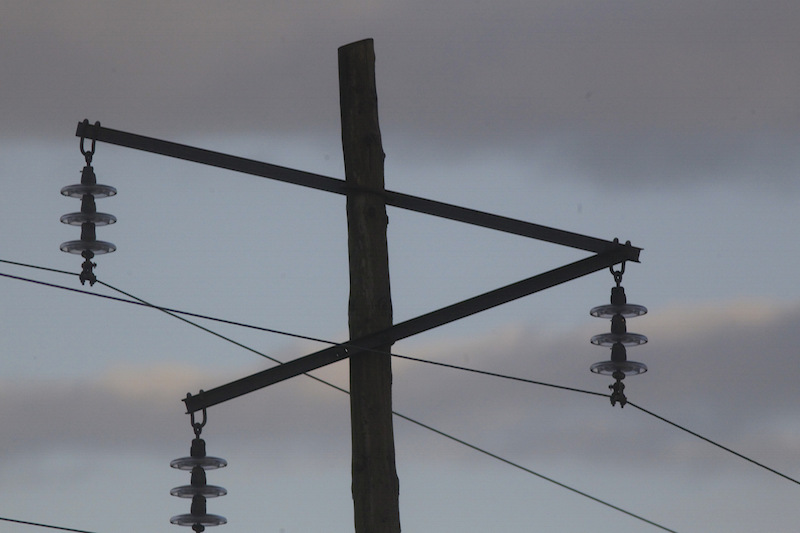 A view of the very unique old 39kVA ESB lines that was one of the first delivery of power to donegal and is still in operation today. Photo Brian Mc Daid

Somewhere in the middle of these years between 1932 and today back in the very early 1970’s my father would give me a history lesson on the ESB’s journey into Donegal on our way to Sligo.

Daddy drove a lorry for the ESB and hauled lorry loads of materials from Sligo to Letterkenny for the upkeep of the ESB network in this part of Donegal. On days I should have been at school and didn’t go, daddy would take me with him to Sligo.

He told the story about one of the first places to get power from the national network grid from the ESB through the old 38 line which was Convoy Woollen Mill. But it had a power supplier before that, from Northern Ireland coming out from Strabane.

It was considered an essential service factory which produced wool for uniforms for both First and the Second World War, so the first location that the old power line went from the newly built Cathaleen Fall hydro-electric station in Ballyshannon made its way through Barnes more gap and went in down as far as Convoy before heading to its final destination Letterkenny at the power station at the top of Lurgybrack.

When Letterkenny was connected to the national grid in the 1950s the old generator on the Back Road was switched off and the building was made into a store from the rolling out of Rural Electrification. That’s where my father got his first job working for the ESB. And it’s where he met my mother in the nearby corner shop.

Locally on the Back Road residents were complaining about the lack of noise at night because they were so used to the sound of the generator working away in the background they were unable to sleep with the quietness of the night.

A view of the very unique old 39kVA ESB lines that was one of the first delivery of power to donegal and is still in operation today. Photo Brian Mc Daid

The fresh colour of new leaves is always a beautiful sight on the trees. This year it’s different because we went through the lockdown were in hibernation all winter, and coming out of much-needed travel restrictions, we have put up with more than a harsh winter.

I have always loved driving about at this time of year watching the country change and that bright shade of vibrant green that the trees have when they appear for the first time. It’s the opposite of a colour that I recently heard mentioned called ‘Go away Green’ a colour that was thought up by big parks like Disney to paint administration and operational buildings so that the visitors’ eyes would pass over those parts of the park and the more vibrant colours would draw the public to the parts of the park where they wanted them to spend more money.

On one of my journeys this week on the old road from Letterkenny to Convoy, admiring the colours of summer on the trees along the roadside as they start to cover over where the old Letterkenny to Strabane railway once ran. As the train line runs alongside from Glenmaquin station below the road crossing the road under the humpback bridge before it disappears into the countryside on the upper side. 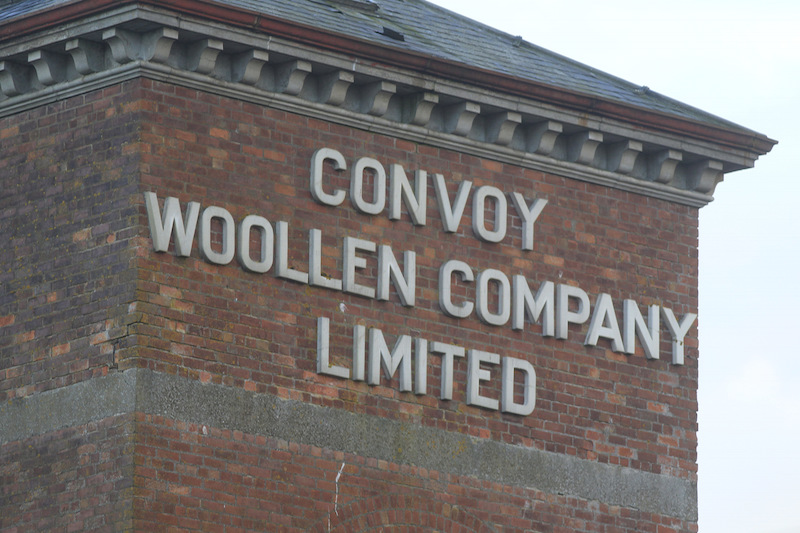 Convoy Wollen Mill which powered from Northern Ireland and was one of the first industrial building to be connected to the ESB national Grid with the old 38 power line that came from Ballyshannon power station on its way to Letterkenny. Photo Brian McDaid.

As I came nearer to Convoy an ESB power line crossed over the road Its polls were faded but the design I was familiar with from my days away with my father to Sligo. It was a power line that has a very unique way of carrying power lines attached to the poles: two steel supports like small steel girders made into two sides of a triangle and when they were bolted to either side of the pole they made for a very robust structure.

My eye followed the line as it left the direction the road was going and headed over the hill. It was a summers evening and I had time on my hands so when I went up
on to the main Letterkenny to Ballybofey road and search for the old power line to see if I could pick it out on its way into Letterkenny. A few miles up the road there it was coming over the hillside straight as a die heading into Cullion Power Station in Letterkenny.

Towering over this old 38 line coming into Letterkenny is a bigger double pole power line that criss-crosses over the top of it on its approach into the same power station. As I glanced along the skyline I spotted the RTE transmitter going higher than everything and suddenly remembered a running conversation in our home when we were wanes growing up. 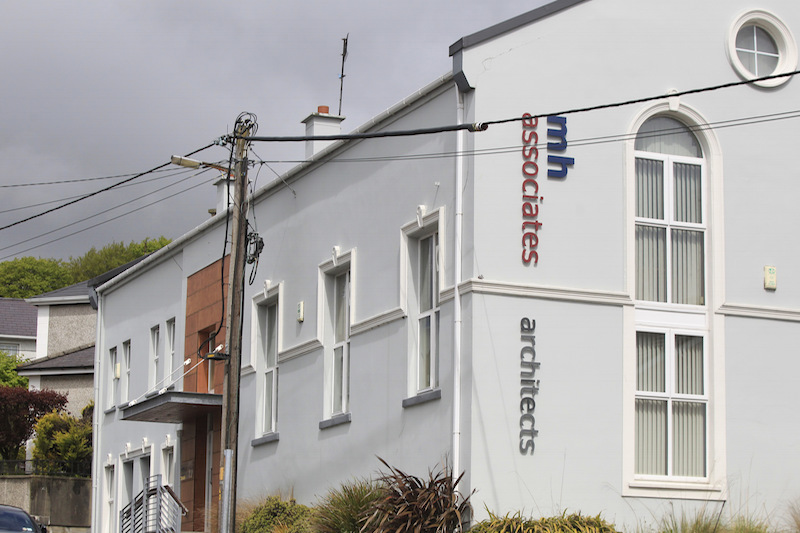 One of the old polls on the Back Road outside the old ESB Power station on the Back Rd now used by local business MH Associates. Photo Brian McDaid.

It was a conversation about the first word I was supposed to have said as a child. For a while my mother was all proud thinking I was trying to say mummy but they soon realised one evening when my father had returned home from work and they were both having a conversation about how their day went, that they realised that I was trying to repeat the location where my father was working at the time. Where he was plotting out the location the power line out from Cullion power station to a location high on the hillside for where the new RTE transmitter at Mongory was being built. For weeks the only word I would try and say was Mongory, Mongory, Mongory!

So one Sunday afternoon my father took us up for a spin to see the new transmitter. Expecting me to be overjoyed at seeing what I was trying to say for weeks but were disappointed at my terror when my father got me out of the car and pointed up to the sky at the massive TV mast and said ‘there now son, that’s MONGORY.” The story goes I was that terrified of it and couldn’t wait to get back into the safety of the car and they never heard me trying to say that new first word ever again.

On the days in the 1970’s on trips to Sligo my daddy chatted about all these different parts that made up the ESB network, from the old 38 line which was the history to the new upgraded line at that time, a 110 kVA line which he said was built to supply the newly built Courtaulds factory in Letterkenny. 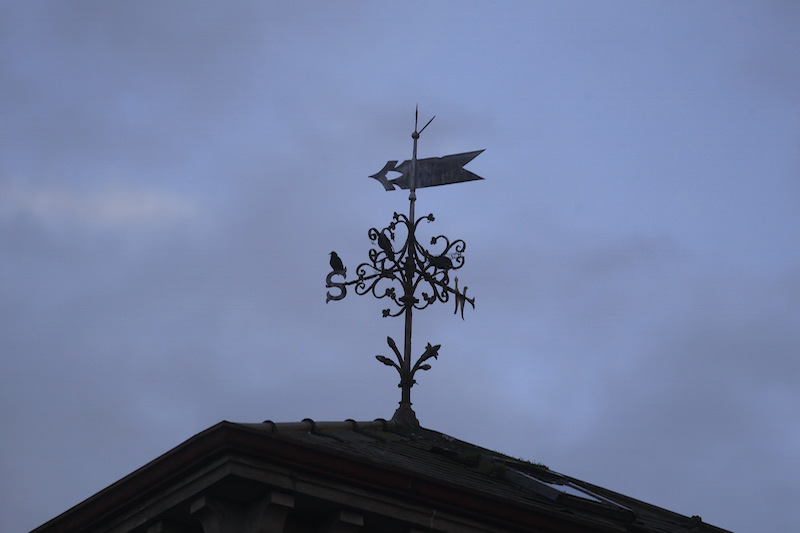 The old wind vain on the top of Convoy mill pointing north and south to where it once got its power supply from both sides of the border. Photo Brian McDaid.

Today the power lines still come through the gap but them big factories like Convoy Woollen Mill have changed their use to an enterprise centre and Courtaulds which became Unifi one of the biggest employers of its time but now long gone.

The power line that my father pegged out in the 1960’s still makes its way up to Mongory’s RTE transmitter mast but it’s more likely that my mobile phone reception will be powered by that old ESB line now, In the early days of the ESB coming to Donegal it was considered a luxury and people went from always saving energy and switching off that lights that no one was using, more to save money, long before it became a green issue. 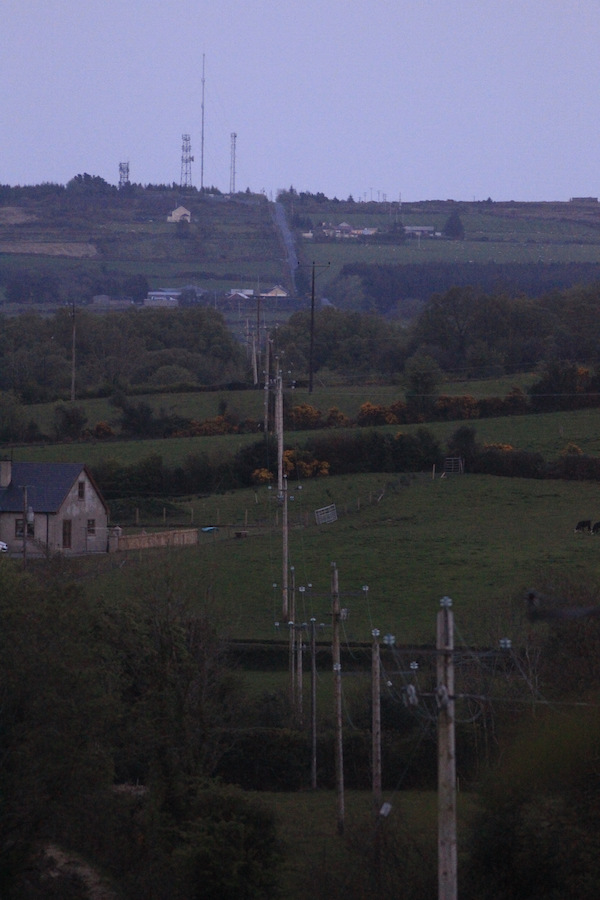 The old power line that my father plotted out in the 1960’s to take power to the Mongory RTE transmitter. Photo Brian McDaid.

Now electricity is on everyone’s mind again as they consider what the future mode of transport will be as diesel is looking to be phased out and hybrid option or full electric cars will be the norm possibly plugged into power supplied on the national grid and who knows its possible it might come through that old 38 line or the many more ways that electricity is produced in the future.

DD Motoring (and other things): A power change was last modified: May 13th, 2021 by Brian McDaid