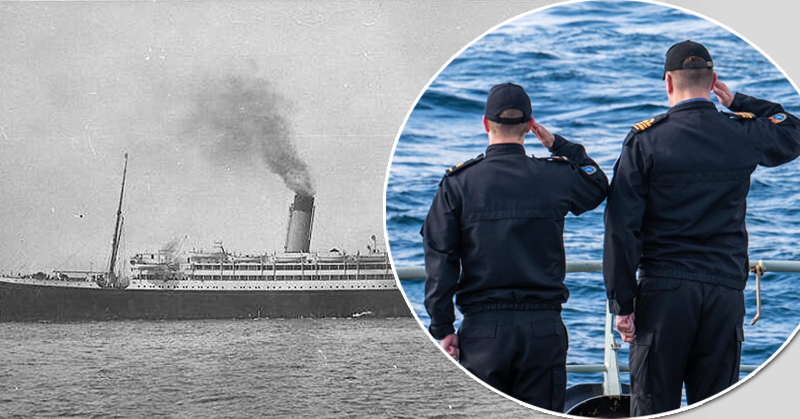 Two Canadian warships visited the Inishowen peninsula today to commemorate the sinking of the HMS Laurentic.

On the 25 January 1917, 354 men from the UK, Ireland, Canada, South Africa and Hong Kong lost their lives when the HMS Laurentic, an armed merchant cruiser converted from a passenger liner was sunk off the mouth of Lough Swilly after striking German mines.

Two Canadian warships, HMCS Kingston and HMCS Summerside, held a special at-sea wreath laying ceremony today at the wreck site of the Laurentic. They were joined by Lough Swilly RNLI and some locals from Buncrana. The short service acknowledged the loss of life in the tragedy and honoured the devotion, courage, and ultimately the sacrifice of those who took part in the Battle of the Atlantic.

“Even in these times of uncertainty today, it is important we continue to recognize and honour the sacrifice and service of these individuals and their families,” said a Facebook post from the Canadian Forces.

SS Laurentic was one of the most popular ships in the White Star-Dominion service from Liverpool to Montreal and Quebec before the war. She was built at Harland & Wolff’s yard in Belfast in 1908, and was the first passenger liner to be equipped with twin reciprocating engines and a low pressure turbine in the centre to drive the third propeller. The Laurentic was 550 feet 4 inches long and 41 feet 2 inches depth of hold, and had accommodation for 150 first class , 430 second class, and 650 third-class passengers.

While at Montréal, Canada on 13th September 1914, Laurentic was requisitioned by the Canadian Expeditionary Force for use as a troop transport. She sailed to Gaspé Bay where on 3rd October 1914 she set sail, under the command of Captain John Mathias, as part of huge convoy of 32 ships sailing from Canada to the United Kingdom with well over 30,000 Canadian soldiers sailing to Europe to serve the British Empire. HMS Laurentic arrived at Plymouth, United Kingdom on 14th October 1914.

Afterwards she became an armed merchant cruiser. It patrolled around Hong Kong and Singapore from February 1915 until August 1916.

With 3,211 gold ingots each weighing 40lb worth a total of £5 million (net worth in 1917) aboard and intended to pay for war supplies, under the command of Captain Norton, Laurentic left Liverpool, United Kingdom bound for Halifax, Canada on 23rd January 1917.

Two days later, on 25th January, HMS Laurentic left Lough Swilly. “The ship was not camouflaged in any way; her sides and upper works, being dazzling white, presented a beautiful sight steaming down the Lough.” Included on board was Rufus Austin Chief Armourer in the Royal Marines.

Around 5.55pm, 3 miles outside the mouth of Lough Swilly , off Malin Head, the Laurentic suddenly hit a German mine, striking her forward end of the port side, followed by hitting a second mine, striking the area of her engine room on the port side. With Laurentic sinking the survivors started to evacuate the ship in the lifeboats; as the power had failed, there was no light aboard the sinking ship. Laurentic sank within about an hour. The last person to leave the ship was the Captain.

Those in the lifeboats were not safe – it was a terrible freezing cold winter’s night. The rescue was slow with some being rescued in the morning; others as late as the afternoon. Of the 475 people aboard Laurentic only 121 survived the tragedy resulting from an act of war.

Most of the gold aboard was recovered by the Royal Navy between 1917 and 1924, during over 5,000 dives to the wreck. The last gold to be found at the wreck site was in the 1930’s. Despite some unsuccessful efforts since to recover more, it is believed that 22 bars of gold are still hidden somewhere at the wreck site of Laurentic today.

71 of dead were buried in one large grave in Fahan churchyard with an ecumenical service. The Admiralty afterwards erected a monument over the grave inscribed with the names of the officers and men interred there.

Of the 475 officers and ratings onboard, 354 lost their lives. Others are buried in the many graveyards around Lough Swilly and beyond.

All of the dead are commemorated on the Plymouth Naval Memorial in Devon, England.