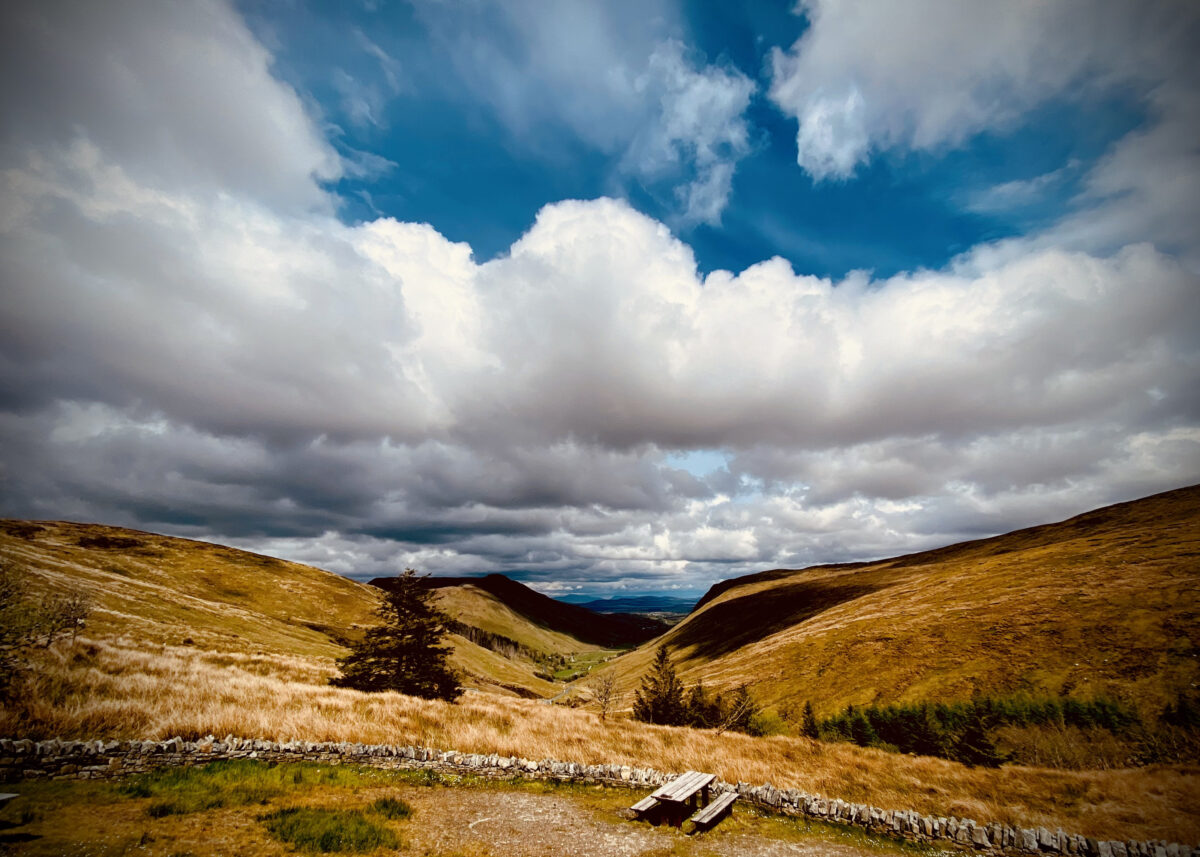 written by Brian McDaid May 20, 2021
Facebook0Tweet0LinkedIn0Print0

‘COME on, grandad’ two children call. They’re finally down from Dublin for the first time in a long time.

They’re down at the salmon’s leap in Teelin. Their grandfather and his father all grew up here in the family home down the road. We strike up a conversation about Johnny Moloney from my native town, Letterkenny.

‘He was a slater wasn’t he?’ I suggest. ‘Aye, and a good one at that – he was my uncle,’ the grandad proudly replied.

It wasn’t hard for two strangers to have a yarn. A year ago, we might never have struck up the conversation. We met at a pop up coffee shop, this one is in its third year now and this is my second or third time to call over there.

A friend of mine, Jules Healy and her partner Ken developed this beautiful meeting spot through their 1968 Citroen which started out in life as a bread van in France. The couple brought their Citroen HY bread van  from Toulon ‘in thru’ to Teelin and branded the coffee as Brewinthru,

Before the lockdown this combination of quietness, of this 50 year old van in mint green, the location along the road side at the salmons leap at Teelin and the relaxed personality of Jules who worked in Magees chemist for years and who enjoys the art of conversation so much so that she might have to ask you a second time what you ordered. 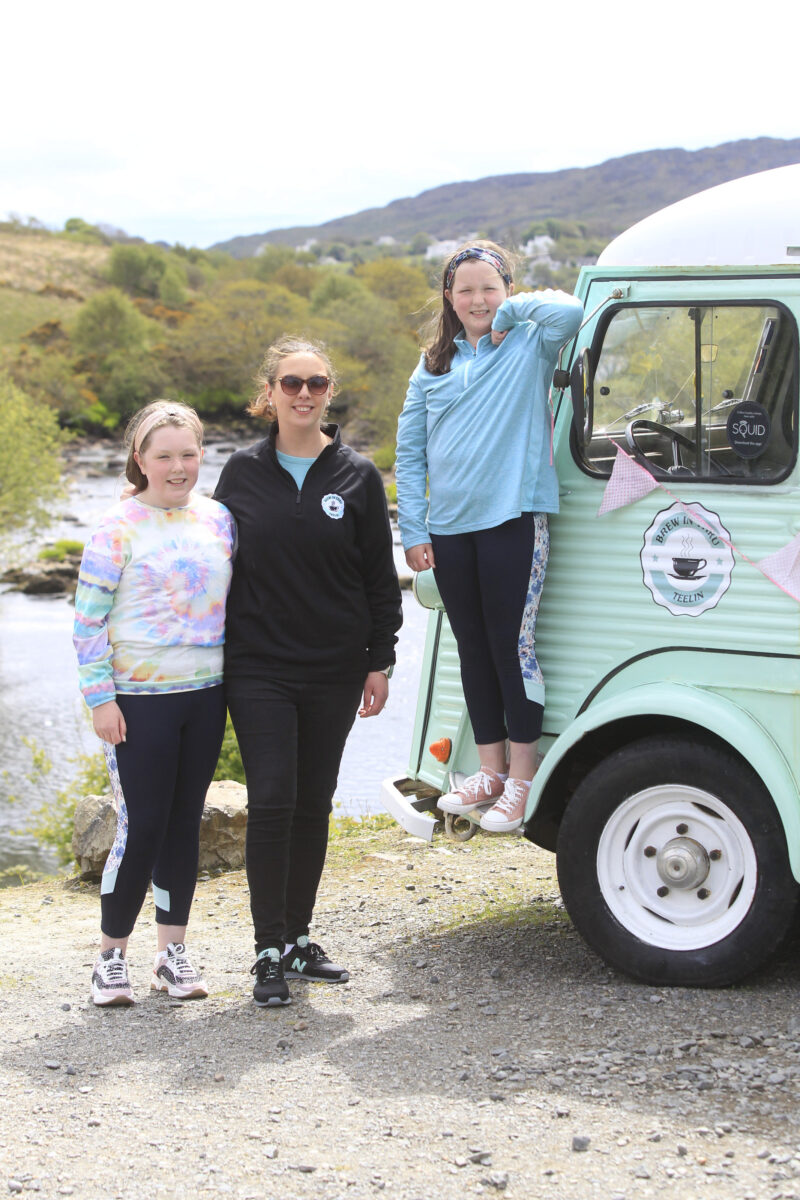 Grace and Elsie Gregg from Drunkeen helping out at their auntie Jules at Brewinthru in Teelin. Photo Brian McDaid

In lockdown this combination of a safe outdoor place to meet, to interact and just stay about the place and chill for an hour was magic  On the Saturday afternoon Jules’ two nieces have a wee Saturday job, down to give her a hand, dealing with the steady flow of callers.

Three generations of the Maloney family drove up from their home, the grandad and two grandsons made a beeline for the coffee shop to get a couple of minerals and straws before they made their way down along the riverbank just as the generation before them did.

This was just one of the locations I visited over the weekend taking full advantage of both the lifting of the restrictions and the good weather. 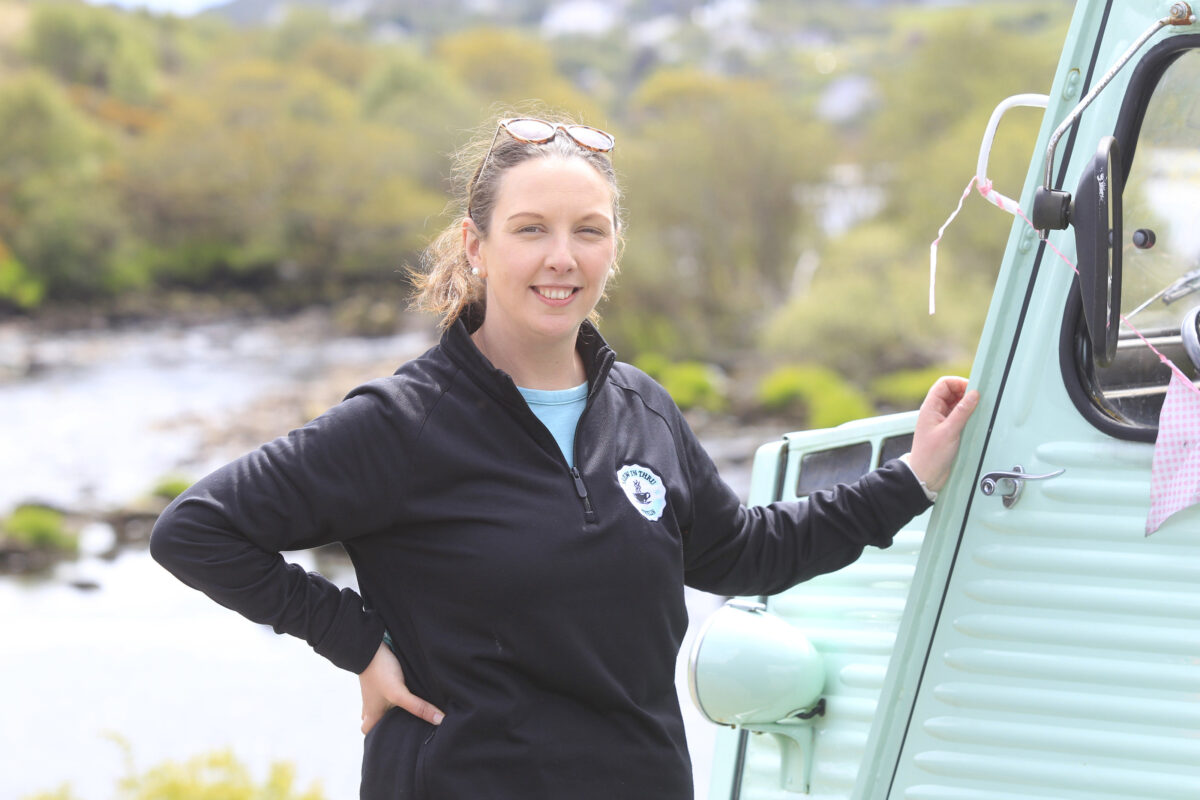 I felt like a real tourist complete with a car rented from Enterprise car hire, located in Letterkenny, on Monday morning they were able to tell me that I racked up nearly 700 kms from Friday evening to Monday morning in their 191 Dublin registered Opel Astra one litre  three cylinder petrol powered rental.

On Friday morning I had a hassle free handover in a matter of minutes and a discount of €20 because I pre-booked the car on line the night before.

Thankfully I did a better job of booking something online this time  compared to my last adventure where I booked 20 seats on an Easy Jet flight from Belfast to Edinburgh for just four people and spent nearly a day talking to someone in India trying to get them un-booked again.

My big’ unleaded’ sticker beside the petrol cap and my reminder on the inside of the windscreen to ‘drive on the left ‘ signalled to other road users that I was more than likely a tourist on my way round Donegal, and that suited me to the ground to blend in with all the traffic on the road – especially on Sunday in Co Donegal. 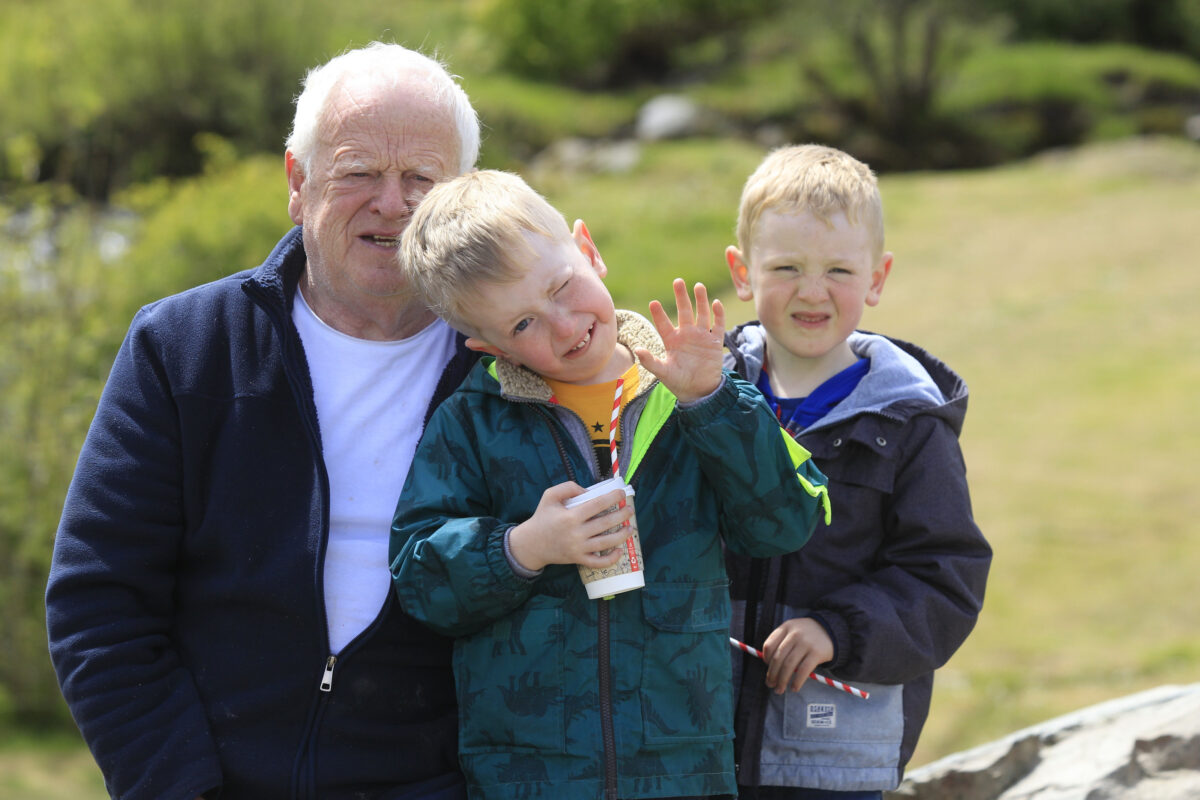 Paddy Malloney with his grandchildren Danny and Liam Maloney at the Salmons leap in Teelin Photo Brian McDaid.

For the first time Donegal registered cars outnumber everything else on the road on that sunny Sunday afternoon throughout Donegal.

It would remind you of the last weekend on the old school summer holidays when everyone got one last spin out before school opened.

This week it was the opening up from the lockdown again.

For once Donegal people were out and taking full advantage of the beautiful county that we live in.

Even if it was only to drive to the top of the Knockalla coast road or pull in at the car park at the top of Glengesh; get out, stand up in the wall get the selfie  and then say: ‘Jez that’s some view’ followed  20 seconds after by saying ‘its cold enough when your’re out’ before retreating back into the comfort of the car.

Are we nearly there?

Even at the age I am, straight after the Brownknowe School on the road after Ramelton where you can see the sea does the same thing for me today as it did as a child heading to Rathmullen on a summer Sunday heading to the beach.

Then driving along the coast road and watching the shore and watching The pier of Rathmullen come into sight.

There were a few hardy ones in the water but the majority are just milling about the beach, lining  up for a 99 or a coffee in my case. 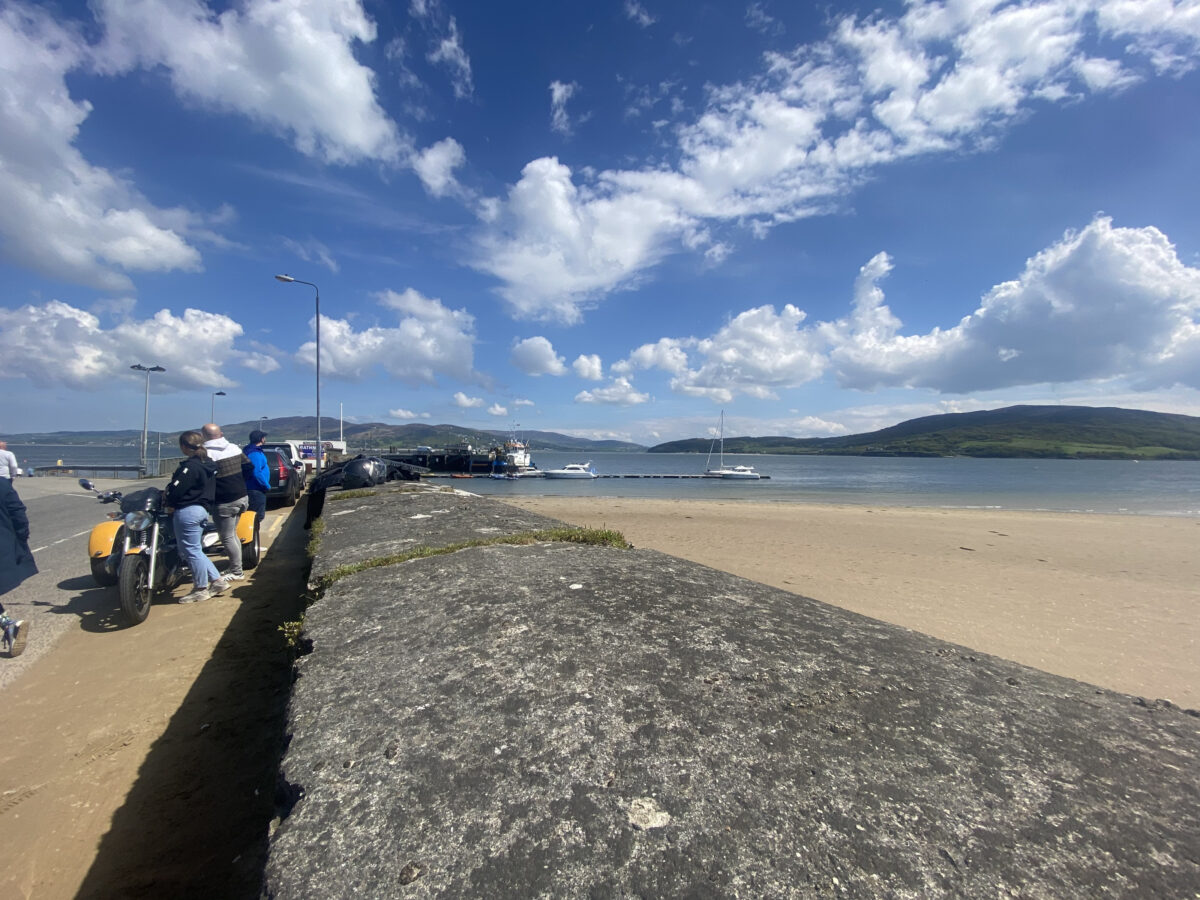 Enjoying a cuppa on the pier wall in Rathmellen and watching the day go by. Photo Brian McDaid.

I take my americano over to the old sea wall on the old pier and take in the sights.

It’s the first day this year that I saw the marina for the pleasure boats in place, inch island is only across the way but it looks so far off and peaceful. As I make my way back to my car I spot an older man sitting in the passenger’s seat. I’m guessing that it’s his daughter that’s driving. She has taken the nose of the car down to the edge of the car park so her father can see the sea.

They never get out of the car  just sit there for a while before they reverse back on to the road and head home, I imagine that this was like for many there favourite beach and they had memories when he would drive his family down here many years ago.

The day is young so I head over the coast road over Knockalla driving my rental car to look for a wee road that I have often thought about but never seemed to have the time to look for it. It was a junction up off the main coast road where I first marshalled in the rally.

I had nearly given up when I came on it at a cross road there was a house built at the junction now with a well trimmed Leylandii hedge so it only kinda looks like what it looked like in my memory.

There’s a beautiful name post on the corner with Inniskil written in Irish and English so now I have a name to put to the memory of a memory from the past.

My last stop off wasn’t a planned thing it just happen as It always does a wee call to Manus Kelly’s Remembrance Garden in Fanad, 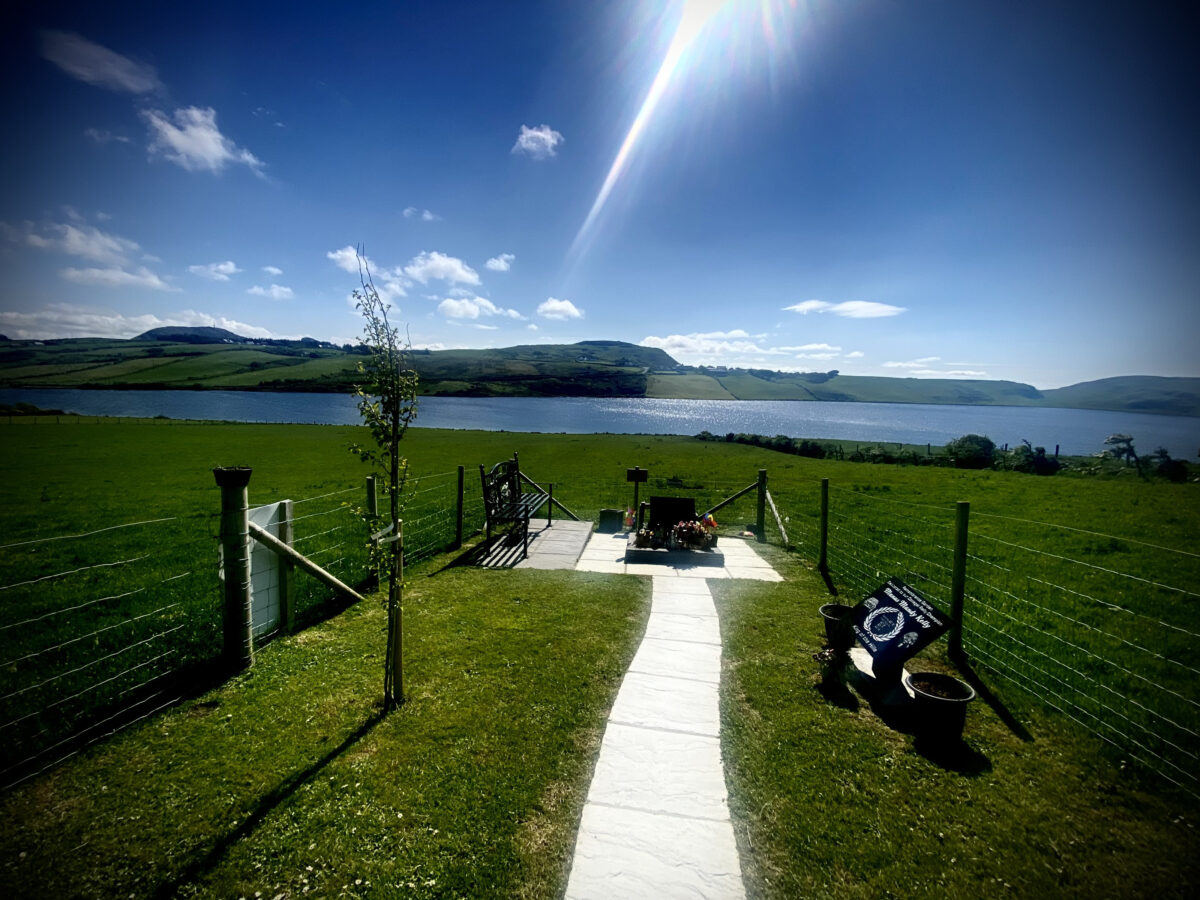 From the moment I opened the gate into the fenced off section of field the word respect runs through my mind firstly from the landowner who has understood what this place means to people that have found this spot on their journey to spend a few minutes of their time there to look down into the lake or to look up to the sky, which is ever changing then to think of family and friends who carry lawnmowers down to Fanad to cut the grass around the pathway into the field which will always give me a lift when you share a few memories in your mind.

As I headed away and around the lake and prepare to look for the point where I can look across and see the garden on the hill side, I met too oncoming cars on the narrow road, pulling in to let them through only to realise that it is two car loads which contain three generations of Manus Kelly’s family on their way to visit the garden.

I’m very happy to meet them down here but I’m lost for words when I try to speak to one of Manus’ brothers in the van and then to Manus’ mother and father and two sons in the next car all there to help each other.

Heading high into the sky I cross the Harry Blaney bridge from Fanad across to Carrigart on on into Downings was blessed to be the last customer to get a bite to eat at McNutts cafe before they closed on Sunday evening.

I sat on the seat that my children sat in when they were wanes when they had a mobile in Downings and enjoyed the views that were familiar to us as a family when they were growing up.

Scrolling through the photos I had taken over the weekend on my photo album that weekend there was one that stood out.

It was one that was sent through WhatsApp on Sunday afternoon it was of a hand drawn diagram showing measurements of a project that I was working on, the photo was sent to me at 4.02pm  but I didn’t know I received it because my phone was on silent.

Iit was only when I opened it and the photo date and time placed it in the timeline on my photo album that I realised that this photo was sent to me when I was in Manus’s remembrance garden, sent to me from Manus’ godmother and a great friend of mine.

I can hear Manus chipping in: ‘Hey sir you towl that story back to front you should have put this at the top, sir. Not down here at the bottom, you’ll get that we job sorted sir. Good man.’

I always think of Jim McGuinness who would tell his team that there was no such thing as perfect, you never know what you’re going to meet and last Sunday was this case.

It was serendipity that linked up time memories and people but you need to be open to it we move on by getting a wee lift from the past, sometimes like on Sunday it just made a perfect weekend driving around Donegal.