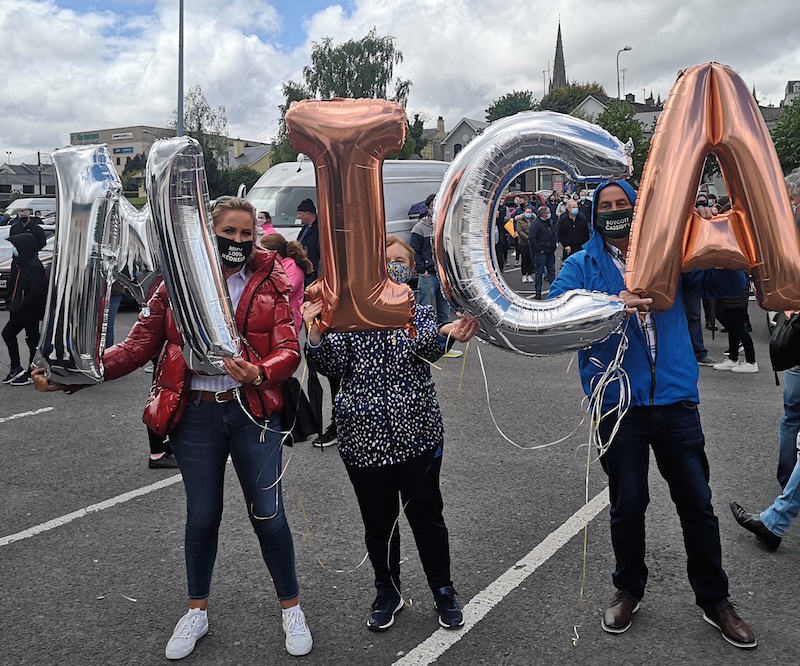 Huge turn-out for MICA protests in Buncrana and Letterkenny

written by Staff Writer May 22, 2021
FacebookTweetLinkedInPrint

More than 10,000 people have marched across towns in Co Donegal to demand 100% backing from the Government for their crumbling homes.

Thousands of families have been affected by the MICA scandal which has seen houses literally crumble because of faulty building blocks.

A State scheme set up to help those families hit by the scandal has been slammed as costly and not effective enough.

Almost 10,000 people gathered in the Inishowen town of Buncrana while a further 1,500 gathered in Letterkenny to voice their anger.

The cost for many to join the Redress Scheme and to have various reports done on their homes is more than €5,000, which the protests heard many simply do not have. 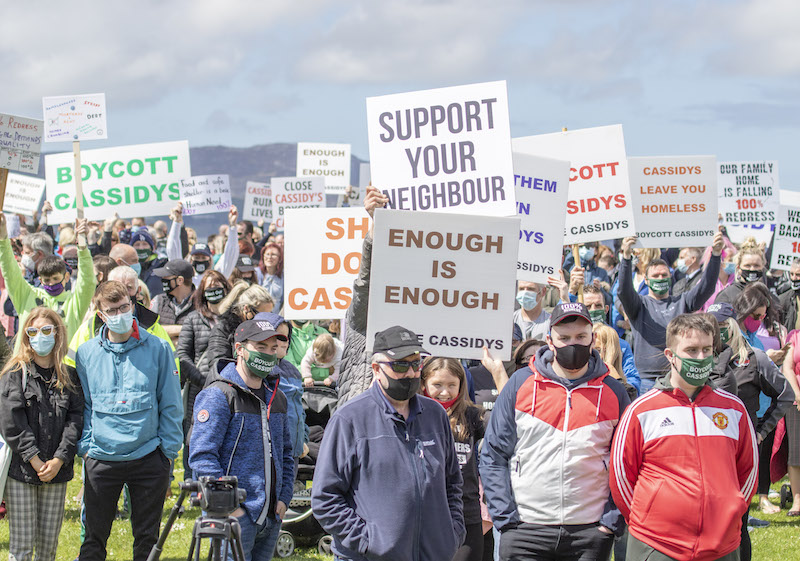 Some of the large crowd at the MICA support protest in Buncrana. (NW Newspix)

Many of those who gathered wore Covid facemasks with the message ‘MICA 100% Redress.’

The core message of those gathered at both rallies was the demand for 100% financial backing from Government to fix or replace their crumbling homes.

In Letterkenny, hundreds marched from the local community centre to the office of Donegal County Council to express their anger.

Brian Margey, who addressed the Letterkenny rally, said he was initially embarrassed when he found his home was riddled with MICA.

“I am no longer embarrassed as I realise MICA has ruined the lives of so many people. We want one hundred per cent redress from the Government because of this scandal.

“We have rights as citizens to live in a home that is not crumbling down around us and the Government needs to support us all the way,” he said.

Cancer survivor Mary O’Regan told how she moved to Donegal 13 years ago to be close to her family but at 70 years of age has found her house falling down around her.

She fumed “No financial institution would entertain us OAPs for the amount we would need to fix our homes.

“It is imperative that we getting nothing less than one hundred per cent redress for everyone. Money has been found for past and present Government when needed. 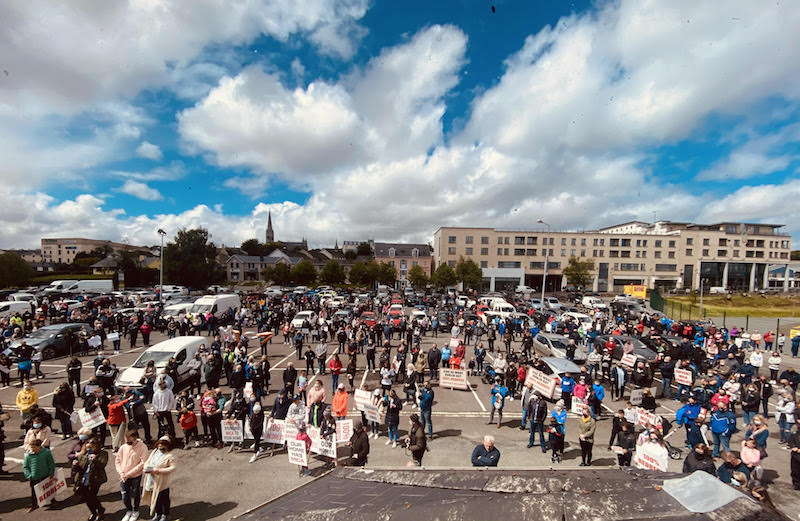 Some of the large crowd in Letterkenny. Pic by Brian McDaid.

“There is no excuse the money can’t be found for us, the MICA victims unless they are saying that Donegal doesn’t matter.”

She appealed to all pensioners hit by MICA to join the campaign to save their homes or have them rebuilt.

Many local county councillors as well as Sinn Fein TD Padraig Mac Lochlainn also turned up at the rallies to show their support to those hit by MICA.

In Buncrana, the man who has sparked the latest protests said he will fight for as long as it takes to get justice for the hundreds of families across Donegal and further afield hit by MICA. 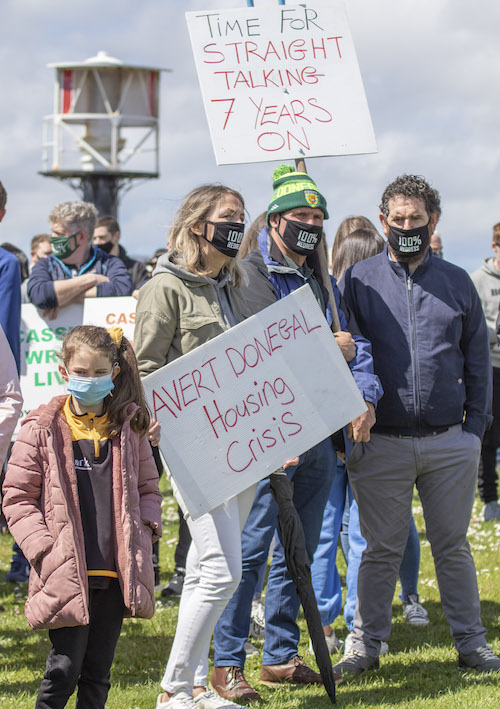 Some of the large crowd at the MICA support protest in Buncrana. (NW Newspix)

And Paddy Diver warned “We can see by the crowds we have here and the anger there is against the Government that people want justice and are determined to do whatever it takes to get it.

“If they think we are going away they are wrong. This is just the first protest. We will block the M50 in Dublin if we have to and they will listen to us then.”

Thousands of people walked from the Shore Front in Buncrana, up through the town’s Main Street and to the quarry of the company many claim is responsible for supplying faulty blocks. 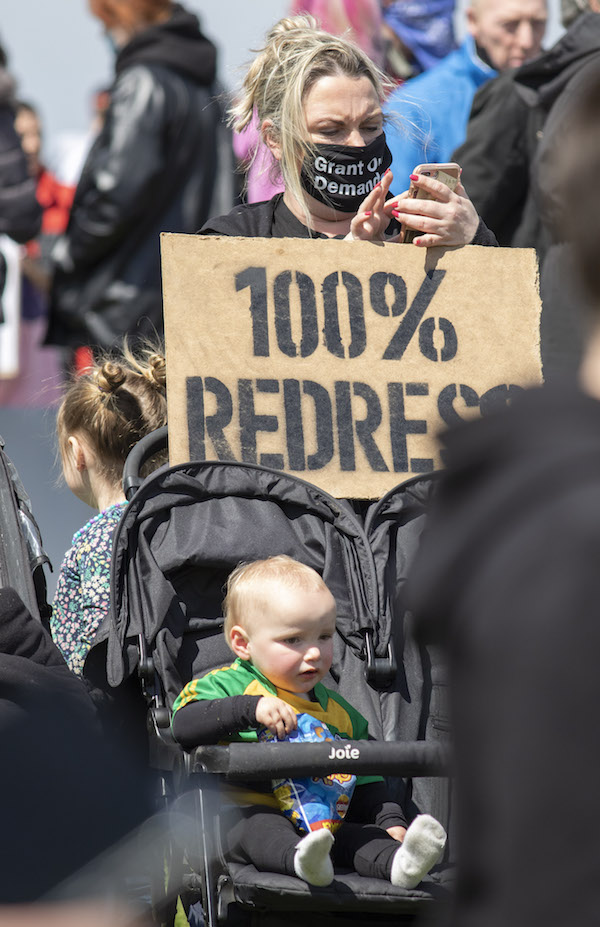 Little Molly Burke and her mum Noeleen at the MICA protest in Buncrana. (NW Newspix)

Huge turn-out for MICA protests in Buncrana and Letterkenny was last modified: May 25th, 2021 by Staff Writer
FacebookTweetLinkedInPrint