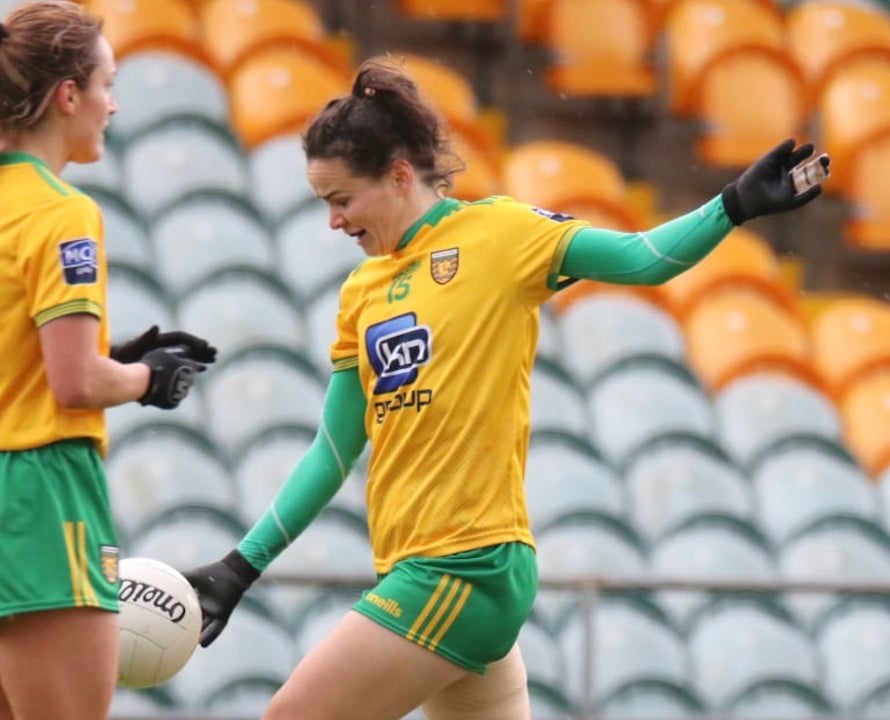 Donegal ladies surge away from Westmeath in second half

written by Chris McNulty May 23, 2021
FacebookTweetLinkedInPrint

The Moville woman netted in the first minute and again in added time to give Maxi Curran’s charges the victory.

Donegal mightn’t have been in top gear, but it was nevertheless a useful opening afternoon at the office.

Donegal were 1-5 to 0-5 in front at half-time when a hail shower borrowed from the winter months began to drive down.

In the biting chill that swept across the stage, it was hard to remember that these are weeks when, ordinarily, the Championship would be upon these players. 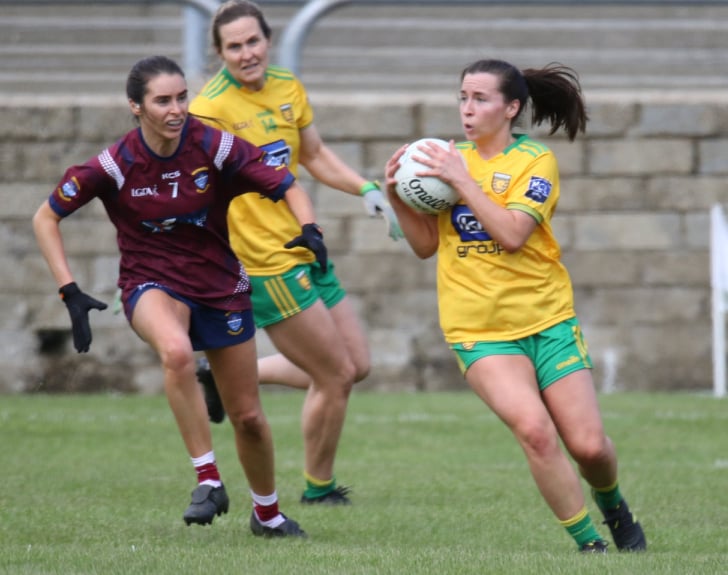 Katy Herron and Niamh Hegarty stretched the Donegal lead early in the second half, but they had a big let off when Sarah Dillon, played in by Lorraine Duncan, shot over the bar with only Aoife McColgan to beat in the 36th minute.

Last year, before the onset of the Covid-19 pandemic saw the 2020 League to be declared null and void, Westmeath scored a 1-11 to 1-7 win over Donegal in Mullingar.

Donegal have lost some of their experienced names for 2021 with Yvonne Bonner, Eilish Ward, Ciara Hegarty and Deirdre Foley among those not back in the fold, but there was a debut for Shelly Twohig. The new recruit from Cork showed some tidy moments that suggest she will be a useful addition. 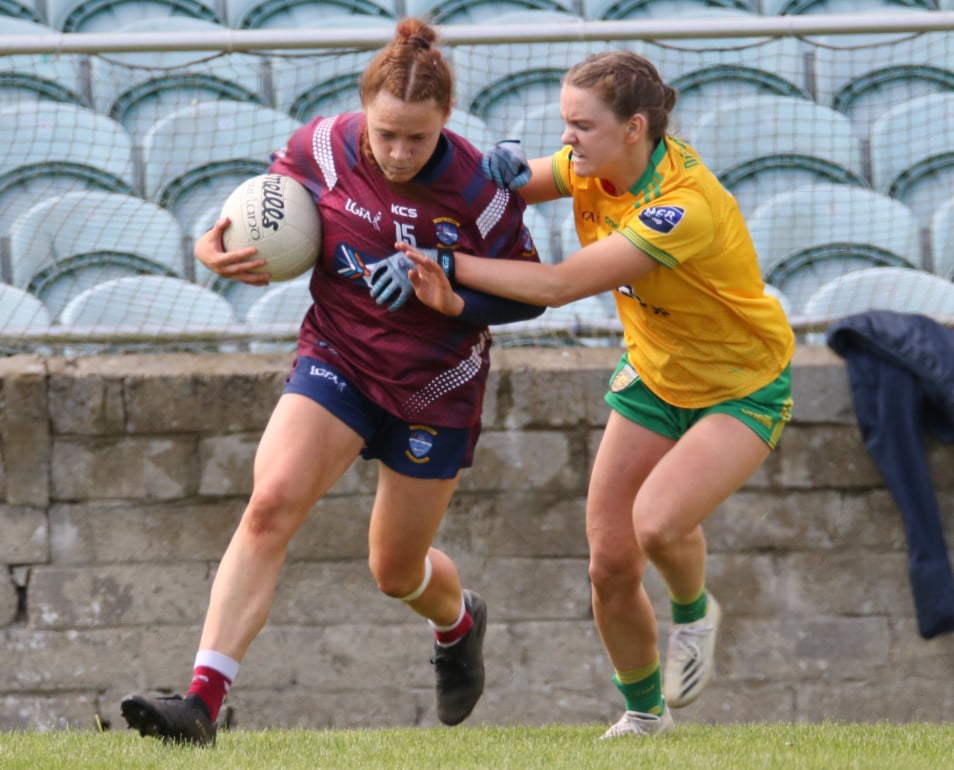 Duncan hit the crossbar as Westmeath issued another reminder of their danger, but two Karen Guthrie frees had Donegal’s lead at double scores, 1-11 to 0-7.

Ten minutes from the end, Geraldine McLaughlin – making her 100th Donegal appearance – had to be withdrawn injured.

However, Niamh McLaughlin, set away by Niamh Hegarty, surged away to plant a second goal past Sinead Byrne in the dying minutes.

Leona Archibold converted a late penalty for Westmeath, but it was all rather academic by that stage with Donegal having hit 1-6 in a row.

Late in the first half, with Donegal a point in front, the Termon ace shot against the post after winning a ball that seemed firmly against her.

McLaughlin played on after a knock that forced her off in the early minutes, but a heavy belt with the winning post in sight drew a close to her participation.

After Michael Murphy’s withdrawal last night for the Donegal senior men’s team, there was a worry that McLaughlin would also be bound for the treatment table, but her return settled the home nerves.

Donegal had a dream start with the ball in the net after only 16 seconds. Katy Herron found Niamh McLaughlin and the newly-appointed captain’s intended pass for Geraldine McLaughlin went past its target and goalkeeper Byrne for the opening goal.

The collision wit Byrne forced the Tir Chonaill sharp-shooter off for a short spell, but upon her return she tapped over a free after a delightful point by Sarah Dillon got Westmeath off the board.

Herron landed a fine effort with Donegal patient, but Anna Jones made it a case of third time lucky, landing a free from 30 metres after spurning two earlier attempts. 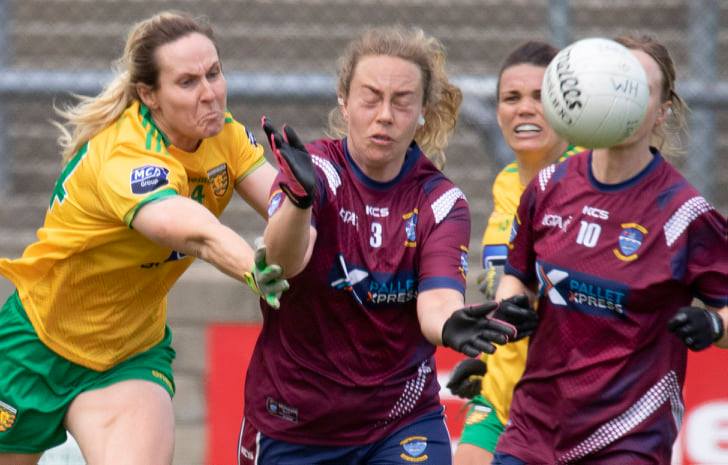 Jones drew Westmeath level, clipping over from the ground in the 23rd minute, but a brace from the experienced Guthrie restored the cushion.

Niamh McLaughlin opened a three-point lead and, with the final play of the half, Aoife McColgan, the Donegal goalkeeper, saved from Jones.

The game never really sparked to much life, but when substitute Suzanne White stroked over a late double it was game, set and match for Donegal, although there was still time for the sides to swap goals.

Donegal ladies surge away from Westmeath in second half was last modified: May 23rd, 2021 by Chris McNulty
FacebookTweetLinkedInPrint