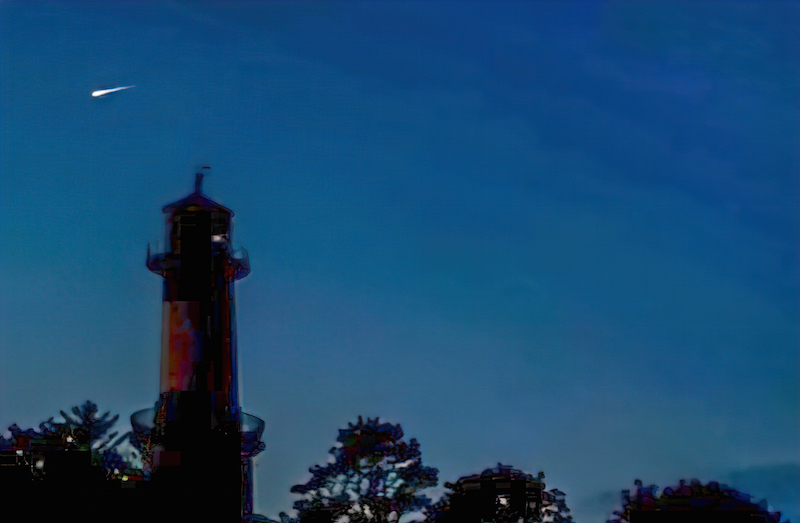 So where did the Donegal meteorite land?

So where is the meteorite which roared across the Donegal skyline on Wednesday night?

Most likely it is about one hundred miles off the north Donegal coastline, according to David Moore of Astronomy Ireland.

David estimates that due to the brightness of the meteorite and the various reports the pace rock would have been the size of a microwave oven or slightly bigger.

Hundreds of people caught a glimpse of the meteorite as it was pulled into the earth’s gravity and soared across the skyline just before 11pm on Wednesday.

Eileen McLaughlin caught amazing footage of the meteorite as it passed above Shrove Lighthouse on the Inishowen peninsula.

David Moore of Astronomy Ireland said such incidents are more common than we think and that there was even a similar meteorite two weeks ago.

“The difference between Wednesday night and other nights is that a lot of people were already outside looking at the Super Moon when they caught a glimpse of the meteorite.

“I know we received a lot of reports from Donegal but it could be seen from across the country,” he said.

David says the spacerock was probably orbiting around the sun for millions of years before it eventually came crashing to earth after being pulled into the earth’s gravity.

“I would estimate that it probably broke up and ended up one hundred miles out to sea off Donegal.

“It appears a lot nearer when you see it overhead but it is traveling at such speed that it is difficult to calculate,” he said.

So where did the Donegal meteorite land? was last modified: May 28th, 2021 by Staff Writer
Facebook0Tweet0LinkedIn0Print0