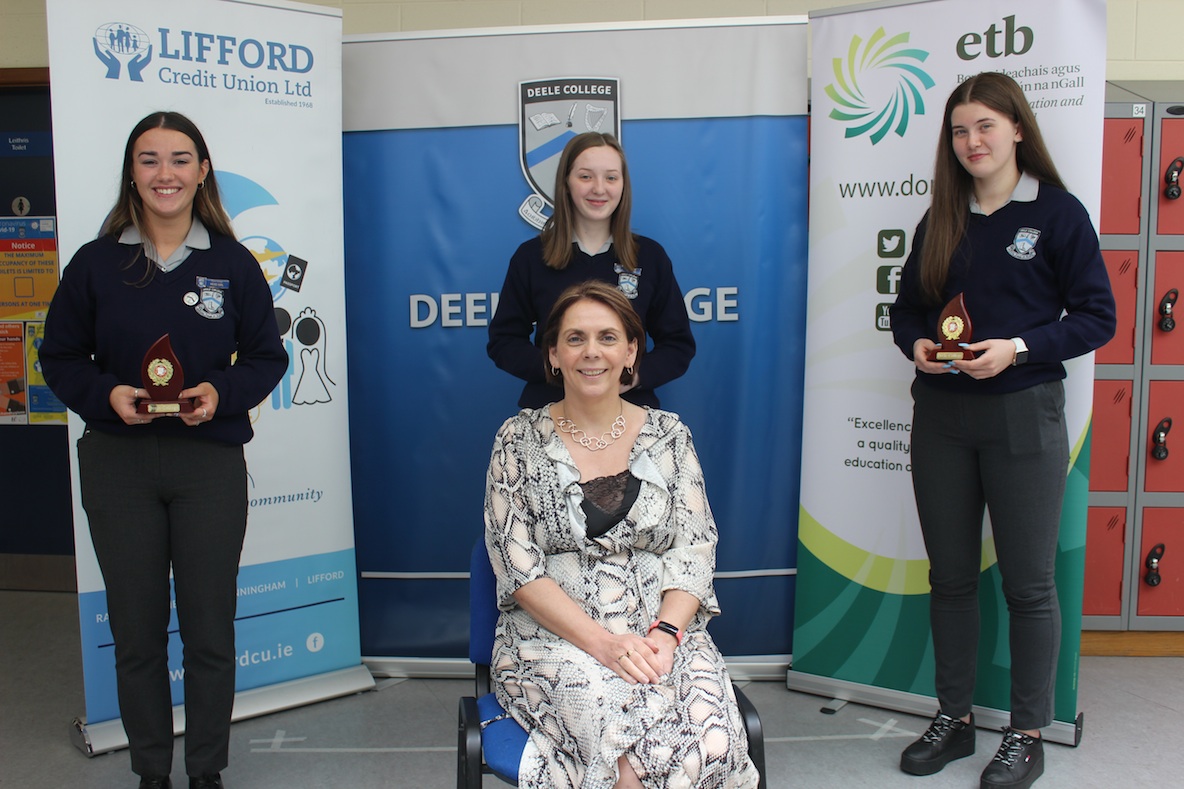 written by Cronan Scanlon May 29, 2021
Facebook0Tweet0LinkedIn0Print0

Deele College in Raphoe had its annual prize giving ceremony on Friday afternoon, but it was quite different from previous years due to covid restrictions.

Despite this, the school put together an excellent event, which was broadcast online to students throughout the school.

It has been a tough year for students adapting to online learning and being away from their friends and classmates for such a prolonged period. But, they have managed to not just persevere, but to flourish as was highlighted with some of the awards.

The ceremony was once again presented by Guidance Counsellor, Miss Gearoidin Brady, and despite the unusual circumstances, she gave her usual polished performance, keeping students entertained throughout.

The students were shown a montage of motivational videos from former students such as Brett McGinty and Tyler Toland, who have excelled in boxing and football respectively since leaving the school. Former students, Johnny Dunleavey from Finn Harps and Liam Porter, also offered some sage advice to the class of 2021, while Michael Murphy and Declan Bonner gave words of encouragement to all members of the school community.

It was a day tinged with sadness, however, as the inaugural Mick Hogan Award for Student Voice was presented to Chelsea Dowds in recognition for her work on the Student Council. This award is in memory of former teacher, Mick Hogan, who died in March of this year and was a much loved former member of staff who did so much for the Deele College Community. Mick was a key figure in establishing the Student Council and encouraging students to use their voice, so it’s an appropriate award in memory of a man who gave so much to the school.

The McGivern Cup, sponsored by the late Brian McGivern and his wife Maureen, has been a popular award in recent years and Mr McGivern’s contribution to the school was acknowledged following his untimely death earlier this month. This award for excellence in Home Economics was presented to Caoimhe Park and Abigail Mayne.

School principal, Mr Joe Boyle, said that despite 2021 being a difficult year, the students have shown their resilience and adaptability to continue their studies despite the upheaval around them.

“I think it’s really important to acknowledge the hard work and dedication of our student community who have faced a global epidemic and stuck to their task of engaging and learning throughout the year,” he said.

“The students have been a credit to themselves and their families and I think they should be highly commended for their attitude towards work over the past nine months.”

Mr Boyle also acknowledged the commitment and dedication of the staff members,the teachers, the SNAs, the office staff and the ancillary staff who have all put the shoulder to the wheel in order for the school to function in the midst of the covid crisis.

“Our way of working may have changed but our commitment to our students has remained the same,” he added.

“I would like to pay particular thanks to Miss Brady, who, as usual, presented the ceremony with all the professionalism that we have grown to expect and to Miss Mary Gibbons, for once again organising and planning our award ceremony that is a cornerstone of life here at Deele College. It is a massive undertaking in normal circumstances and this year has been far from normal, yet it ran as smoothly as it always does and I want to thank her for all her hard work.”

Deputy Principal, Miss Carmel Mulligan echoed the sentiments of Mr Boyle and said that it was important that students use their summer holidays to relax after a tough year.

“I’d like to congratulate all the award winners here today, they’ve represented the school with distinction throughout the year. I hope that they now enjoy their summer holidays and get a chance to relax during their time off,” she said.

“I’d also like to wish our Leaving Certs all the best as they approach their final set of exams and begin a new chapter in their lives either at college, apprenticeships or in the world of work.”

More pictures to be published later.

Damien McDevitt Award for Prefect of the Year: Chelsea Dowds