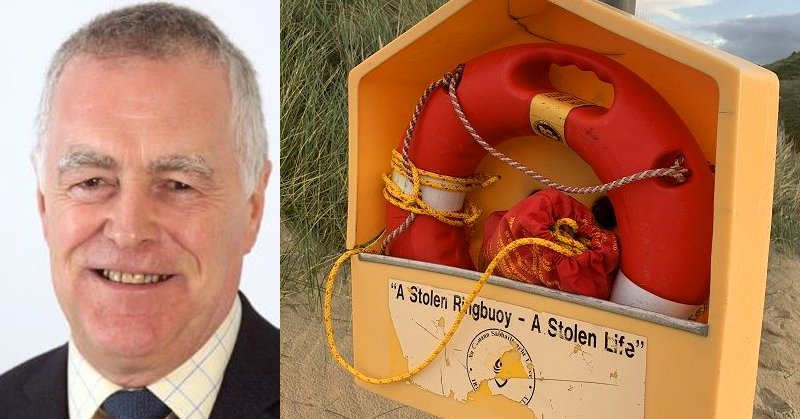 Donegal County Councillor Jimmy Kavanagh has called for smart technology to be used to monitor any potential theft of life buoy rings in Donegal.

Technology solutions, Cllr Kavanagh said, would immediately alert Donegal County Council to any life rings that are removed and they can act immediately to replace them.

Cllr Kavanagh said: “I have had reports from members of the public about life rings being removed from their locations, this is an issue not just in Donegal but all over the country, even though it is quite unbelievable that anyone would do such a thing, some counties are reporting that up to 40% of their life rings are being stolen or removed from their locations, I had a successful motion agreed a number of years ago to locate a ringbuoy at the Oldtown bridge in Letterkenny and it’s sad that it has since had to be replaced at least twice.

“Removing a ringbuoy could cost a life, and it is timely, as we enter the busiest Summer months, to remind people of how important it is not to interfere with this life saving equipment.

“At present the council depend on their own inspections or reports from members of the public to alert them to missing life rings. I am asking that the council investigate using technology so that rings that are removed from their location are reported immediately to the relevant staff, so that the ring can be replaced as soon as possible, as the slogan goes “ a stolen ringbuoy, can result in a stolen life.

Cllr Kavanagh continued: “I welcome the answer from the council that they are currently part of a pilot process to trial technological systems to support ease of ringbuoy location along with Dublin City, Rathdown/Dun Laoghaire and South Dublin councils. Such a system might not only safe lives but could also prove to be economical in the long term if it can assist with retrieving missing ringbuoys, and I hope we can have a workable system in place as soon as possible. In the meantime if you know of a missing ringbuoy you can report it to Donegal County Council or log it online at www.ringbuoys.ie”