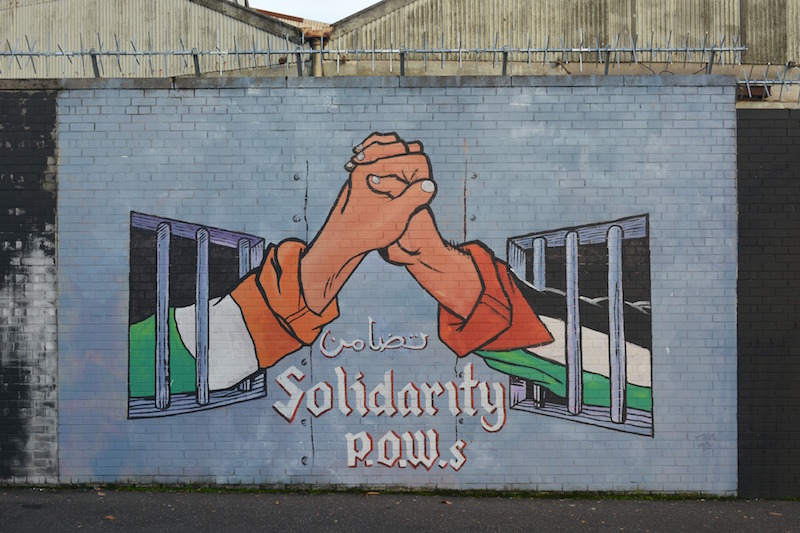 Why do the Irish feel so strongly about Palestine?

The Palestinian flag is a common sight in Ireland, from murals in the North to politicians’ masks in the Dáil.

Support for the Palestinian cause has been a long-standing tradition of Irish nationalists, in particular, due to the parallels drawn between both nations’ histories.

For many Irish people, the collective memory of our own colonisation lends itself to a deep affinity with other oppressed groups.

In the early 1900s, this affinity lay with Zionists. Irish nationalists sympathised with the notion of statelessness, dispersion, living in diaspora, and religious persecution.

Historian Dr Aidan Beatty notes that during Michael Davitt’s time as a journalist, the Land League founder used the term ‘penal laws’ to describe the Russian Empire’s treatment of Jews, and compared Tsarist police to the Royal Irish Constabulary.

In the 1930s, some Zionists became increasingly interested in Irish nationalism and particularly, Ireland as a case study of how a small country could expel the British, Beatty added.

“The real dividing point became partition,” said Rory Miller, Professor of Government at Georgetown University. “It became very difficult for the Irish elite and political leadership to endorse Zionism openly because their whole worldview was very much influenced by opposition to partition and distrust of British motives.”

Éamon de Valera, in particular, opposed the idea of partition on the international stage.

The influence of the Catholic Church is another key consideration to note, Miller said, as in 1948 the Vatican called for Jerusalem and its outskirts to have “international character”. The government supported the Vatican’s view, with minister for external affairs Seán MacBride telling the Dáil that the whole area of Jerusalem “should be placed under international control.”

After the Six-Day War, Frank Aiken, Ireland’s minister for external affairs for much of the 1950s and 60s, used his platform at the UN to bring key issues of the conflict into public discourse,  including the plight of Palestinian refugees.
From the mid-seventies, Ireland became a leading proponent of Palestinian rights in
the EU, Miller said.

The motion was tabled by Sinn Féin TD John Brady and was passed once an amendment was made that also condemned the actions of Hamas. People Before Profit’s proposed amendment calling for the expulsion of the Israeli ambassador and the introduction of sanctions on Israel was defeated by 87 votes to 46.

However vocal Ireland is, the government must be mindful of its EU membership. The Occupied Territories Bill, which would make it an offence to import goods or services originating in an occupied territory, has not yet passed as the government said it would breach EU law.

In the North, the Palestinian flag being flown in republican and nationalist communities is based on an anti-imperial, anti-colonial framework. Consequently in some loyalist and unionist communities, the Israeli flag is flown. This oppositional form of politics has been referred to as a proxy conflict by some.

This can be illustrated with a walk down Northumberland St in Belfast, which connects Shankill Road and Falls Road. A mural of Lt. Col. Patterson, who former Israeli Prime Minister Netanyahu referred to as the “godfather of the Israeli army”, is just a few minutes walk from a poster of Leila Khaled of the Popular Front of the Liberation of Palestine.

Today, the prevailing theme in the discourse surrounding the pro-Palestinian cause is the notion of a shared history.

Brian Ó Éigeartaigh of the Ireland-Palestine Solidarity Campaign said “there’s a definite historical resonance” between the Irish and Palestinians.

“What happened to us is happening to the Palestinians now,” Ó Éigeartaigh said, “our country also endured colonisation, our people have been dehumanised and criminalised.”
Ireland has a history of both standing with and being inspired by other oppressed groups. The Northern Ireland Civil Rights Association (NICRA), which was established in 1967, drew much of its inspiration from the US civil rights movement.
  
 During the apartheid era in South Africa, Ireland banned the importation of South African goods. Apartheid is a crime against humanity that Israel has been accused of in a 2021 report from Human Rights Watch.

“It’s the South Africa apartheid moment of our time. It’s the cause of anti-colonial struggle, it’s a cause of liberation, it’s a cause of dignity and human rights,” Dr. Brendan Ciarán Browne, Assistant Professor of Conflict Resolution at Trinity College Dublin said.

Since first visiting Palestine in 2009, Browne has spent much of his career living and working in Bethlehem and Sheikh Jarrah.

Browne said: “Ireland occupies a unique position on the UN Security Council and has a role to play when it comes to punching above its weight on the international stage when standing up for issues of injustice.

“Standing up in the Dáil and making a statement is one thing, but we have to put our money where our mouth is.”

Dr Jilan Wahba Abdalmajid, Ambassador of the State of Palestine to Ireland, who is from Gaza, said there are a lot of similarities between Irish and Palestinian people, namely a strong connection to their cultures and histories.

There is a small community of Palestinians in Ireland of between 700 and 800 people.

The Ambassador noted that the British colonisation of Ireland has extended for hundreds of years – “I think Irish people still have that oppression in their minds – how their people suffered during those years,” she commented.

She added: “Some of my friends even call Ireland the ‘Arab State of Ireland’ because they see how the support of the Irish for Palestine can sometimes be stronger than other Arab countries.”

There is support for Israel on the island of Ireland, too.

Executive Director of the Ireland-Israel Alliance Jackie Goodall said she hopes to see Ireland play a practical role in reigniting a viable peace process instead of bringing in sanctions.

Speaking of the Sinn Féin motion, Goodall said: “We do, unfortunately, have a reputation here for being the most hostile country in Europe towards Israel, and after what happened [in May] in the houses of our parliament that is further concreted.”

Steven Jaffe, co-chair of NI Friends of Israel, said that Irish opinion on the Middle East is “very sharply divided.”

Jaffe set up the group in 2009 after a stall selling Israeli goods was attacked in Belfast. Their aim is to engage people of all backgrounds and denominations to foster friendship and understanding.

“It concerns me that often it appears almost like a football match that people are taking sides and one of the things that we do as a group is to try and deepen people’s understanding.”

Although both the Troubles and the Gaza-Israel conflicts are very different, Northern Ireland’s learnings from the peace process is something we should export, he added.

Why do the Irish feel so strongly about Palestine? was last modified: August 23rd, 2021 by Elaine McCallig
Facebook0Tweet0LinkedIn0Print0