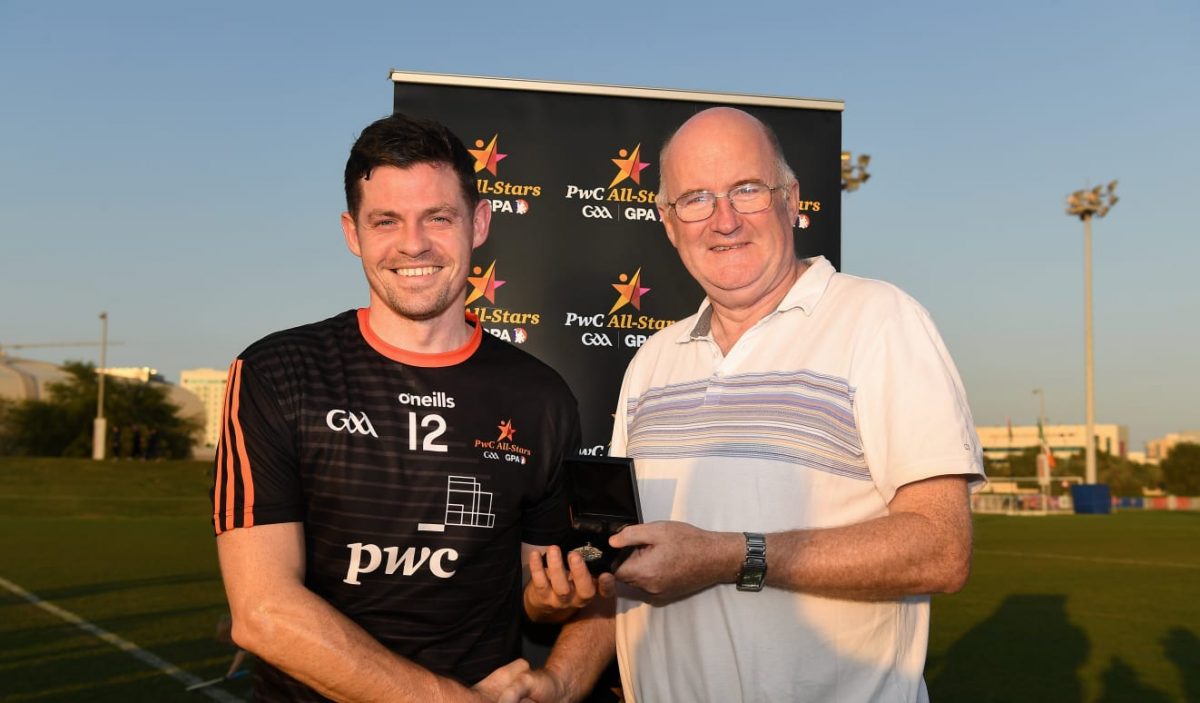 Donegal were denied the chance of victory in injury time when Referee James Clarke decided that a foul on Richie Ryan by goalkeeper Oisín O Doherty was outside the large parallelogram when it clearly was not.

The fact that he consulted with both his umpires before sticking with his decision only succeeded in compounding his error and left the Donegal camp understandably very annoyed.

The opening period set the tone for this cracking game, Derry under pressure after two defeats and Donegal secure for Division 2B for another season.

Fourteen points were evenly shared in the first 17 minutes. Cormac O’Doherty with four led the way for Derry while Declan Coulter ,  Ciaran Mathewson and Richie Ryan with two apiece kept Donegal in touch. One of Ryan’s was a goal chance and just after that Conor O Grady burst through only to shoot narrowly wide.

Two minutes later Derry’s Se McGuigan made no mistake as he raced in to slam home the game’s first goal, 1-07 to 0-07 to the home team.

The scores came at pace after the water break, O Doherty added two for Derry , Danny Cullen replied , but Brian Cassidy and Ordhan McKeever added points either side of another Se McGuigan goal and suddenly it was a nine point gap 2-11 to 0-08.

O Doherty and Coulter shared four points between them and then, just before half-time, Richie Ryan’s goal bound shot was blocked but Ronan McDermott followed up to force it over the line , 2-13 to 1-11 at the break and Donegal back in the game.

Two minutes into the second-half it was down to a one  point game , Ronan McDermott pointed and then Ciaran Mathewson produced a piece of brilliance to race past several defenders before blasting past keeper Oisín O Doherty.      Mc Guigan and McDermott exchanged points , O Doherty added his 9th and then midfielder John Mullan charged forward to blast the ball past Luke White , 3-15 to 2-13 and Derry in control again it seemed.

But not for long as Gerry Gilmore produced a brilliant goal, racing in from close to the sideline and beating the Derry keeper from a narrow angle, 3-15 to 3-13.

O Doherty converted a free to edge Derry ahead , then came Referee James Clarke’s meltdown moment , providing the perfect example of when a penalty is in fact not a penalty but only a free , which Declan Coulter knocked over for his 10th point of the game.

Cormac O’Doherty won it for Derry with a super long range free from his own 65 and near the sideline , a vital win for Derry and Donegal left feeling a little hard done by but still with plenty of positives to bring into the defence of their Nicky Rackard Cup title in a few weeks time.