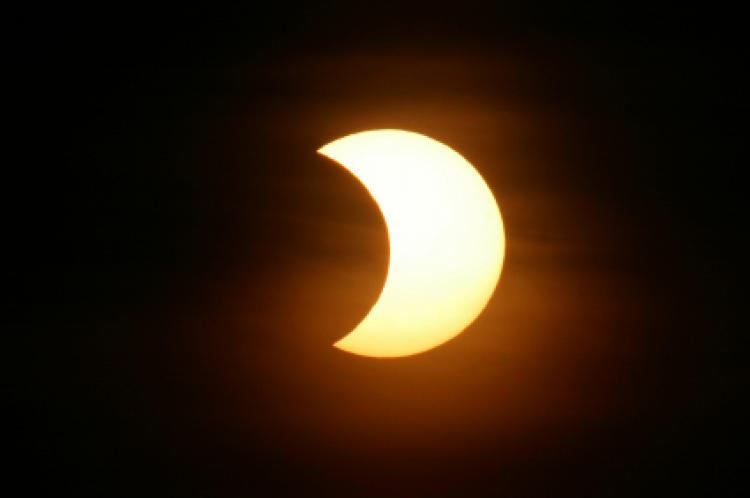 Donegal to get amazing view of eclipse of sun

People across Donegal will have the best chance of seeing an amazing partial eclipse of the sun tomorrow morning.

What could be a fantastic sight will see almost half of the sun will be covered by the moon.

The spectacular event is due to take place between 10am and 12.30pm tomorrow and will be the deepest partial eclipse of the sun since March 20th, 2015.

Mr Moore said there will not be a comparable partial eclipse until March 29th, 2025.

“Given this is the best eclipse in a decade, everyone in Ireland should make sure they witness it over the two and a half hours that it will take place,” he said.

The ‘first bite’ will be taken out of the sun just before 10am, marking the start of the eclipse.

It will end at 12.30pm and times around Ireland will vary by just a few minutes.

“Maximum eclipse will occur a few minutes after 11am with up to 45% of the sun’s diameter being covered from Donegal, other places in Ireland will see at least 40 per cent of the sun covered.

“Given the Irish weather, it is important to note that you can see the eclipse for over two hours, so even if the weather forecast isn’t great, plan to watch the entire event, in the hope of seeing something,” Mr Moore said.

A solar eclipse happens when part of the planet is obscured by a moon shadow that blocks sunlight, either partially or fully.

The Irish Solar Energy Association (ISEA) provided this useful information for all sky-gazers and amateur astrologists:

The eclipse will be most pronounced in the North West of the country and will cover 29 per cent of the surface of the sun.

This type of eclipse is known as an annular eclipse and occurs when the Moon covers the sun’s centre but forms a “ring of fire” on its outer edge. However, this phenomenon will not be visible in Ireland.

A total solar eclipse is rare in Ireland, last occurring in 1727. But younger people in Ireland today might see the next, due to occur in 2090.

Safe viewing is essential, experts advise that you should never look directly at the sun and never use any binoculars or telescopes. The only safe way to avoid permanent eye damage is to use specially designed eclipse glasses.

Donegal to get amazing view of eclipse of sun was last modified: June 9th, 2021 by Staff Writer
Facebook0Tweet0LinkedIn0Print0