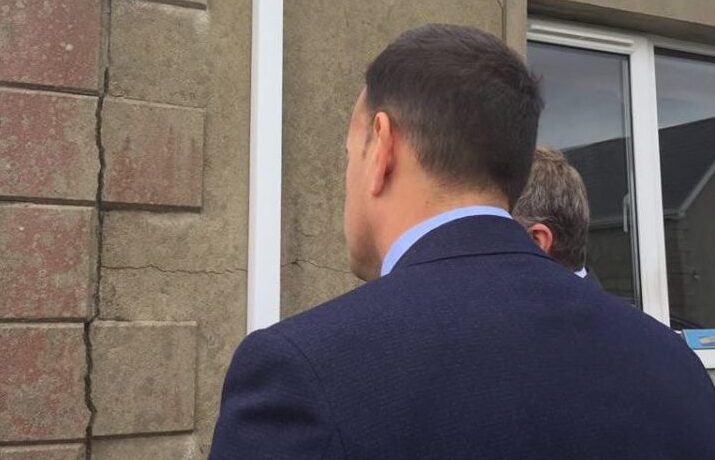 An Tánaiste Leo Varadkar has come under criticism from Donegal representatives today after commenting on the Mica crisis.

Mr Varadkar was slammed for being ‘out of touch with reality’ after commenting that some Mica-affected houses in Donegal and Mayo were above-average sized.

Mr Varadkar today questioned “is it reasonable to ask the taxpayer to fund the reconstruction of quite large houses?”

The Tánaiste said the Mica scheme is being examined so that it is fair and equal with Dublin’s 100% pyrite scheme, but told the Dáil that the average cost of fixing pyrite homes was €65,000, and it is much higher with mica-damaged homes.

Cllr Albert Doherty, the Cathaoirleach of the Inishowen Municipal District, has called on the Tánaiste to return to Donegal to see the damage caused by Mica.

“The Tánaiste’s comments demonstrate that he is completely out of touch with the reality of life for those living in Mica affected houses. These families, our friends, our relations and our neighbours, are seeing their homes literally crumble around them,” Cllr Doherty said.

“They are in this situation through no fault of their own. These families have been failed by regulations, failed by the system and failed by Government and that needs to stop.”

“I and others have repeatedly outlined to the Minister for Housing that the 90% redress scheme now in place is simply not fit for purpose and places far too heavy a burden on families already suffering financial stress.”

“It’s high time the Government got the message that nothing less than 100% redress is what is needed to tackle the Mica crisis in Donegal.”

Cllr Jack Murray commented: “The comments made by Leo Varadkar today after receiving a presentation on mica are absolutely disgraceful. They are the words of a man who doesn’t care.

“Questioning whether the tax payer should pay for houses that are ‘quite large’ is a calculated distraction by portraying the situation as affecting rich homeowners. He knows right well that houses of all size are affected and, regardless, the scheme is inaccessible to the majority because most people can’t afford to access it.

“The principle is the same however. Homeowners are not at fault. Just like those affected by pyrite in Dublin, they deserve the full intervention of the state to help them.”