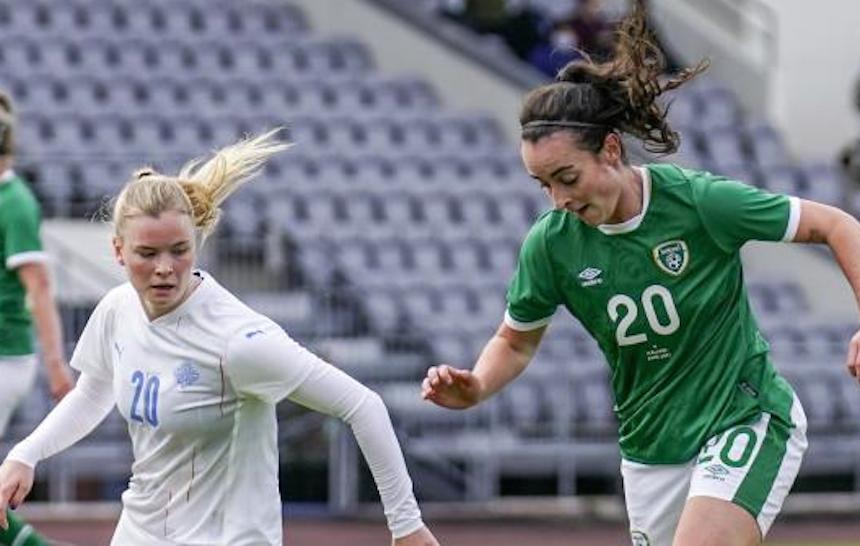 Barrett, McLaughlin feature as Ireland go down in Iceland

AMBER Barrett and Roma McLaughlin featured last night but the Republic of Ireland lost 2-0 to Iceland in a friendly.

Barrett started for the Girls in Green while McLaughlin, who was back in the squad for this international window, came on as a late substitute, while Ciara Grant was an unused sub in the game having also made her return.

Barrett, who was lively thoughout, hooked a left-footed shot wide from just inside the penalty area. It was a positive sign of Ireland’s intent to shoot when within distance of the opposition’s goal.

Iceland broke free five minutes later with Berglind Björg Þorvaldsdóttir but her shot was well dealt with by Courtney Brosnan. Up the other end, Connolly forced a save from goalkeeper Rúnarsdóttir with a shot from distance.

Early in the second half, Iceland almost broke the deadlock when Sveindís Jane Jónsdóttir got free inside the area but Brosnan put her off before Diane Caldwell charged down a shot.

When the goal did come for the hosts it was more through poor Irish defending as Þorvaldsdóttir pounced inside the area to poke the ball past Brosnan after breaking free from her marker.

Ireland tried to find a way back into the game and substitute Jessica Ziu added a lot of speed but a superb strike from Karólína Lea Vilhjálmsdóttir then ended the contest to secure the win for Iceland.