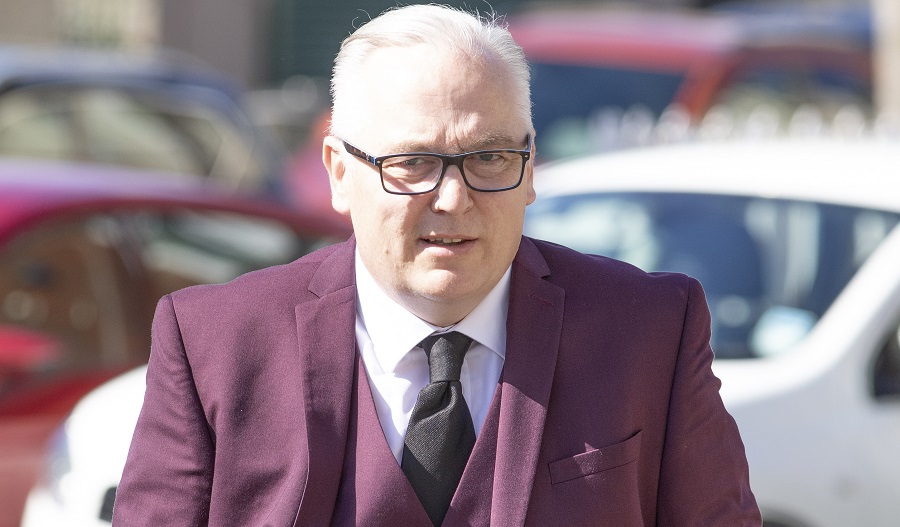 COUNCILLOR Frank McBrearty Junior says that a High Court case will be taken on behalf of his father, Frank McBrearty senior, against the Irish Government over the Mica crisis – and that an avalanche of others should follow.

Independent Councillor McBrearty has said that he is considering his position on the Council to aid with other cases against the State. There were, he said, people willing to donate funds to help the legal

Councillor McBrearty says he is ready to wage war on the State and has slammed the Mica Redress Scheme as ‘unjust’.

“There will be many battles fought before we win and we will win,” he said in a lengthy statement.

“We will do this not matter how long it takes.

“I am considering stepping down from the Council in order to concentrate 100 per cent on the multiple cases we will take against the state and anyone that wants to come along in that journey for true Justice are welcome to join us in this war. You can’t be nice when you’re fighting in a war.”

Cllr McBrearty told Donegal Daily that a ‘terrible injustice’ has been inflicted and says that the cause has become a ‘fight for justice’ rather than a campaign.

The home of his parents is among the thousands affected by Mica.

He told how his father, Frank McBrearty senior, is 77 and has heart problems and diabetes among other health issues. He said his father spent €750,000 building a new home which was his ‘pride and joy’.

“That joy is now sliding into the abyss,” Cllr McBrearty said.

“My mum in April decided to get their new home painted when we discovered that their were spider like cracks everywhere. We took the decision then that we were going have our homes checked properly to ensure that we had Mica or not and just over two weeks ago the disaster happened – my father’s house was confirmed as having mica.

“Dad and Mum’s house today will cost anything between €180 and €205 per square foot to rebuild, which will cost them in the region of €1.5 million by a contractor.

“We built our own homes to the highest standards possible. this scheme whether it’s 100 per cent or not, doesn’t allow us to re build our own homes again.”

The Government, he says, have failed the people with an ineffective scheme and the outspoken Raphoe native believes that High Court action is the only solution.

He said: “We have decided that when the reports are back the first of multiple statement of claims will be issued in the High Court starting with My Dad Frank Snr.

“We will seek permission from the High court that, due to the exceptional circumstances of Dad’s health problems, that his case be brought on as soon as possible.

“If we lose this case we will appeal to the supreme court and if we loss their we will then lodge that case in the European court of human rights and we will get justice for us to rebuild our own homes.”

Other pensioners like his father are suffering due to mica-affected homes and one placard stuck in the mind of Councillor McBrearty. The sign read ‘’It’s too late for me, I’m 70”.

“Who is going to help all the OAPs to rebuild their homes before they die?” he asked.

“This scheme or a 100 per cent one won’t, as people cannot afford mentally, physically or financially to wait 5, 10, 15 or 20 years to have their homes rebuilt. Just look at the snail pace the council and the state are dealing with mica applications.

“This unjust Government can shove their unjust redress scheme where the sun doesn’t shine.”

Councillor McBrearty was first elected to Donegal County Council in 2009.

However, he insists that he is now considering his political future.

He said: “People will ask why step down from the council, well when I wasn’t a politician people couldn’t criticise me that it was political,” Councillor McBrearty said.

“I am not institutionalised like many other politicians are and never will be. I don’t tell people what they want to hear or promise them the holy grail and if they don’t like it that’s their problem.

“The only thing that made me angry yesterday was all the politicians that spoke – where have they been to date?”

Separately Councillor McBrearty added to Donegal Daily: “I don’t need politics to be a powerful man I have already hammered this State.”

Asked about how he intends to aid mica-affected homeowners he said: “There is a lot of work involved in helping lawyers when we start issuing statements of claim. This issue isn’t half as hard as fighting the guards. This is one legislation and one issue that has failed the Irish people and the buck stops with the Government.’

Councillor McBrearty was among the thousands from Donegal who attended a protest in Dublin yesterday, where those in attendance called for the implementation of a 100 per redress scheme.

His statement: “I was very proud yesterday to be a Donegal man and I was very proud of the thousands of Donegal people that took to the streets of Dublin in order to show our unjust Government that we are not going to be treated like second class citizenss any longer.

“I hope they got the message loud and clear but I doubt it. As a proud Donegal man I want to thank the people of Mayo, Sligo, Leitrim, Galway, Clare, Derry, Tyrone and Fermanagh some of whom I talked with yesterday at the rally.

“I want to congratulate Paddy Diver for putting on the rally and the manner and dignity shown by everyone at the rally, which has shown this unjust Government that we demand Justice ‘nothing more nothing less’ and we won’t stop until justice is served ‘for the people by the people’.

“What I witnessed yesterday was like the day Donegal won the All Ireland Sam Maguire Cup. I had the honour of being Mayor and First Citizen of Donegal that day which I will remember until I die.”

The Raphoe based Councillor McBrearty launched a sideswipe at other politicians, from other counties who spoke at yesterday’s protest, including Michael Healy Rae and Jackie Healy Rae.

Councillor McBrearty said: “I don’t need any Kerry politician to fight for my family and friends’ corner…I am a proud fighting Donegal man that has already fought and won the dirtiest war ever fought against the state in its history…when all the cameras come out, all the politicians came out.

“All the camera wanting, attention seeking TDs that haven’t done anything to date were being interviewed one by one in the court yard of Leinster House. Deja vu or ground hog day comes to mind, it was like a flash back for me. Politicians need to stop using people lives as a political football.  “”