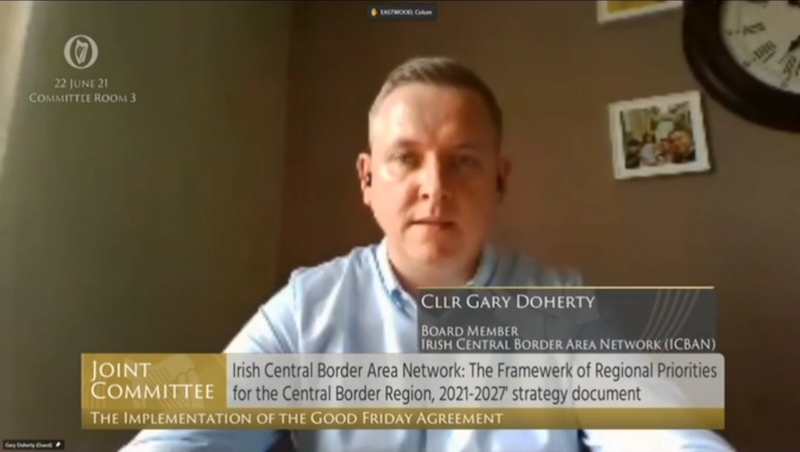 Importance of A5 road project to Donegal outlined in Oireachtas

The importance of the A5 project to the long-term development of the north west region was outlined in the Oireachtas today.

An ICBAN delegation presented to the Joint Committee on the Implementation of the Good Friday Agreement on its recently published ‘Framework of Regional Priorities’ document which outlines its strategy for the development of the region in the period 2021-2027.

Donegal County Councillor Gary Doherty joined the delegation and he told the committee that the importance of the A5-N2 project cannot be overstated.

Speaking to the Committee, the Sinn Fein councillor said the A5 Scheme is a vitally important flagship project for our region.

He added “We’ve identified in the Framework that this project would provide a strategic corridor which would address that regional imbalance that is at the core of the work that ICBAN does, but it would also connect communities, improve job prospects and address road safety which was also a high priority for the delivery of the Scheme.

“There have been over forty deaths on this road in the last fifteen years alone so just for that reason you can see the absolute necessity of the project for the safety of road users.

“We are all obviously extremely frustrated with the delays in the project which has been subject to three legal challenges since 2007. However, following a meeting between this committee and Minister Mallon on 12th April, the Minister assured us that she hoped the project could progress at pace.

“We were advised that the Public Inquiry would be scheduled for next year and that the Project was still achievable within the timeframe 2023-2028. This progress must be guaranteed by both the Dept for Infrastructure in Stormont and by the Irish Government commiting once again to the funding promised to complete the project, most recently in the New Deal New Approach Agreement.

“From our perspective in ICBAN, it is vitally important that the A5/N2 is always on the agenda and that we secure this critical project for the development of our region as its value simply cannot be overstated.”

Importance of A5 road project to Donegal outlined in Oireachtas was last modified: June 22nd, 2021 by Staff Writer
Facebook0Tweet0LinkedIn0Print0