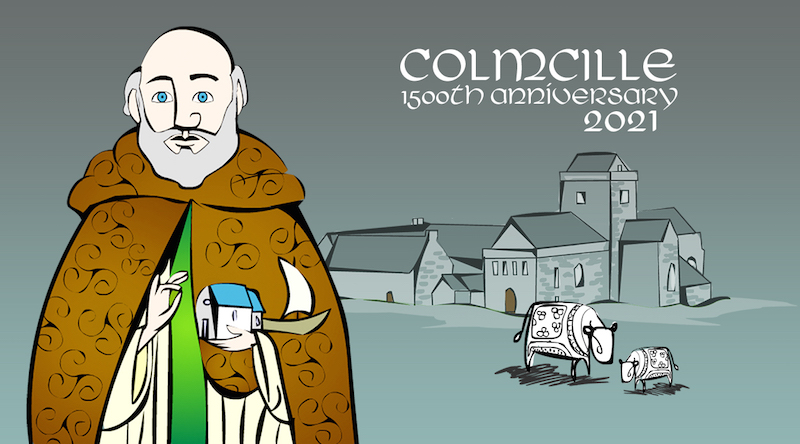 The Library Service is delighted to announce the Colmcille1500 programme of events to celebrate the saint’s close association with books and the literary world.

Colmcille, or Columba, is one of Ireland’s three patron saints, and the patron saint of Derry. He was born in Gartan, Co. Donegal on December 7th, 521 A.D. or 520 A.D.

He is renowned for establishing monasteries in Derry and on Iona and for spreading Christianity throughout Scotland. Colmcille died on Iona on 9th June 593.

The series of events are as follows:

Colmcille Life and Legacy: Exhibition of Book of Kells and Colmcille The Scribe

Central Library Letterkenny will host an exhibition highlighting aspects of the life and legacy of Colmcille. This highlight of this small exhibition is the fabulous Verlag facsimile edition of the iconic Book of Kells and Seamus Heaney’s beautiful work Columcille The Scribe. A bibliography of works on Colmcille held in the Donegal Studies Collection is available in print form and online at http://www.donegallibrary.ie/colmcille/

Colmcille Books and Beyond is a series of online lectures on the life and legacy of one of Donegal’s most famous sons. It is impossible to talk about the figure of Colmcille without mentioning his connections with the literary world. To some this may conjure up images of the iconic Book of Kells, to others it may mean the folklore and prophesies that abounds around this often controversial figure. To the modern reader it may call to mind the Chronicles of Iona where Colmcille is brought to life in a new and vibrant manner.

These lectures are free of charge and can be viewed online on the Donegal County Council YouTube channel: https://www.youtube.com/user/wwwdonegalcocoie/videos

Please see below for dates and times of the lectures:

August 14th at 7.00pm. “The Iona Currach” by Donal Mac Polin will explore Colmcille’s journey from Ireland to Iona and the subsequent project that became the Iona currach.

August 16th at 6.00pm. Inishowen based artist Tim Stampton will talk about the figure that inspired his series of original illustrations “The Maledictions of Colmcille” and the tales that surround this short tempered saint.
Renowned historian Brian Lacey will deliver the following talks on the literary heritage of Colmcille and challenge some of our preconceived ideas:

Local historian and author, Christy Gillespie will deliver two talks on the life of Colmcille:

August 17th at 6.00pm. “The Magic in his Word: The Literary Heritage of St Colmcille”

Author of The Chronicles of Iona, Paula de Fougerolles, will deliver a talk on the literary heritage of Colmcille.

August 21st at 8.00pm. “Colmcille the Legend”. Renowned author and storyteller Joe Brennan will talk about the folklore and legends that have grown around the figure of Colmcille.

Paula de Fougerolles’s Chronicles of Iona have brought the character of Colmcille to life in a dynamic and vibrant way for a new generation of readers. Her books are being read by book clubs hosted and supported by Donegal Library and by anyone interested in a terrific read. Readers are invited to participate in a live event where Paula will talk about her books and hold a question and answer session. Copies of the books can be requested through Donegal County Library http://www.donegallibrary.ie/
This event will be hosted through GoToMeeting and must be booked in advance as numbers will be limited to 100 participants. Contact Central Library at 074 91 24950, for further information and booking details.

Colmcille Digital Schools’ Folklore Project
The Schools’ Folklore Collection was carried out between 1937 and 1939. School children were encouraged to collect and document local folklore. This resulted in 267 pieces of folklore relating to Colmcille, the majority of these (172) from schools in County Donegal.

The aim of the Colmcille Digital Schools’ Folklore project is to raise awareness and interest in the commemorations of the 1500th anniversary of the birth of Colmcille among primary school children. It also aims to revitalise the folklore of Colmcille and revive interest in the Schools’ Folklore Collection by providing a 21st century version of the stories in a digitally animated form, accessible to all members of the community.

Donegal County Library in association with Libraries NI, Meath County Library and Sligo County Library has worked closely with staff from the Nerve Centre, Derry on this exciting and innovative project. Five primary schools from each county with close associations with Colmcille have worked remotely on digitally animating their stories of this fascinating character. This contemporary body of work will be highlighted in a showcase event on December 7th 2021. More details will be available later in the year on www.donegallibrary.ie