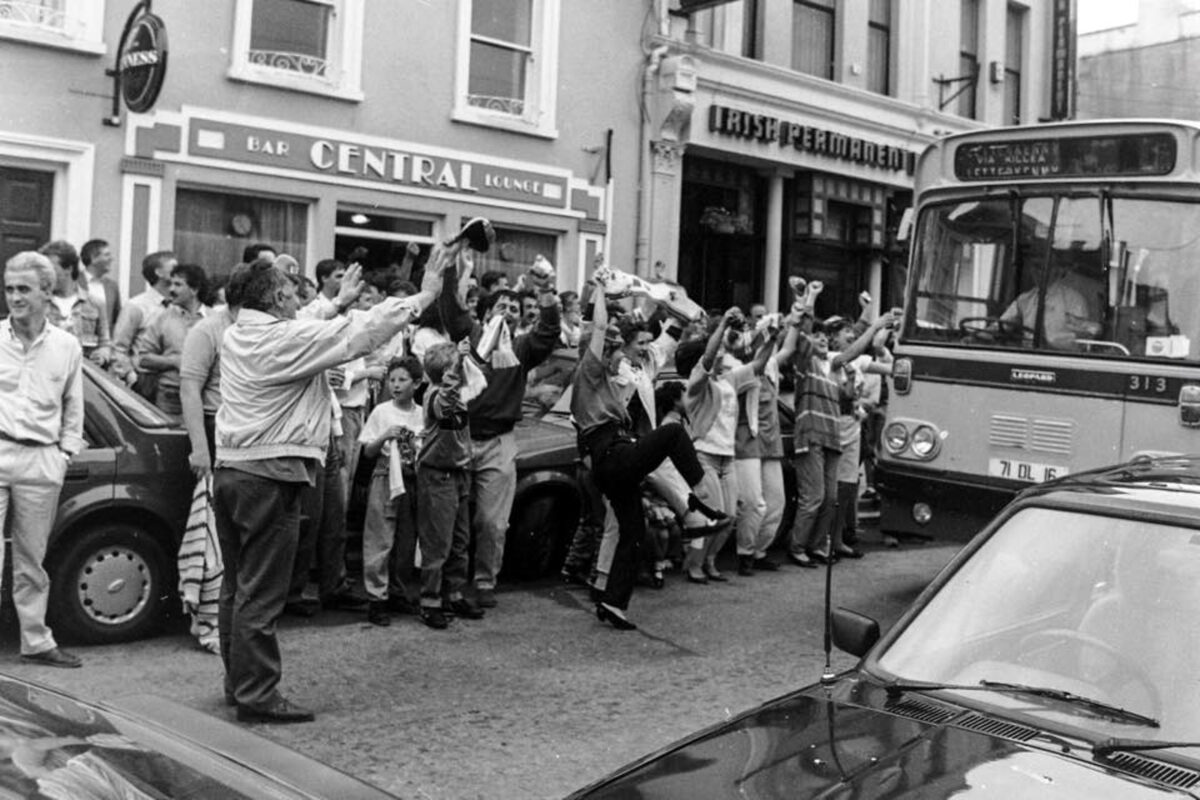 Motoring Columnist Brian McDaid looks back at the weekend in Letterkenny and how the behaviour of a few overshadowed the efforts of true car enthusiasts.

Is she for sale? I asked the hopeful question to a weekend visitor to Letterkenny on Sunday morning. He had his twin cam Corolla loaded up and was getting ready to return to the other side of Ireland. The 36 year old Corolla is a Japanese import as is his Toyota Previa which he rescued from the crusher and converted it into a campervan. He normally drives the Corolla up to Donegal in June but this year he transported it behind the camper on an old twin-wheel trailer. Two old builders’ planks were shortened for two ramps. 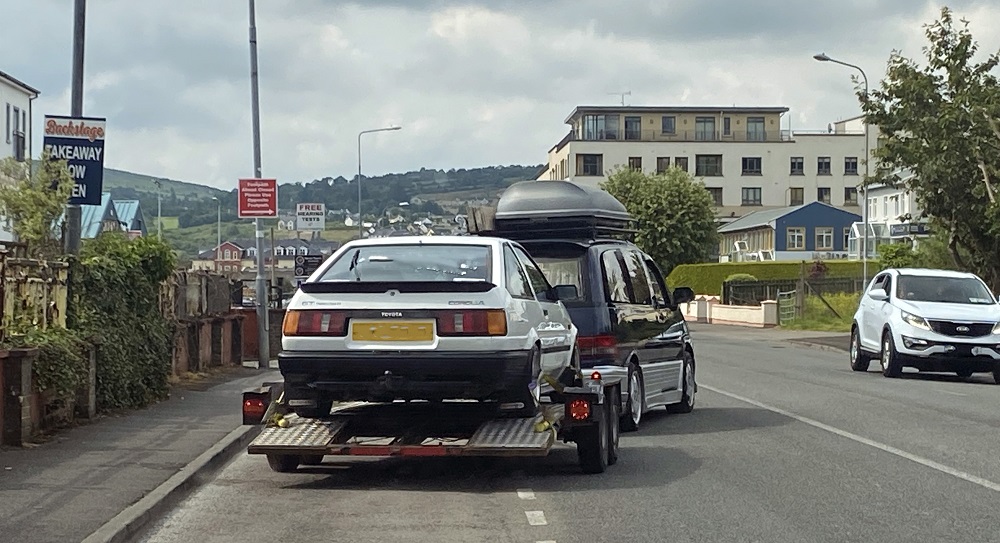 The Toyota Twin Cam of a Tipperary teacher who came to Donegal at the weekend to meet up with other car people at the weekend. Photo Brian McDaid.

Donegal didn’t disappoint, they camped out in Rathmullan over the weekend and cruised up to Letterkenny. He’s on his second engine and his third gearbox, both of which are getting harder to source. It was his twin cam that gave me the reason to approach him and have a conversation about the weekend events in Letterkenny. Four Cibie spotlights, two up, two down, minilites wheels and wider tyres all set off this hot classic. We both agree that there were fewer of the twin cams in Donegal this weekend possibly because the rally was not on.

I owned a twin cam many years ago myself, one of only a few that were originally first registered in Co. Donegal back on the 13th of January in 1986. I was the second owner a few years later.

Talking about the days that I own my twin cam, I mentioned that the only modification that I did was upgrade to mintex brake pads, which worked better if the brakes heated, and some 33 years on the twin cam sitting on the trailer on Sunday morning was fitted with the same type of mintex upgrade brake pads three decades on. The owner of the twin cam prepared and presented his car for the weekend showing in Co Donegal. A secondary school teacher from Tipperary, this is not the profession of car enthusiasts you would imagine would be into cars but this has always been his hobby, cars, Toyotas, the old AE86 rear wheel drive Toyota Corolla that come standard with a limited slip differential in white was his pride and joy. And there was the moment when I couldn’t help but admire this schoolteacher so happy in his own skin, not worried what others might think of him

Another car enthusiast, this one from Donegal talked about spending weeks getting his car, a black diesel VW Golf ready for the weekend. His car is his life. When he was in secondary school when everyone else was interested in football he was into cars, looking forward to the day he could get on the road. His car has a lot of modifications from increased turbo size, bigger free flowing stainless exhaust system and a lot of work went into remapping the engine management system. A graphite clutch, to transmit the increased power to the wheels, wheels from a Range Rover with modifications to fit the hubs on his golf.

Talking about the weekend, a lot of efforts by a lot of car enthusiasts who managed to get their cars looking their best for the weekend has been overshadowed.

They said things like: “The interest in cars in Donegal is massive, so many were looking forward to this weekend, a lot of us meeting for the first time since the lockdown.

“It has been a very difficult time for us young people.

“The weekend was one we were waiting for.

“The amount of people that turned up at the weekend that have no interest in cars at all but were set on upstaging things by behaving like real Idiots. 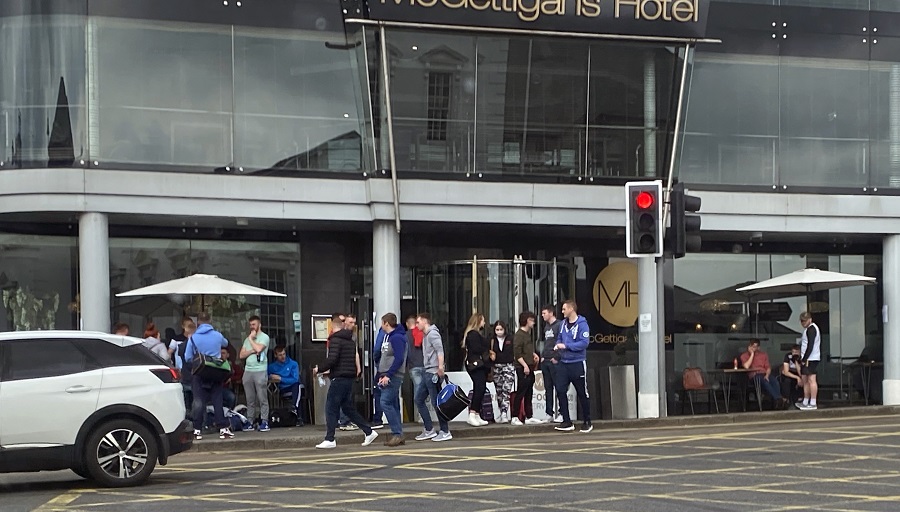 The third person I met on Sunday started off by saying “We’ve lost our wee town”, he said trying to come to terms with the weekend that passed in Letterkenny. He looked on in disgust as he watched visitors eating their breakfast sitting in the cars that they slept in the night before, The irony of this was that moments before that our townie was pushing a bag of his own household rubbish into a street bin. Normally I feel sorry for him when I see him regularly doing this and his efforts to avoid paying household bin charges but his two sets of rules of one for him and one for others wasn’t sitting that easy with me.

Years ago, the late Nellie Mc Govern closed the doors of her pub for the Letterkenny International Folk Festival; her locals could still get in if they went down the lane to the side door and knocked at the door. Nellie ran a very successful bar serving one of the best pints of Guinness, her secret was that it had one of the shortest distances to travel from the barrel under the counter to tap a few feet above it. (Not that any tourist would ever find that out.)

Sundays were her big night for music and dancing down in the lounge which had a wee ramp running down from the bar. As a child I remember sitting with a packet of crisps and bottle of mineral with a straw in with my father who was a regular in Nellie McGovern’s on the weekend of the Folk Festival with the door closed. Nellie had her own customers and was happy with that. She didn’t want the fuss of dealing with the crowds that poured into Letterkenny all them years ago. I remember them folk festivals for them great days of the town packed out to capacity and the great three days of the town letting its hair down, the highlight of which was the industrial parade where local businesses, the farming community and marching bands mixed in together to take tractors trucks, Morris dancers marching bands and all down the Main Street. All the floats had people laden down with buckets of Emeralds and Colleen sweets from the near by Oatfield sweets factory which they threw out to the children along the streets that were there in the thousands that arrived. Then many years on, I remember the unplanned days when we got behind the Ireland team as we watched them on the telly in Europe and in the World Cup and we celebrated out on the streets and stopped the traffic. They were great times which we look on so positively for the memories they made. 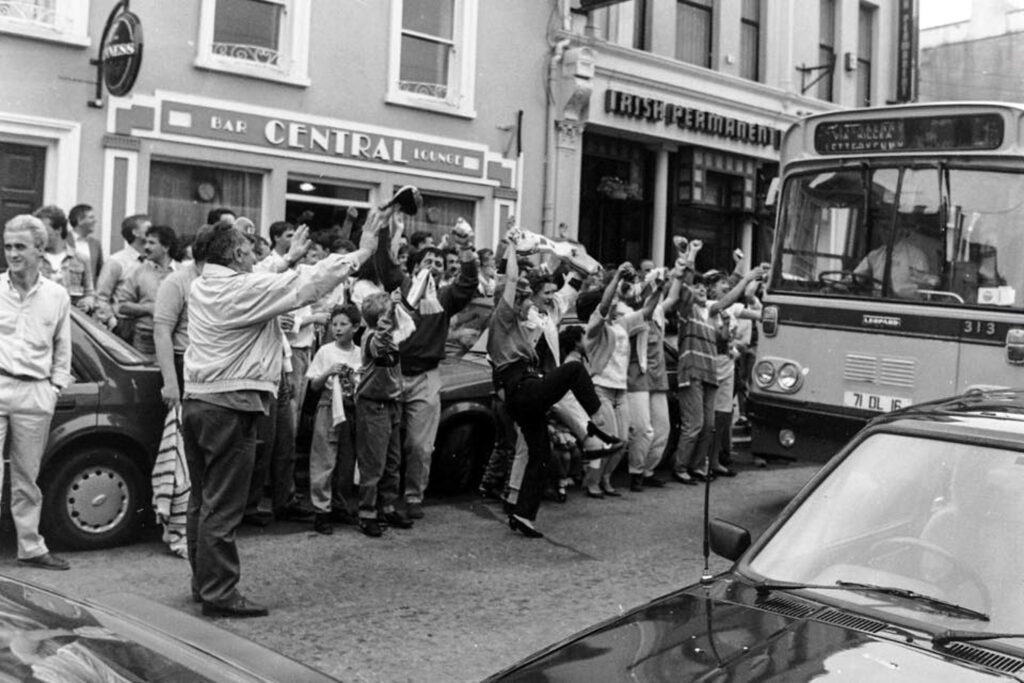 Celebrating Ireland success on the Main Street of Letterkenny in the European and World Cup. Photo Brian McDaid.

I interviewed these few drivers this week and I have to be honest I felt as if I was interviewing myself, I did the same growing up myself. I was always into my cars. A picture that my brother posted up for Father’s Day this week put this all into sharp focus. It was taken at the back of our house in Glencar of my father petting our dog Rover, my father looks so young in it, far younger than I am now, along with all the old fields, Crawfords and Mc Dermotts in the background where Glencar park and the Glencar shopping complex are now built. But for me it’s the wing of our old blue Ford Cortina that interests me the most, and the shine of it reminding me that my life also once evolved around cars, most would say it still does!!

Wheels
I remember the efforts me and my brother Nelius put into finding the wheels that were on the car. Alloys were well out of our budget so we settled for the steel “GL wheels” with the dish out, we would have loved the standard wheel on a 1600 escort sport, but could not find them known as dished out. it was the first time we did a full sandblast which brought them back to the steel. Then they were carefully sprayed silver and let sit to they were completely dry before we painstakingly started the slow job of painting the 50 black squares on five rims that made the steel wheel look like a minilite at a glance. We then went in search of four chrome trims four of the small chrome hub caps and 16 chrome covered wheel nut covers. Always at hand was tyre paint of the sun of a gun to give the tyres that fresh new look.

By day, the Blue cortina sat in the ESB yard on the Port Rd that my father would use to go to work, but in many evenings the Cortina was on a “turns” system where both of us were named on his insurance. I would say that our name were on other “notebooks” back in the day as we spent evenings driving around Letterkenny, and a few cruising trips around the car park of the Fiesta Ballroom which by this stage was used for roller discos.

The first car that I owned was a bread van at 19 years of age selling Ormo bread for a few years before getting a chance to buy the car of my dreams a Golf GTI, I have Gerard Foley to thank for the only photo I have of me sitting in the Main Street outside the video shop at the foot of the town proud as anything in my black GTI, drums and brake callipers painted red to match the pinstripe that run along the side complete with the red AXE- TAX sticker. 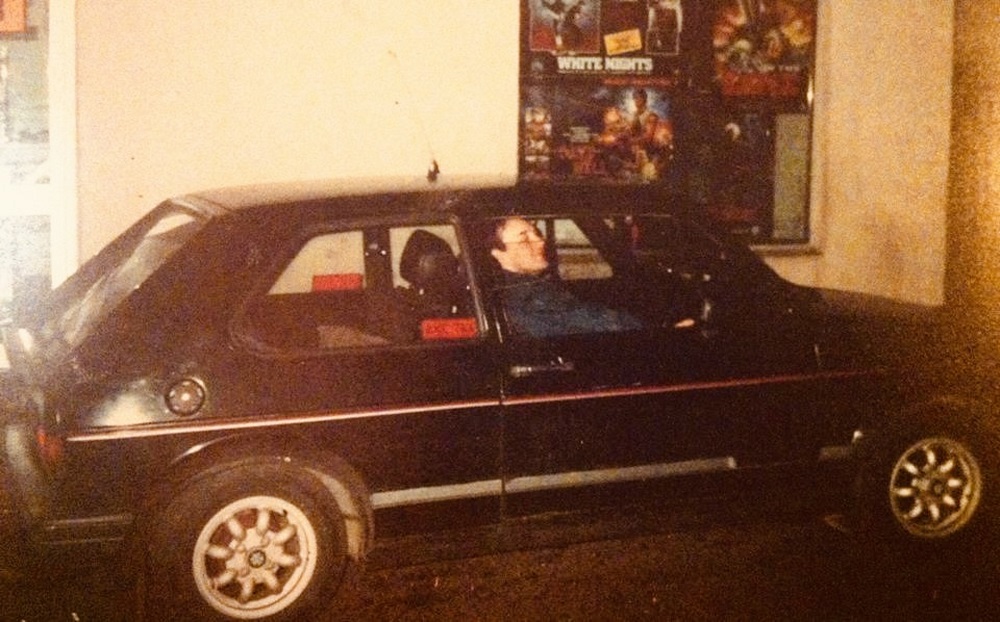 Sitting in my Golf GTI many years ago on the main street in Letterkenny. Photo By Gerard Foley.

The was a lot of people that were away out of line at the weekend as the unmarshalled crowds made a show of themselves, The sad thing for me is that a lot of people went out of their way to highlight this and might have done more to promote everything that was bad about what happened at the weekend and in doing so also tarred everyone with the same brush.

For what it’s worth I think it’s time to talk ‘to’ and not to talk “at” the people that attracted so many people to Donegal.

The people that visited Letterkenny at the weekend might not be what people might class as tourists but they did make a journey for pleasure or culture.