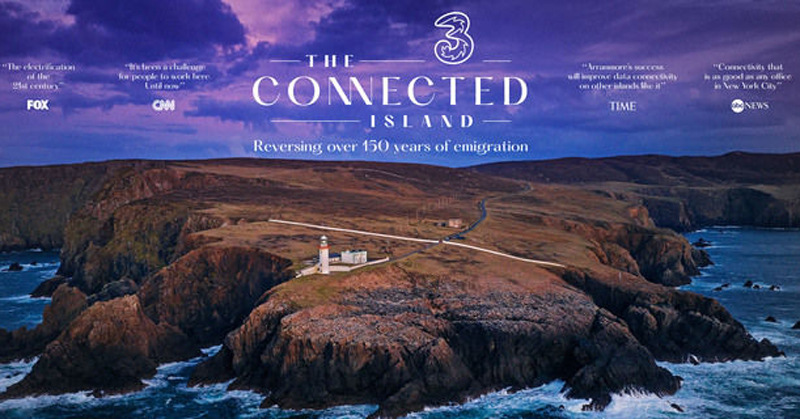 An advertising campaign telling the story of Arranmore’s digital future has picked up an international award.

An impactful film called ‘The Connected Island’ was produced on Arranmore in 2019 to promote the work of Three Business as it brought high speed connectivity to the island.

Cannes Lions: The International Festival of Creativity has been championing creative excellence since 1954 with the goal of providing a global destination and the definitive benchmark for creativity that drives progress.

The Connected Island campaign promotes Arranmore as a great place to live and work, with the challenging brief of reversing 150+years of emigration.

Once Three’s network and technology and a digital hub was installed on Arranmore, Boys + Girls let the islanders do the talking and bring the magic of Arranmore to life in a more personal and captivating manner.

The campaign involved a film and a series of open letters, with the Arranmore Island Council, declaring the island open for business and inviting people to live, work, and connect.

The strategy worked, according to Boys + Girls, who achieved media coverage with top-tier US networks, to prime-time TV in Australia, to national UK media, and a potential reach of 1,150,912,505. Boys + Girls reported over 3,500 enquiries to move to Arranmore. Tourism increased by 84% giving the local economy the boost it desperately needed.

But most importantly, the population of the island grew by a massive 11% – securing the island’s future for generations.

Delighted + honoured seems to be tradition when you win a Gold @Cannes_Lions. But we’re going for ecstatic + stupefied, overjoyed + wonderfilled, giddy + overstimulated. Thanks to all the team @ThreeIreland and the wonderful people of Arranmore. pic.twitter.com/TAMcyk3poy