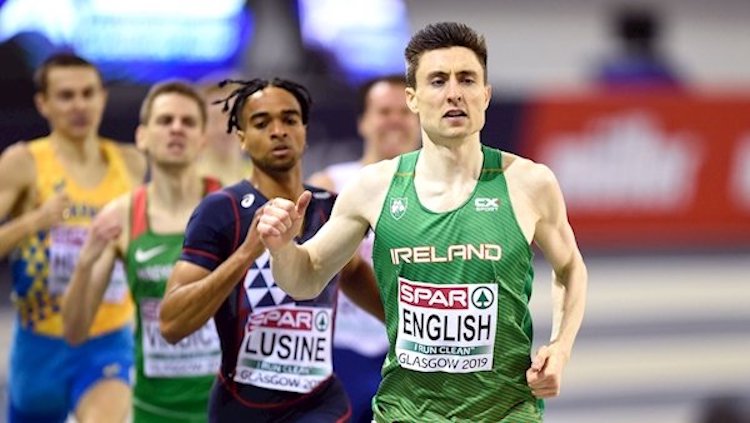 English goes to Leverkusen aiming for another world-class run

MARK English will look to maintain his world-class form on Sunday when he races in Germany.

English’s whistle-stop tour of Europe continues on Sunday at the True Athletes Classic.

The Finn Valley AC man has produced three superb performances in the last couple of weeks and has opted to run in Leverkusen as opposed to competing in the National Track and Field Championships in Santry.

Most recently, English won an 800m in Karlstad, Sweden, on Tuesday.

There, he led the way in 1:46.50 having been second at Meeting Madrid on Saturday in 1:45.22 – a time that was only 0.02 seconds off the Olympic qualifying time. The previous Sunday, he won in Sollentuna and he remains keen to bag

English is in a qualifying spot for the Olympic Games ahead of Tuesday’s cut off.

Weather conditions were against English in Karlstad, but the three-time European medalist has shown his best form in some time over the last fortnight.

Indeed, English’s time in Madrid was his fifth fastest of all time and his best since 2014.

Last year, English was not permitted to enter the National Championships by Athletics Ireland over Covid-19 protocols despite a strong appeal led by Patsy McGonagle, the former Irish Athletics Team Manager.

This weekend, rather than appearing at Morton Stadium, English will answer the gun at the Manforter Stadium in Leverkusen. The True Athletes Classic is a Continental Tour bronze level series.

Donegal will have plenty of eyes on Santry for the National Championships, though, with the likes of Kelly McGrory and Conall Mahon (Tir Chonaill AC), Sommer Lecky, James Kelly, Gavin McLaughlin (Finn Valley) and the Lifford-Strabane AC duo of Adrienne Gallen and Brendan O’Donnell among the county’s leading medal prospects.