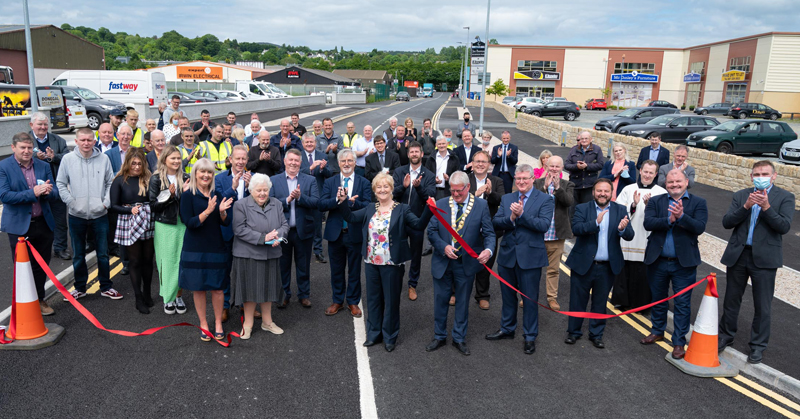 Longstanding ambitions were celebrated at the official opening of the Joe Bonnar Link Road last week.

Last Friday the 18th of June the Joe Bonner Link Road was officially opened by Cllr Rena Donaghey Cathaoirleach of Donegal County Council with Cllr Donal Coyle, Cathaoirleach of the Letterkenny-Milford Municipal District in attendance. The road has been a high priority for Donegal County Council and provides a connection between the Neil T Blaney Road and the Port Road. 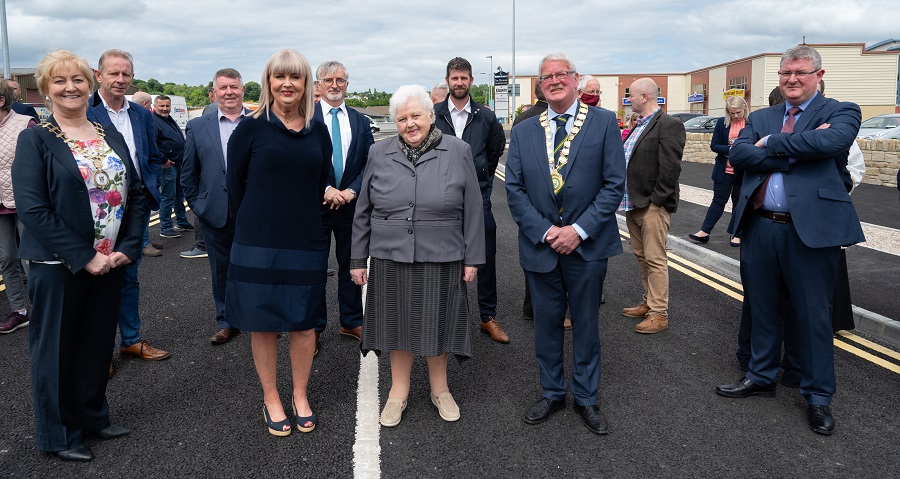 The road is 323 metres long providing a new Urban Landscape incorporating footpaths and cycleways with the Junction with the Neil T Blaney Road due to be signalised before the end of the year.

The Road has been constructed across difficult ground conditions and has been future proofed with the provision of foul sewer, watermain, ESB and telecommunications infrastructure in collaboration with Irish Water, ESB and Telecommunication companies. The works were completed to a tight deadline with the project being designed and constructed almost entirely by Donegal County Council staff.

The project was funded by European Regional Development Fund (ERDF) under the Designated Urban Centre Grant Scheme (DUCGS) and Donegal County Council. The ERDF fund was administered by the Northern & Western Regional Assembly.

Speaking at the Opening, Cllr Rena Donaghey, Cathaoirleach of Donegal County Council stated that “The Joe Bonner Road is an important strategic link in the Letterkenny Road Network. Named after the late Joe Bonner, an entrepreneur who developed the Port Link Business Park. I know there are some members of the Bonner family present today and I’d particularly like to welcome them.”

Cllr Rena Donaghey also stated “for projects of this type there are always a large number of people involved. I know that other speakers today will be acknowledging individual contributions but I would like to pay tribute to all who worked on the project and to congratulate you all on an excellent outcome. In all, this new section of roadway represents another high quality addition to the roads infrastructure in the county that will serve the people of Letterkenny and Donegal into the future and I am proud to be here today to perform the official opening”

Also speaking at the opening Cllr Donal Coyle, Cathaoireach of the Letterkenny-Milford Municipal District said that he “acknowledged the funding from the ERDF but would also like to commend the vision of the former Letterkenny Town Council who ring fenced monies for this road over many years and made sure it would be available to co-fund with the ERDF funding.

“This was a longstanding ambition of the former Letterkenny Town Council and it is great to see it finally in place now.

“We expect that this new section of road will help to address some of the traffic problems in Letterkenny and will complement other planned improvement works such as the signalising of the Pole Star roundabout and the Ballyraine road that have recently commenced”.

Brendan O’Donnell, Director of Services, officiated the proceedings and in addition, Mr John McLaughlin, CEO of Donegal County Council also added his compliments and thanks to all those involved in the delivery of the project.