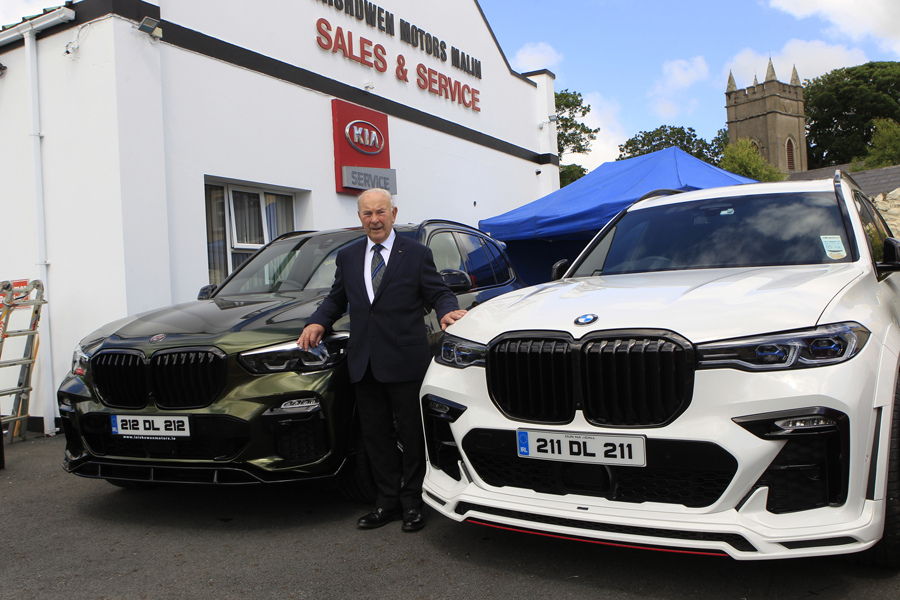 You’re a long way from home today, Hugh Mc Gonagle calls to me across the bonnet of his beautiful red Porsche which is parked up at the front of Inishowen Motors Malin, over the years I’m more likely to see Hugh in Letterkenny in Rossview Business Park where the family run the Mc Gonagle Group business which includes Donegal Tile Centre. These days he’s in my hometown, but today I’m in his home town and Malin town and he is here to celebrate one of the town’s success stories.

Mind you it’s hard to know if it’s Milan or Malin we’re in, with the line of cars parked up 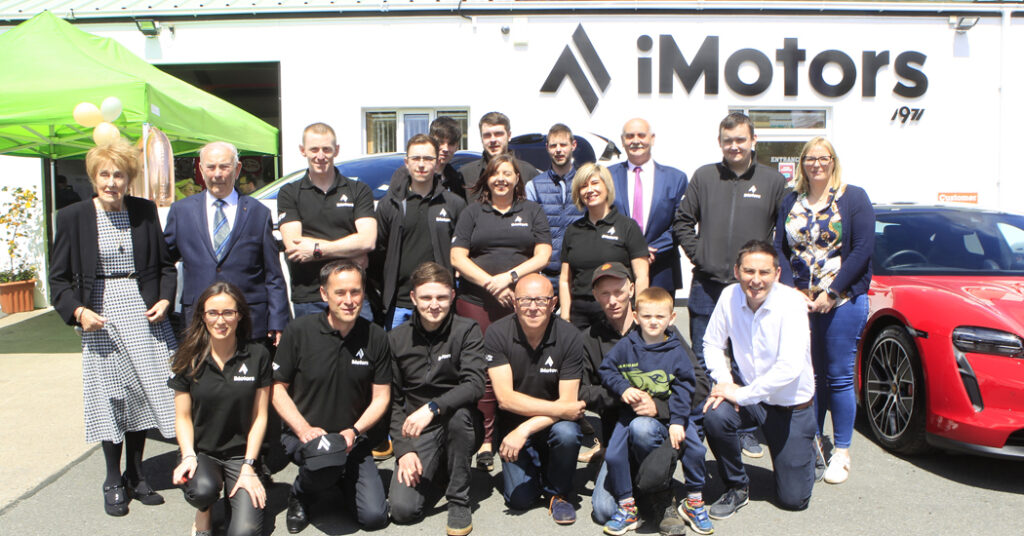 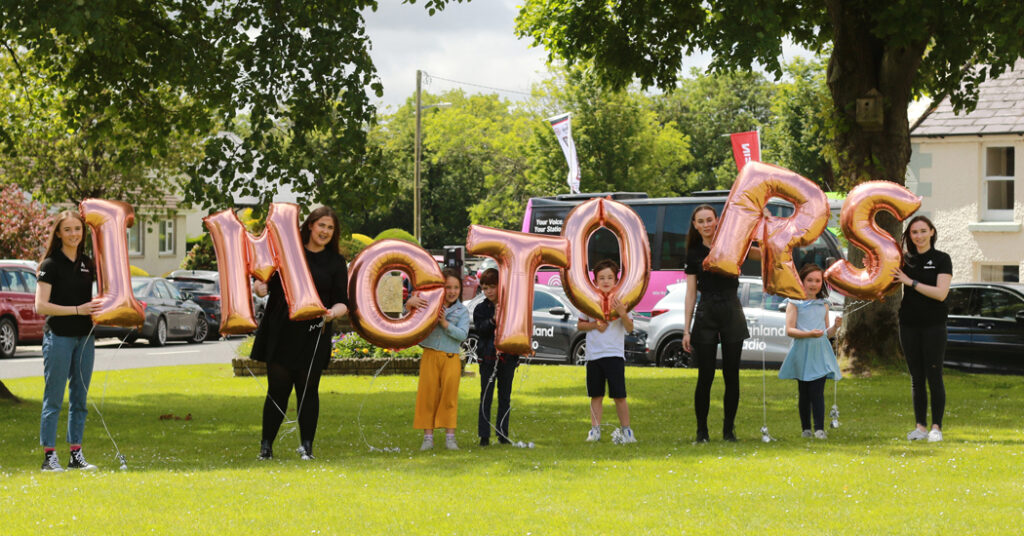 At the corner of the village green, even though I spotted a Lamborghini going through but I couldn’t be sure, this one had a silage trailer hooked onto it.

Tractors always criss-crossed Malin town even the Malin of my childhood which were the happiest few months of growing up heading to the bog or the moss as it’s called up here to take home the turf, taking in silage or livestock in transport or even hauling loads of wool up to Ballyliffin with the Quigleys.

Today it’s a bit jammed in the west end, the Henry’s of the motor business side of the family have stolen the stage from their famous cousins the Henry Sisters for a day and are celebrating a half a century since John Henry McLaughlin and his wife Susan of the started their business in Malin Town.

Tourists in old German camper vans and big touring motorbikes lift off the gas and slowed up to have a look around them as they made their way up to the most northerly point of Ireland, Malin Head.

Malin was buzzing and Sean Henry in full the flow waving in any locals who were passing, inviting them in for a cuppa or a bite of something to eat. Then I watch as an old 4×4 park up on the footpath further out the Lagg road and farmers in their working clothes stole back to the garage to take up the offer of a cuppa but more importantly a chat. “Get a picture of that rogue, Brian,” Sean Henry would call as he would pull a neighbour into a photo group. Seamus Henry who runs the Drumkeen dealership is stepping about drinking the odd cuppa tea and tucking into the sandwiches holding his head out from his body so he doesn’t get his white shirt covered. 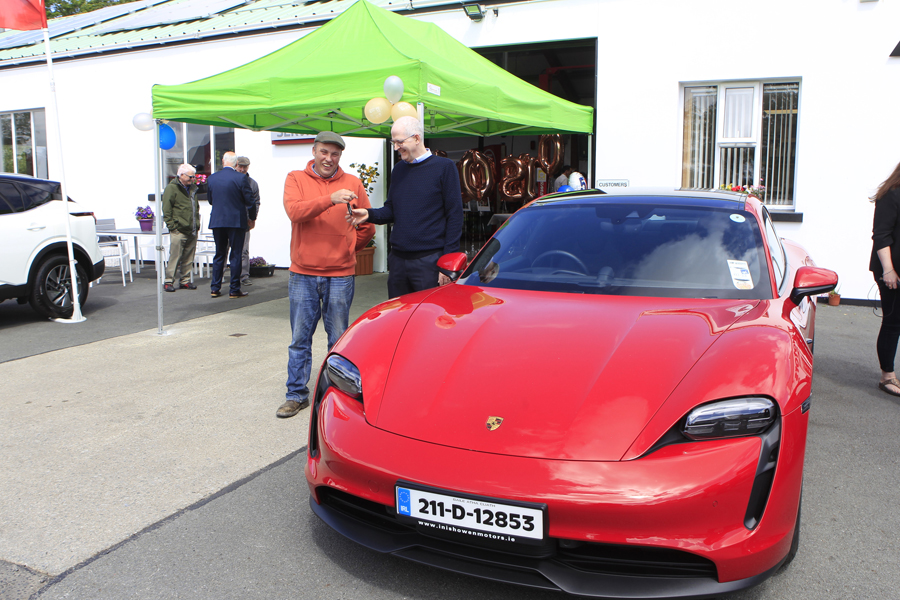 I’m supposed to be working here today, but it’s easy to get distracted “Did you see this man’s digger’, nah where is she, ‘she’s down at the side of the garage ‘Hugh McGonagle replies, Declan Henry and myself take a walk down to look at his digger which was used to level out the back yard a bit with a layer of stone and lime. Proud as punch in green writing the word Henry is printed on the arm of the digger, Henry was his grandfather Henry McLaughlin, that Henry takes their name from. Declan tells me he has only come back home at the start of the first lockdown from London, before that he moved from Ireland when the first crash in the Irish economy started.

Now he’s back home again and like all three generations of the Henry family it was all hands to the pump to celebrate the first 50 years. 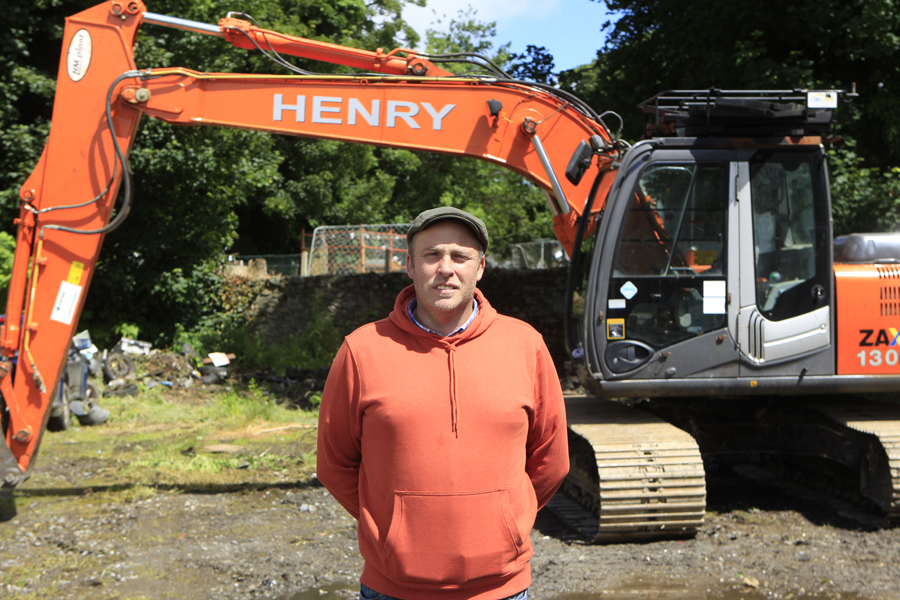 Declan Henry Mc Laughlin back in Malin after spending a few years working in London, pictured with one of his Hitachi diggers proudly displaying his grandfather name. Photo Brian McDaid.

Even the younger children mark the day running across the tree with the iMotors balloons to open the next chapter, for the expanding business to cater for all of Donegal and further afield.

John Henry McLaughlin and his wife Susan purchased the business in Malin in 1971. With the increasing sales of both new and second-hand vehicles, the business went from strength to strength and a second dealership opened in Drumkeen. Today, the Malin business is run by son Sean, while the dealership in Drumkeen is run by son Seamus; the brothers are joined by the next generation of the McLaughlin family, while dad John still plays an active role as managing director. As part of the 50th birthday celebrations, Inishowen Motors also unveiled a new brand identity, iMotors. 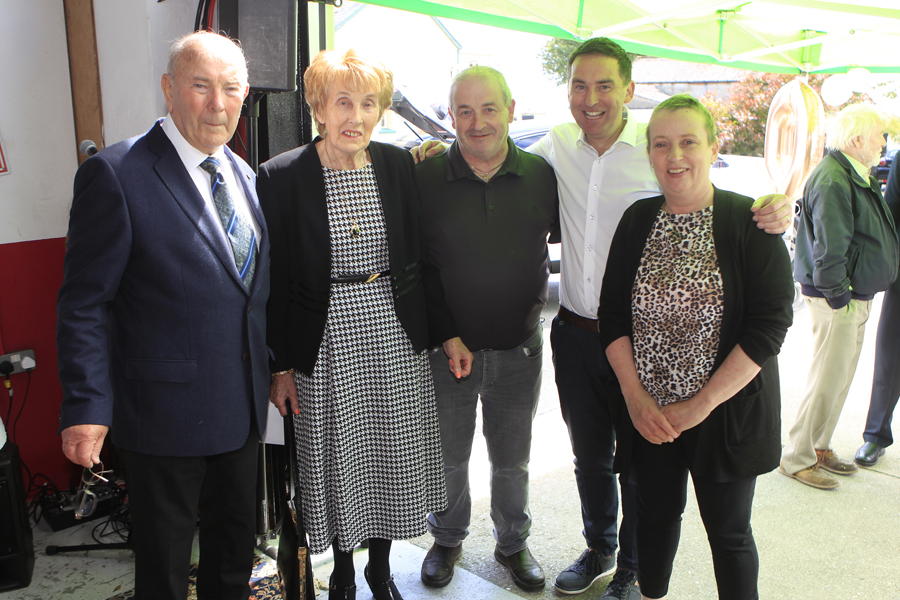 Commenting on the history of the business, John McLaughlin said: “In the early days of the business, it was mainly a used car, service and repair garage and because of its location in a rural, farming community, we dealt with everything from tractors to buses, bicycles and even scooters.”

Sean McLaughlin’s first job in the business was manning the petrol pumps on a Saturday, and he has fond memories of that time: “They were the old-style Esso Pumps and when the power went off, you had to twist the handle and manually pump the petrol. In 1983, I started my mechanics’ training with ANCO in Letterkenny. I then began my ‘apprenticeship’ in the family business.”

In 2000, son Seamus joined the business and the building was modernised; they remodelled the front, put on a new roof and moved the garage entrance; they added closed pits and installed car lifts also adding new offices to the front, including a sales office.

Commenting on the 50-year milestone, Seamus McLaughlin said: “It’s great to be celebrating 50 years in business and we’re delighted as a family by all the support and well-wishes that we received from the community in Malin and across Donegal, so we want to thank everyone for that. We now have three generations of the Henry/McLaughlin family involved in the business, and we’re very proud to have a customer base which also covers three generations. Our team has seen a lot of changes over the past 50 years, from two stroke petrol engines to turbo-charged diesel engines, and the move from all manual labour to computer diagnostics and today’s electric and plug-in hybrids. And now we’re facing into the next 50 years as iMotors, and the inspiration for our new logo comes from Malin Green, so we’ll never forget where it all began. We now have over 30 staff between Malin and Drumkeen and we want to thank all our staff and customers, past and present, who have supported us on the journey. We’re looking forward to the next 50.” 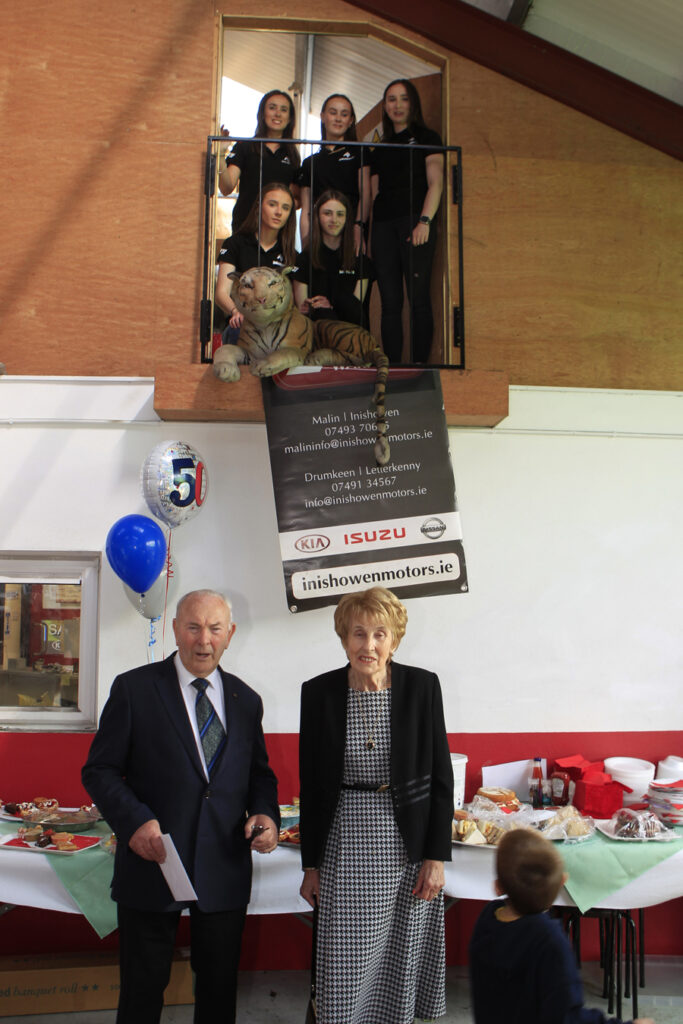 John Henry and Susan McLaughlin at the 50th anniversary of the motor business he created pictured with some of his grandchildren who ware all out to support the celebration last Friday. Photo Brian McDaid.

As well as celebrating 50 years in business in 2021, the Letterkenny and Malin dealership is celebrating 20 years with Kia and 10 years with Nissan. In 2001, the business began a Kia dealership for County Donegal, one which they maintain to this day, and in 2011, Inishowen Motors took over the Nissan dealership for the county. Michael Coghlan from Nissan Ireland was in Donegal for the 50th birthday celebrations which also marked the launch of the new Nissan Qashqai.

Visiting a packed Malin last Friday it was lovely to see that this wee town hasn’t lost any of its warm welcome that people like the late Lily McGonagle, Willie Joe and his sister in law Madeline Mc Clean who extended a warm welcome to us as children when we first spent our summer holidays there nearly 50 years ago just after John Henry opened the doors of his garage. 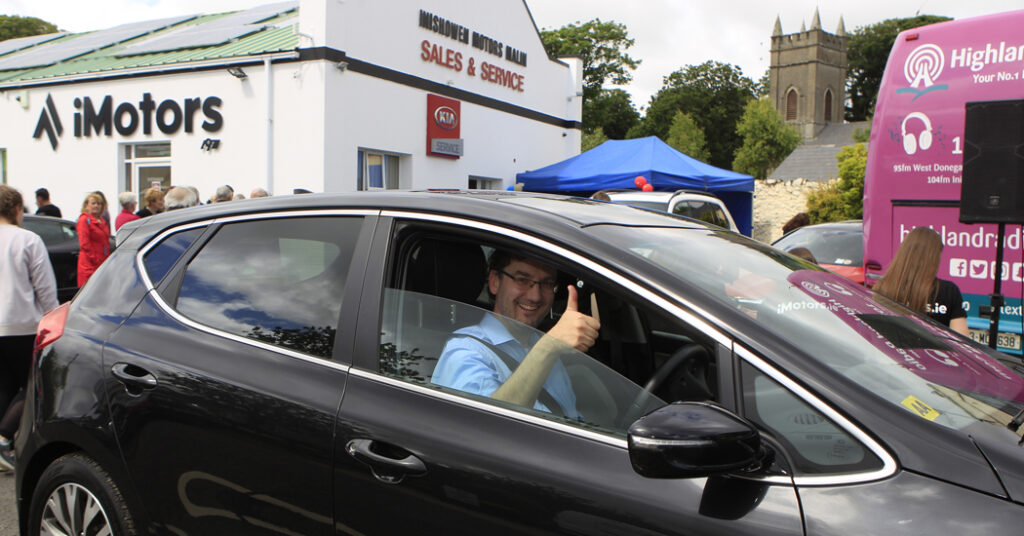 Looking through the photos of a great day in Malin two people reminded me of members of their family that went before them, Declan Henry standing at his digger reminded me of his late uncle Paddy White Paddy Mc Laughlin, his mother’s late brother. And a wee wave from Keith Stewart as he pulled away after taking delivery of his car from the new iMotors reminded me of his late grandfather Harvey Stewart who was one of the men that built the garage originally, both Paddy White Paddy and Harvey Stewart were people from Malin that my father often spoke about about his days when he first went to Malin in the 1950’s