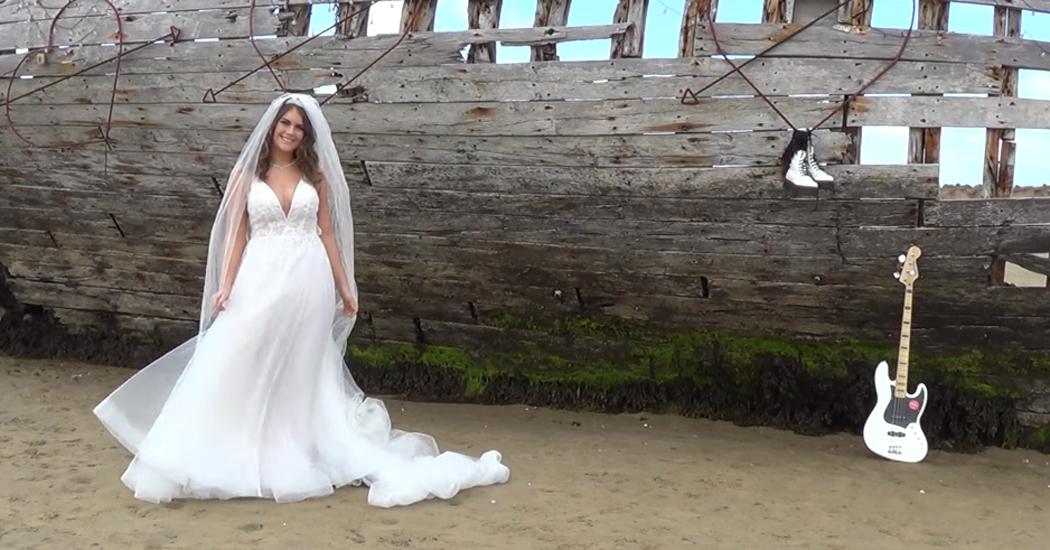 A new song has been released today to lift the spirits of all brides after a most uncertain year.

‘This Bride’ is the new wedding song written by Bri Carr and performed by Kelli McGrory.

The accompanying video celebrates Wild Atlantic Brides of all ages against a backdrop of a stunning Donegal canvas. Watch here:

The video is themed on the adaptation of the lockdown weddings, a new Ireland, opening up to a new reality, and all showcasing the diversity, unity, range and beauty of women in bridal gowns aged from 17 to 77.

Letterkenny musician Bri Carr wrote the song as a wedding gift to her younger brother, Paul McDaid, who is marrying his fiancée Lorissa in 2022. The couple live in Philadelphia and have been unable to come home since the pandemic began.

But Bri’s gift reaches across the Atlantic and beyond following its premiere today.

“The whole audio production is stunning,” she said. “It is the first song I have written in over 30 years that actually completely captures the essence of what I am trying to express musically. It is fresh, modern and yet very much celtic and traditional.

“We all think it deserves to be a hit, with every wedding singer, bride and wedding band belting it out in every Irish corner of the world over the next decade.”

Brí asked NorthWest Brides Wedding Singer of the Year Kelli McGrory from Fanad to be the vocalist, and local Wild Atlantic Women members Louise Doherty (Reel Tours) and Sinead Gibson (Arcanadh) to accompany on the track, which was then produced by multi-instrumentalist Yvonne Fahy (Trad on the Prom, Galway).

Brí adds: “The video is being launched on WeddingJournal.ie today, and on our own social media, with the quirky, beautiful, rugged and refreshing videos from Slieve League to Malin Head, with help from voluntary wedding videographers, photographers, drones and charity shops, as well as the exclusive McElhinney Bridal Rooms, as well as brides lending their gúnaí or even donning their own gúnaí (myself included!) many decades later.

“We even have half a dozen brides, and their stories, who got married here in Donegal over the last 3 months. I have no doubt it will lift the spirits of all the brides who had to change their plans, those who still are to be wed, and those of us that forget we ever were brides in the first place!”