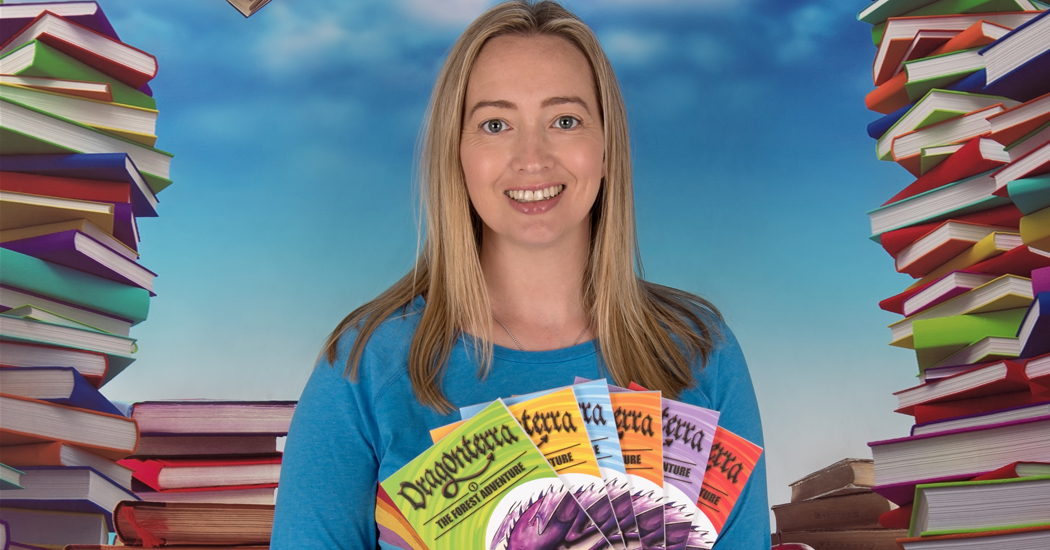 A Letterkenny teacher turned her lockdown downtime into something magical by writing a new children’s book series.

Mum of three Louise Flanagan never planned to write children’s books, but thanks to her daughter’s encouragement, she now has her name on not one, but six books.

The inspiration came from Lucy, Louise’s eldest child, who adores fantasy books. Louise noticed that most of her favourite books were heavily orientated towards girls, with stories about fairies and pink glittery covers. Louise saw a need for more a gender-neutral series. Her mum Mary helped her find the perfect solution – write the series herself!

“From a parent’s perspective, when you are investing financially in toys, and you’ve got both boys and girls in the house, it makes more financial sense if both your sons and daughters could read the same books,” Louise told Donegal Woman.

Louise’s love of language was already there. She is a teacher of English and French at Loreto Letterkenny and has a degree in English and French. The first strict lockdown gave Louise the opportunity to start typing, and the story soon became a hit in her household.

Lucy devoured Dragonterra and enjoyed it so much that she asked for prints for her friend to enjoy the tales of wizards and dragons.

“I wrote them solely for my own children to enjoy, but she was so disappointed to hear me say no. It dawned on me that other children might want to read them too,” Louise recalled.

Louise enlisted the help of her uncle Paul Martin, a graphic designer, and Megan Armitage, an artist, actor and musician, to begin the publishing adventure.

Megan took on the mammoth task of creating hundreds of illustrations for the books. This was an important part of Louise’s vision.

“That was something that drew me to stories as a child myself, I would open the book to see the pictures instead of reading the blurb at the back. With Megan’s help, the finished product is really beautiful and I’m so glad I did pursue it,” Louise said.

“It’s one of those things, as adults we often talk ourselves out of things, we look at the potential difficulties, the reasons why not more than if we pursue the ideas that we have with a positive sense.”

Her three children – Lucy (aged 7), Evan ( 5) and Conor (3) – all get characters named after them and there are many Donegal references that families at home and abroad will enjoy. Louise has shipped books to 19 counties already, with sales also coming in from the US, UK, France and Spain.

Since publishing Dragonterra last week, Louise has been delighted to hear that children of all ages are enjoying them.

“I wrote them with Lucy in mind, for a newly independent reader to read them themselves. They are pitched at the literacy level of a seven year old, but I’m delighted to hear that 9-10 year olds really enjoyed it too. Parents have said their kids are staying up late at night to finish them. For younger children, a lot of parents have bought them to read to their five or six year olds,” Louise explained.

After a year of writing and perfecting the series, Louise is glad she took that leap of faith.

“As soon as people gave their positive feedback I felt proud. It’s something positive that has come out of lockdown and it definitely got me through it.”

Louise is also an admin of the hugely popular Letterkenny Babies Facebook page and has received super support from its followers too, for which she is very grateful.

Dragonterra is available to buy as a six-book pack at €29.99, which includes free delivery throughout Ireland and the UK. Buy online at Dragonterra.ie or buy locally at: