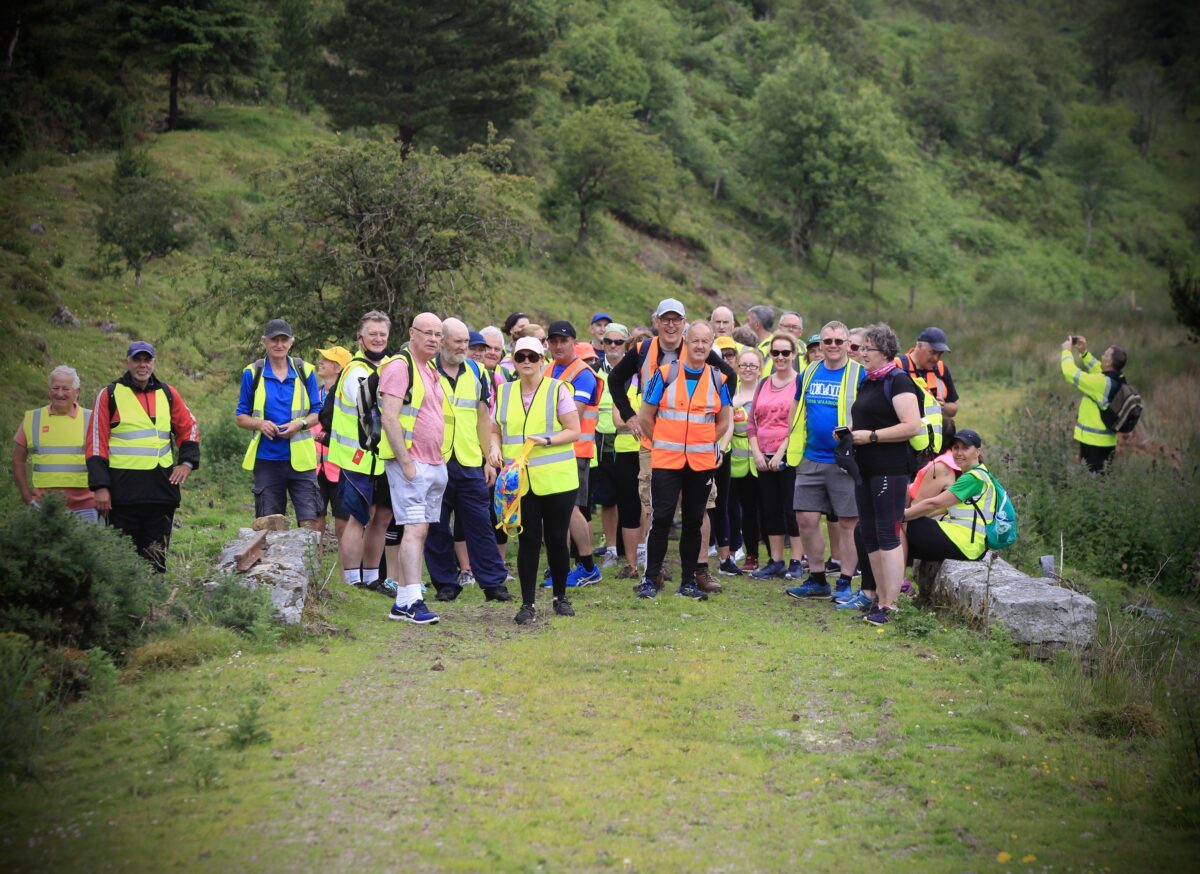 KATHLEEN Doyle, representing all the families including her own grandfather, along with Ben McFadden were the driving force as they unveiled a very special memorial to remember all who lost their lives in the Owencarrow viaduct rail disaster.

A a special service took place overlooking the site near Cresslough where stories of sadness and bravery were shared.

Our journey to the viaduct started last Saturday morning when our columnist met up with walkers walking the route of the old railway from Letterkenny to Burtonport.

I could hear them before I could see them, small bursts of laughter carried along the natural cutting into the hillside.

Then I could see the snake-like line following the leader through the rushes and as they carefully opened the barb wire gate they made the shape of a train as they proudly brought the old Lough Swilly Railway route back to life.

This part of the walk was all possible thanks to the good will of a few landowners and one of the organisers in the fundraising railway walk between Letterkenny and Burtonport. 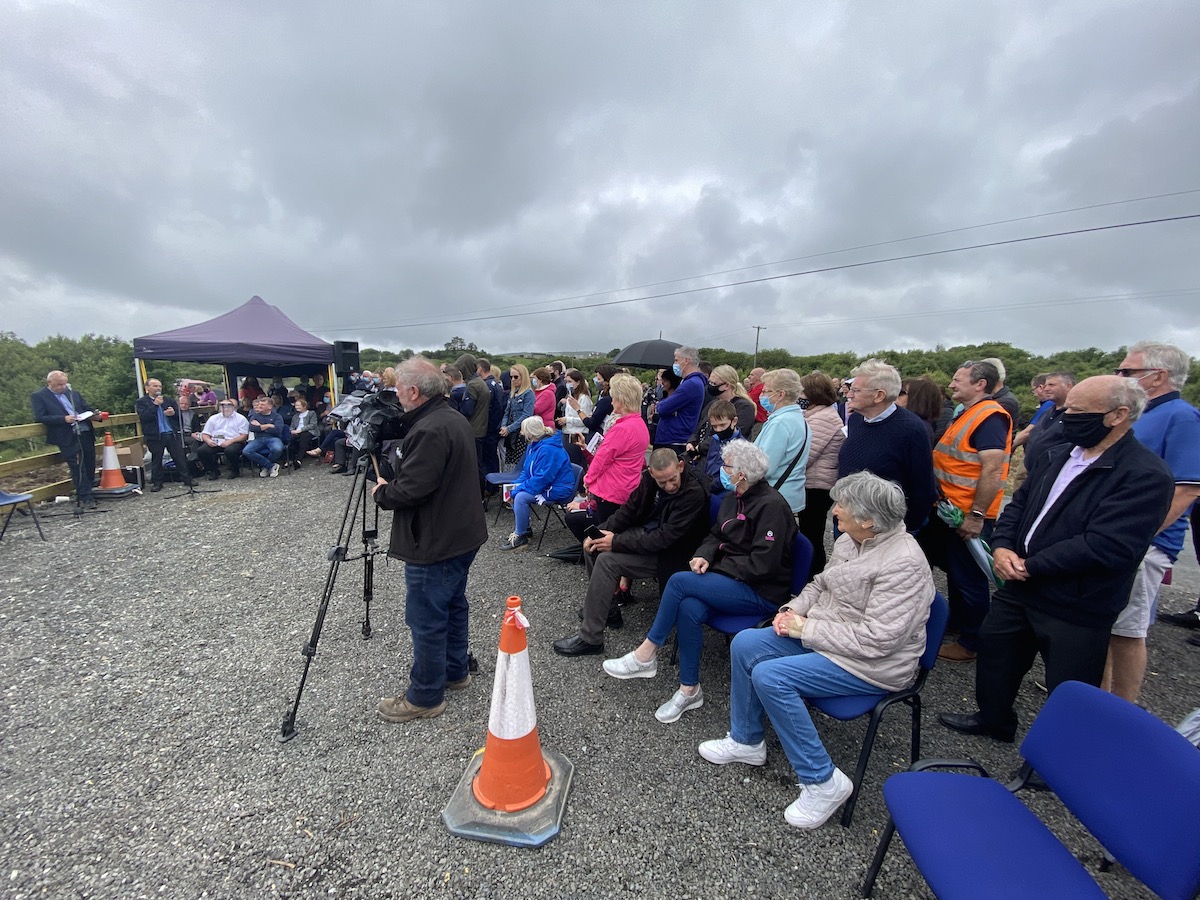 It was 1947 when the last train ran on the final journey before the line closed for good.

After a bit of general coaxing Denis Sheridan one of organisers was coaxed up onto an old crusher to give a talk on the area.

He was the man wo went to the landowners a few weeks ago to see if it would be ok for them to walk through their land where once the railway went. Denis took time to strip some of the longer patch of grass and scrub between gatehouse number 4 and 5  thirty-five and one-quarter and thirty-six miles respectively from Pennyburn Station in Derry.

Standing high above was once was the permanent way of the Lough Swilly Railway. Denis talked about the people that lived along the line in the gatehouses in the years when the line was running and how years after generations of the family are still there , he talked about how  one farmer who made a home made zip wire to transport turf he cut at the top of the hill that was transported across the valley right in the shed door in the other hillside. 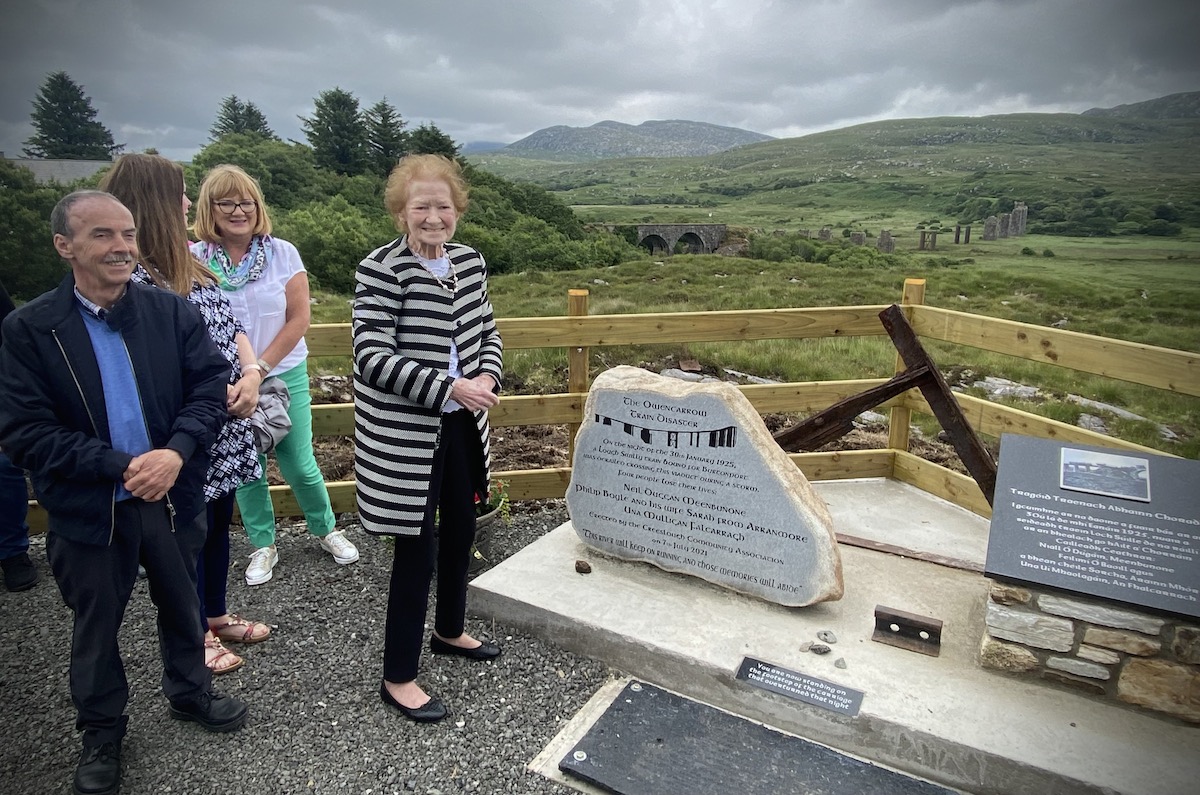 A group of 50 walkers were like pioneers arriving in a forgotten land as the applause at the end of Denise’s speech bounced back at them from the facing hillside.

Eight years ago years ago me and my brother Cathal walked this section parallel to the line on the road above on a very wet Sunday afternoon. Looking down there on that wet miserable Sunday in December it still looked beautiful and it was a place I always hoped one day I’d get to visit and experience one of the hidden beautiful parts of Donegal’s railways.

It was a brief but beautiful stop and it wasn’t long until they were on their feet and on the old track again fuelled up by the place and the stories they discovered.the group posed for a group photo on the old discussed bridge before them moved they moved on down the line.

I was nearly expecting to hear the group whistling The Bridge On The River Kwai tune as the group proudly marched over one of Lough Swilly Railway bridges beautifully made possible out of the stone from the hill.

Denis proudly acted as guards man at the back of the train making sure the gates were closed and secured as the group departed the area and headed in their onward journey,

The journey finished for that day at an Craoibhin community centre in Termon.

Today, Wednesday, the group was going from one of the most hidden parts of the old railway to the most famous and tragic pass over the Owencarrow viaduct.

It was the sight that Donegal railways were to suffer its biggest loss of life the night the part of the train was blown off the track high up on the viaduct in a raging storm.

The lonely pillars of the viaduct lined up across the valley have always reminded me of the bleakness of what it might have been on that winter night in January nearly 100 years ago. 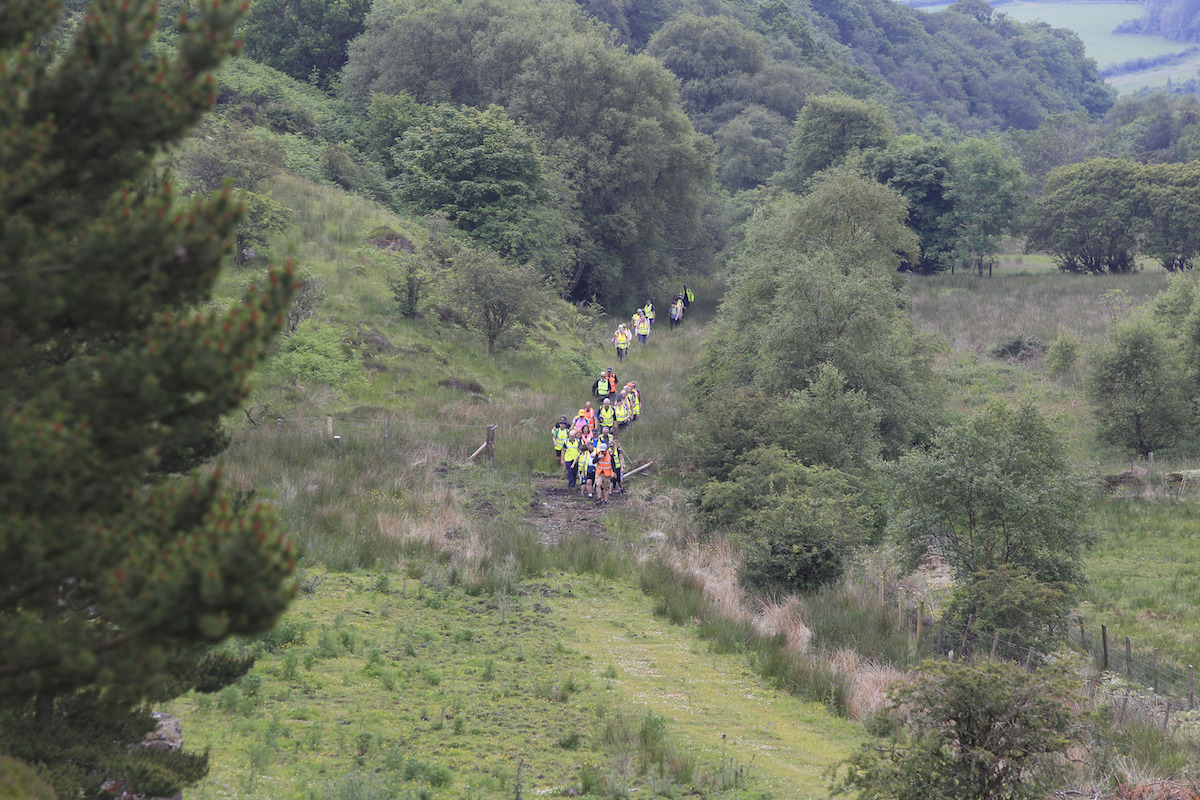 Walkers on a secluded part of the old railway track trace the route of the LoughSwilly railway on Saturday near Trentagh. Photo Brian McDaid.

Local man Ben McFadden and the community around this area set to work earlier this year to start work on a monument that overlooks the site where the tragedy happened, cut out of stone found in the bog from the old structure which was unveiled to remember those who lost their lives  that night and  coincided with the walk of the railway coming through on their journey today.

It’s such an important thing to do to keep the memories alive of those who perished in that horrific night and it is a beautiful place to come to and park up at any time and read the names of those that perished in the tragedy that night.

On a lighter note was a story of a young lad who had learned the ways of a gatehouse child how to double your money thanks to the railway.

If they were lucky enough to get a half penny of a ha’penny as it was known they would place it on the rail before the train would arrive some of the engines of the trains weighed up to up to 30 of 40 times and the steel wheels running out over copper coins on the track would flatten the small coin and increase its size in diameter out to the size of the bigger and more valuable penny which was brought to a nearby shop with the hope it would not be noticed and double the amount of sweets were purchased.

A story told to me back in 2013 I was able to share the story with the walkers in their journey through here and as luck has it I came across one of these old flattened half pennies in an old collection that belonged to my uncle Miah Deeney. 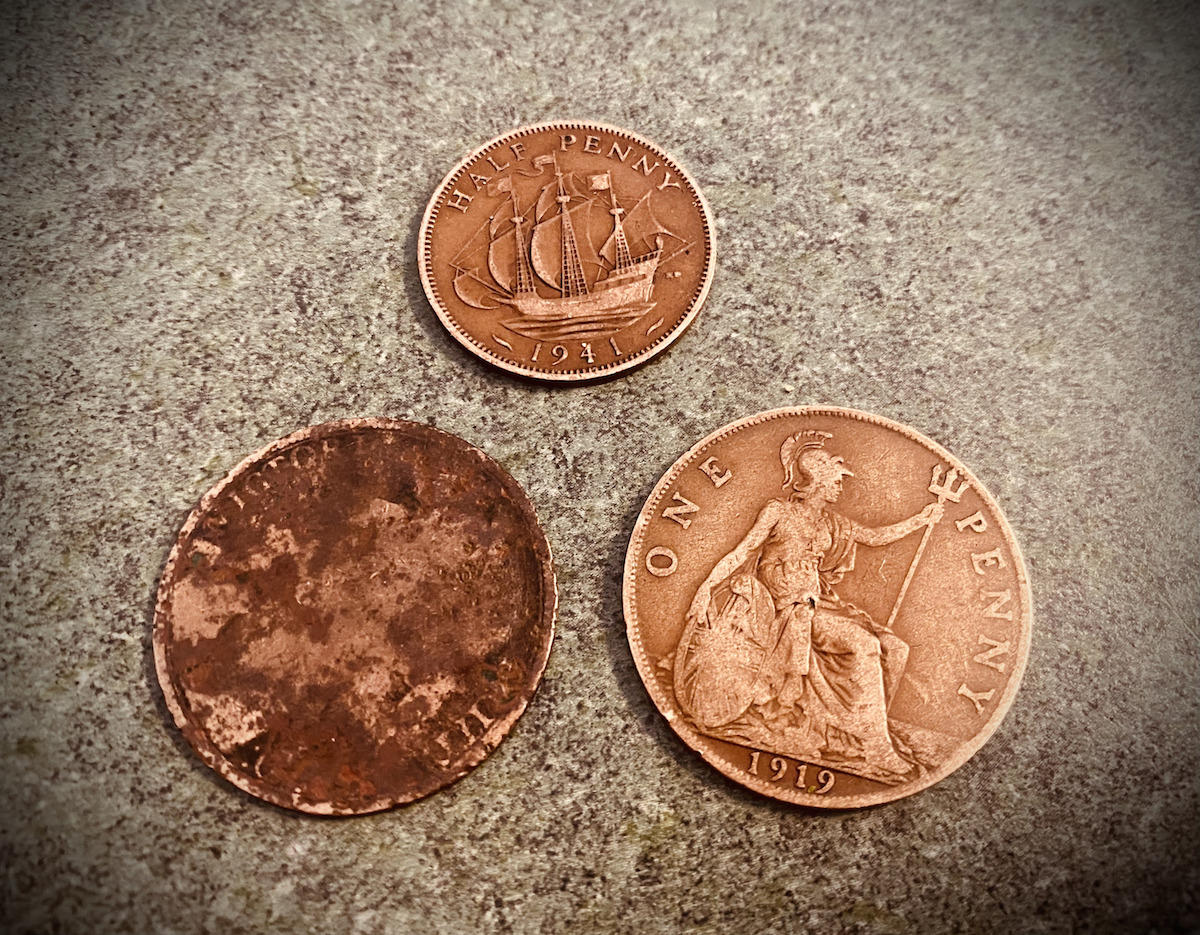 A view of a flattened out ha-penny flatten out to the size of a penny when placed on top the railway line before the train passed over in the days of the train in Donegal. Photo Brian McDaid.

Miah, the son of a train driver, lived for a while at the end of the line in Burtonport his father James Deeney was one of the train drivers on the Derry to Burtonport line.

His son Miah collected old coins over his life time in a glass jar most of his collection show the dates but this one is like none other in among his collection.

At first you might think it’s some sort of a ancient coin but a closer look at how thin it is you soon realise that this coin started life as a ha-penny but was modified by someone along their railway and the only stamp it has is that of the wheels of the Letterkenny to Burtonport train as it passed over it on it journey all the years ago.

members of the walkers group represented by Charlie Boyle and Denis Sheridan presented the old flattened ha-penny to Ben McFadden on their journey through on Wednesday morning.