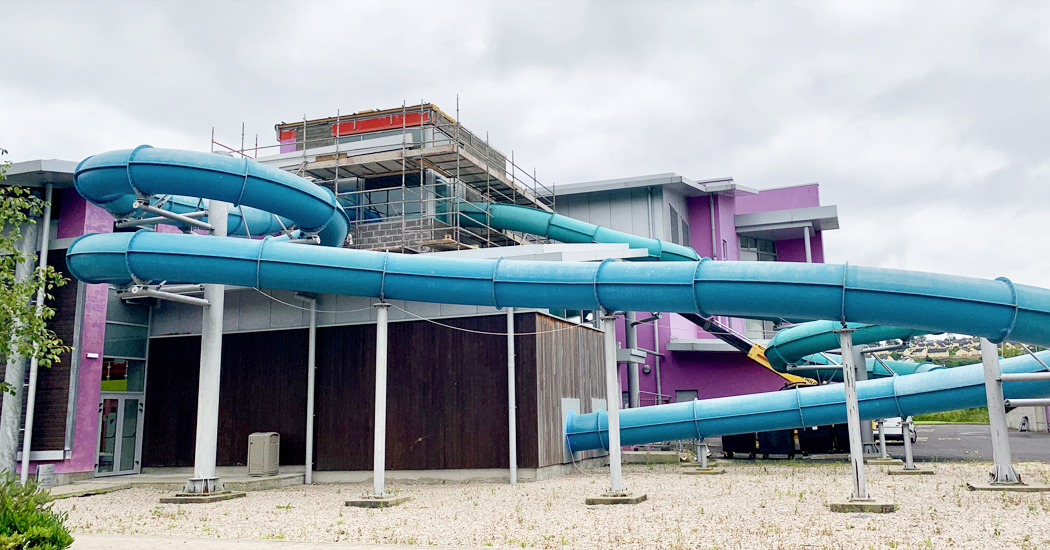 Aura Centre ‘safe’ as full report on the way

External construction engineers have been assigned to carry out a full assessment on Letterkenny’s Aura Leisure Centre.

A report is due on the building next week following unconfirmed reports of the presence of Mica.

Donegal County Council officials said that they believe it is safe to use the centre.

“Otherwise we wouldn’t have it open to the public and we wouldn’t be using it,” Mr Michael McGarvey Director of Water & Environment told today’s special meeting on Mica.

Cracking was first noticed at the complex in early 2020. It deteriorated to the point that work was deemed necessary on the flume tower, where the children’s water slide is situated.

The block around the cracking was of “poor structure quality” and deemed not to be fit for purpose and a risk. A decision was made to remove all the block of the outer leaf.

Mr McGarvey told council members that there was no risk to the tower structure collapsing, but there was a was a risk of the block becoming loose.

The structure is formed from a cavity wall. The inner wall is a reinforced concrete structural shaft, with a rigid cavity insulation and an outer 100m block wall.

The defective block was taken out and reconstructed as a matter of urgency.

“A further visual inspection of the exterior of the centre did not reveal any issues of concern or particularly significant cracking,” Mr McGarvey said.

“We have engaged with an approved construction engineering firm to conduct a full report on block work and to advise the council on appropriate actions going forward.”

Mr McGarvey said that the internal blocks are fair face blocks which show no evidence of cracking and are not suspected of being from the same source.

“There are single story storage areas near the flume tower and there is some visible cracking. There is potential for further deterioration we will be carrying out further tests on that.”

Concerns were raised over the building at last week’s Council AGM, at which Cllr Frank McBrearty queried why the council chose to host meetings there.

In response, Mr McGarvey said: “We believe it is safe to use the centre, we have assessed that, we have engaged external construction engineers to do a full report.

“That is our position at the minute, otherwise we wouldn’t have it open to the public and we wouldn’t be using it if we didn’t deem it to be fit.”