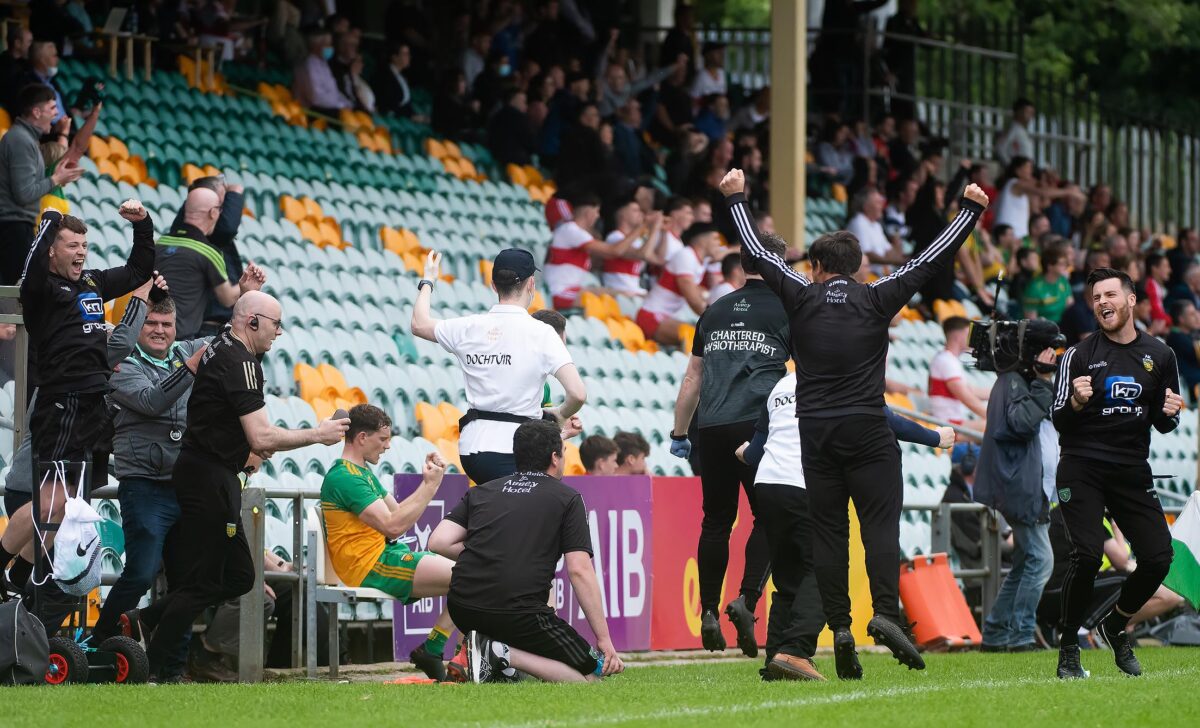 ONWARD, then, to Enniskillen and the latest instalment of Donegal versus Tyrone.

After refusing to blink in a game of chess at MacCumhaill Park yesterday, when Patrick McBrearty checked Derry, Donegal have a familiar foe in the long grass.

McBrearty’s late winner, four minutes into added time, saw Donegal prevailed. But only just. Rory Gallagher, the former Donegal manager and coach, was left to rue one that really got away.

Donegal have little time to rummage through the 0-16 to 0-15 win with Tyrone in wait. From the frying pan to the fire, you could say.

Michael Murphy was left off the Donegal XV yesterday, but the captain was called into battle 11 minutes into the second half.

Murphy’s hamstring injury, which forced him out of the action in last month’s win over Down, meant that he was unable to start, but the captain’s presence was needed with Derry in front by three.

“We were always going to look at getting him game time,” Declan Bonner, the Donegal manager, said.

“He has to get back on the pitch and play g again to get sharpened up. We’re delighted that he came through today and he’ll be ready for next week.

“Listen, he was passed fit for the Down game and he came out after 30 minutes, so we got another 30 minutes into him today and that was important for us to be quite honest. It’s one thing saying it, he’s got to get football, he’s got to get back in and so we’re delighted that he got through that game. He’s come through it well.”

Peadar Mogan was absent from the squad after sustaining an injury at training on Thursday night. The St Naul’s man will be assessed this week, as will Stephen McMenamin and Ciaran Thompson, both withdrawn in the second half.

McBrearty put Donegal ahead for the first time when he tucked over a free in stoppage time.

Derry briefly drew level before the Kilcar man landed a magical winner from the stand side. Derry had a late go, but Donegal held firm, keeping the Oak Leaf at bay, not offering a chance to shoot and maintaining their discipline so as not to give their visitors a lifeline.

“In that period of time they held the ball for maybe two minutes and our discipline was very good, and our focus was completely 100 per cent,” Bonner said.

“We didn’t want to give them an easy shot and we didn’t want to commit a foul, and it was important to put the pressure on and the clock was going against Derry. But it was a titanic battle to be quite honest from start to finish and we’re happy we’re in the semi-final.”

Among the 500 spectators allowed into MacCumhaill Park were Tyrone managers Feargal Logan and Brian Dooher.

Sunday’s game at Brewster Park will be their tenth Championship tussle since 2011, with Donegal winning six of the last nine.

Bonner said: “They’ll probably be saying that they’re going to be favourites going into this championship match next weekend. Not us – Tyrone will be favourites.”