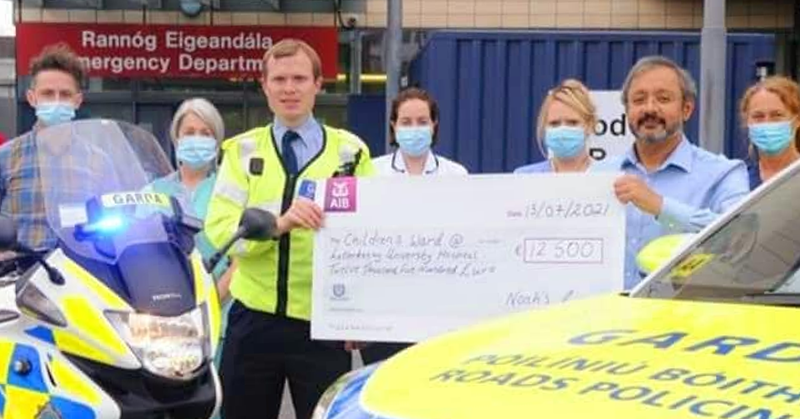 Garda goes the extra mile to raise €12,500 for children’s ward

A Letterkenny garda has raised an amazing €12,500 from a charity run inspired by a very special boy.

Garda Paddy Ryan of the Roads Policing Unit in Letterkenny took to the roads in May to run 161km over the space of seven days. That’s more than a half marathon every day.

The inspiration behind the fundraiser came from brave young Noah Gooch who is fighting Leukaemia.

Noah’s story captured the hearts of the county, and Garda Ryan wanted to do something to make hospital stays more comfortable for all patients at the Paediatric Ward in Letterkenny.

Thanks to his efforts, the hospital can buy items such as: commodes for children who are having to use those designed for adults; improve waiting rooms and play areas to make them more appealing to young patients; and  purchase universal remote controls for TVs and other items to make the young patients’ lives more comfortable during their stay in the ward.

After presenting a cheque to the ward, Garda Ryan wished to thank each and every person who supported him and this worthy cause in any way.

“A massive thank you also to Noah Gooch who was the inspiration behind the run. We hope that the future holds nothing but good health and happiness for Noah and his family!,” said a garda spokesperson.