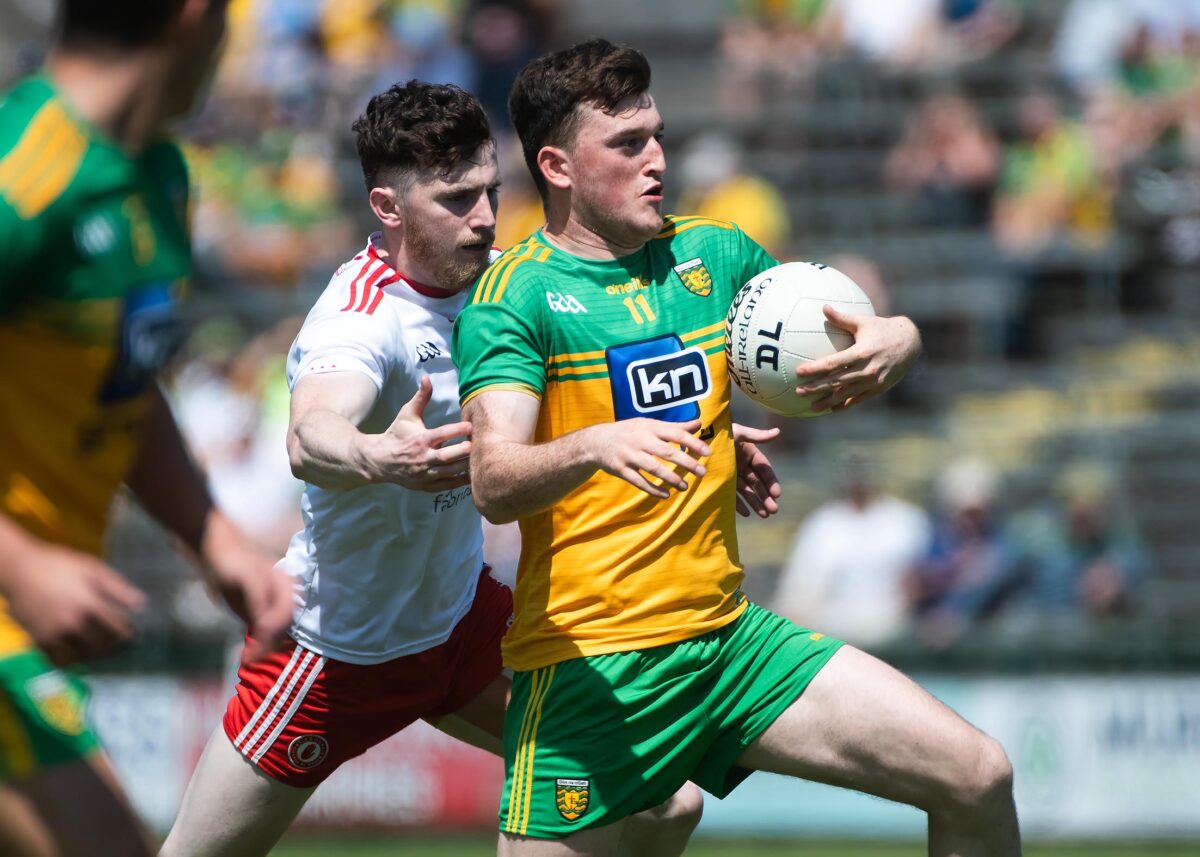 ON THE weekend when summer seemed to start, Donegal’s was ended.

By Chris McNulty at Brewster Park. Pictures by Evan Logan

For long spells, Donegal – who had Michael Murphy sent off not long after the captain missed a 28th minute penalty – were well within reach of a place in the Ulster final, but Tyrone held them off to win with six to spare in the end. There hadn’t been more than three between them until Tyrone hit the game’s final five points.

The backdoor is locked and in the sink-or-swim waters, it’s Tyrone who stay afloat for another fortnight.

Aided by a Caolan McGonagle goal five minutes into the second half, Donegal were just a point in arrears with ten minutes to go

The sun hasn’t been as high in 2021, though it’s not as if the mercury needed any help in rising when these two collide.

Donegal were 0-7 to 0-5 in front, courtesy of a long-range Murphy free, when things seemed to unravel. 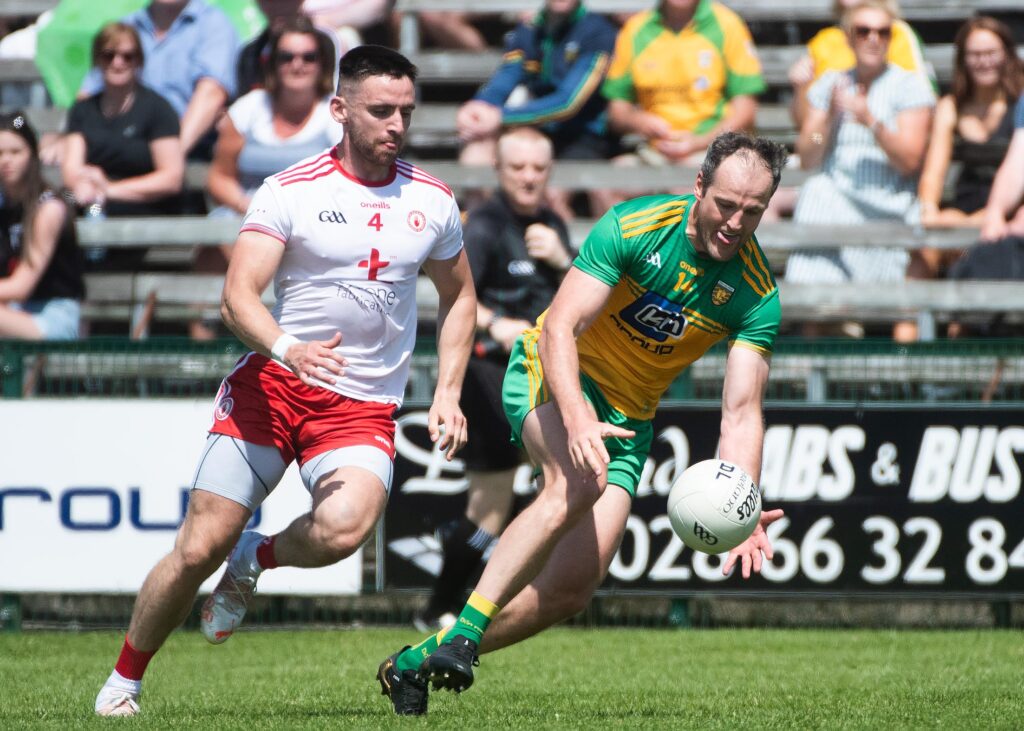 Donegal were given a big chance to open a five-point lead when Rory Brennan – black carded for the offence – fouled Ciaran Thompson. Referee Joe McQuillan deemed it a goal-scoring chance, but Murphy’s penalty flicked off the outside of the post and wide.

In between times, Tyrone moved level with McGeary, right after Murphy’s penalty miss, and Darren McCurry, on target.

Donegal might be entitled to feel aggrieved that Frank Burns went unpunished for a foul on Michael Langan before half-time – an incident that ought to have resulted in a second Donegal penalty.

Kept in reserve last weekend until his second-half introduction to turn the tide against Derry, Murphy took his place from the start.

The Donegal captain’s hamstring has been an ongoing point of debate over the last two months, but he led his troops to the trenches. His day ended and he was left to watch in agony as Donegal’s campaign was brought to a close. 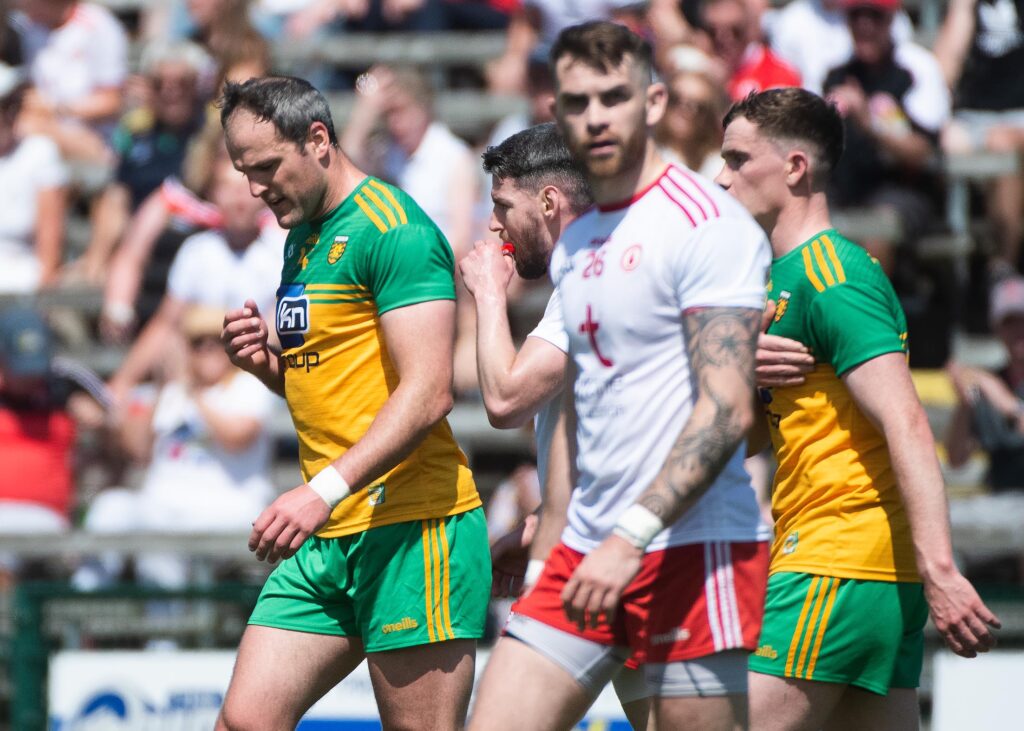 McCurry’s free, with the last kick of the first half, had Tyrone ahead by the minimum, 0-9 to 0-8, at half-time.

Donegal had already suffered a major set back in the fifth minute when veteran full-back McGee was forced off.

McGee was caught by a stray boot as he burrowed to win possession only to come off the worst.

The sight of the Gaoth Dobhair defender being helped off by doctor Shane McCool and physiotherapist Cathal Ellis arrived as a body blow.

Donegal were still adjusting to the loss of their record appearance holder when Shaun Patton denied Tyrone the opening goal. Brian Kennedy intercepted Langan’s pass, which was intended for Caolan McGonagle, and the Red Hands broke with purpose. 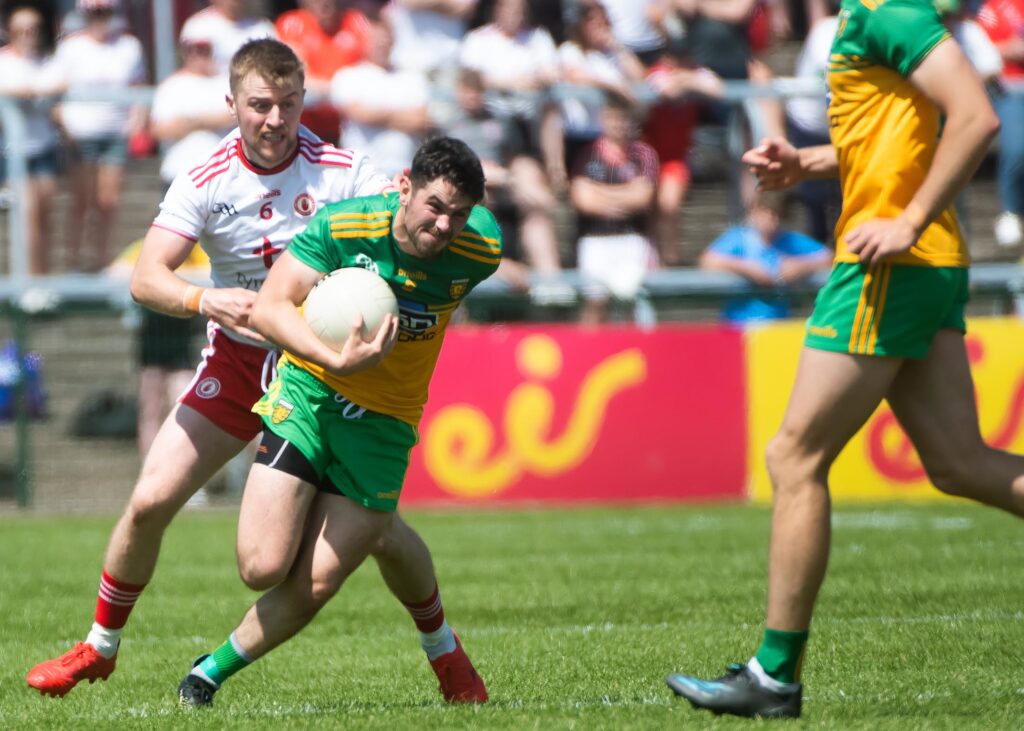 For a brief second, as the ball hung in the air, Tyrone were two-on-one, but McCurry, profiting around the back, was denied by a good save from the Donegal goalkeeper.

Peadar Mogan, returning to the team after being absent from last weekend’s squad due to an injury, boomed over a brilliant point to draw Donegal level.

Murphy’s free had Donegal ahead, but Kieran McGeary fisted over to level it, 0-5 apiece, when they broke for water.

McGeary opened the scoring after just 30 seconds with Jamie Brennan responding in a frenetic start in the Enniskillen oven.

The start of the second half was every bit as intense with McGonagle blasting in a goal for Donegal in the 40th minute.

Quick-fire relies from Mattie Donnelly (2) and Peter Harte cancelled out McGonagle’s strike as Tyrone regained control, but Patton took the sting out of McGeary’s goal chance to keep the tie alive.

Former AFL star Conor McKenna, not long into the action, brought Tyrone level with the teams sharing the scores, Donegal’s 1-4 to Tyrone’s 0-7, in a gripping third quarter.

The clock ticked and Donegal stayed right on the Red Hand tails through a pair of Patrick McBrearty frees.

Tyrone were down to 14 when McGeary was black-carded for a foul on Ciaran Thompson, but Langan’s subsequent free curled wide.

With no second chances, Donegal are left with a long wait until 2022. 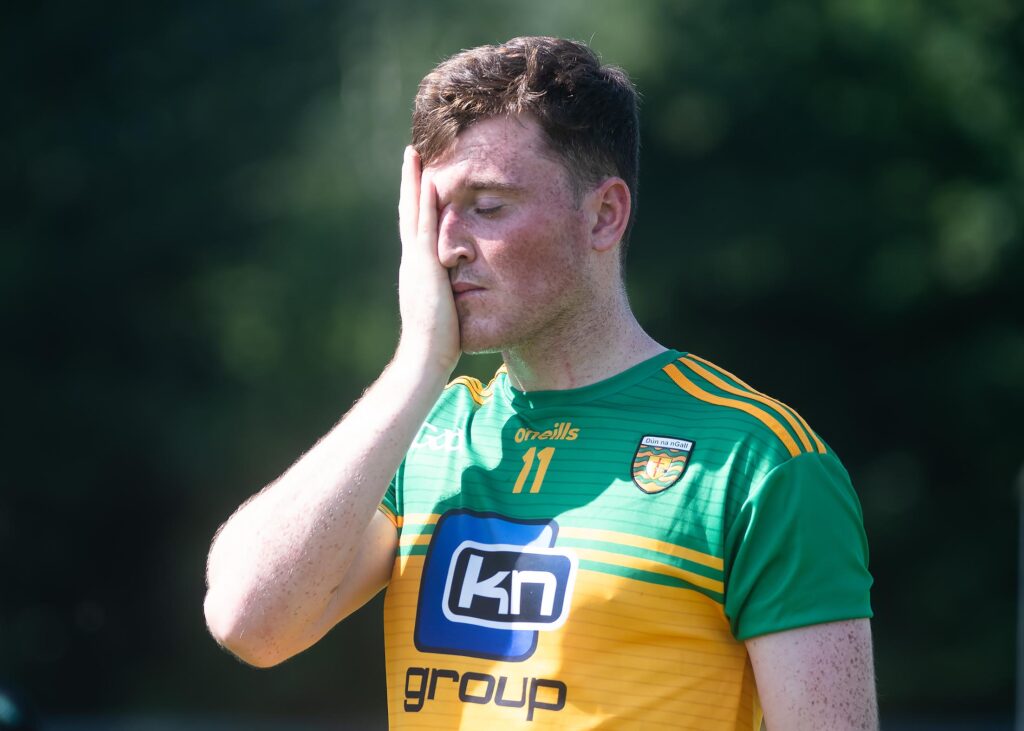