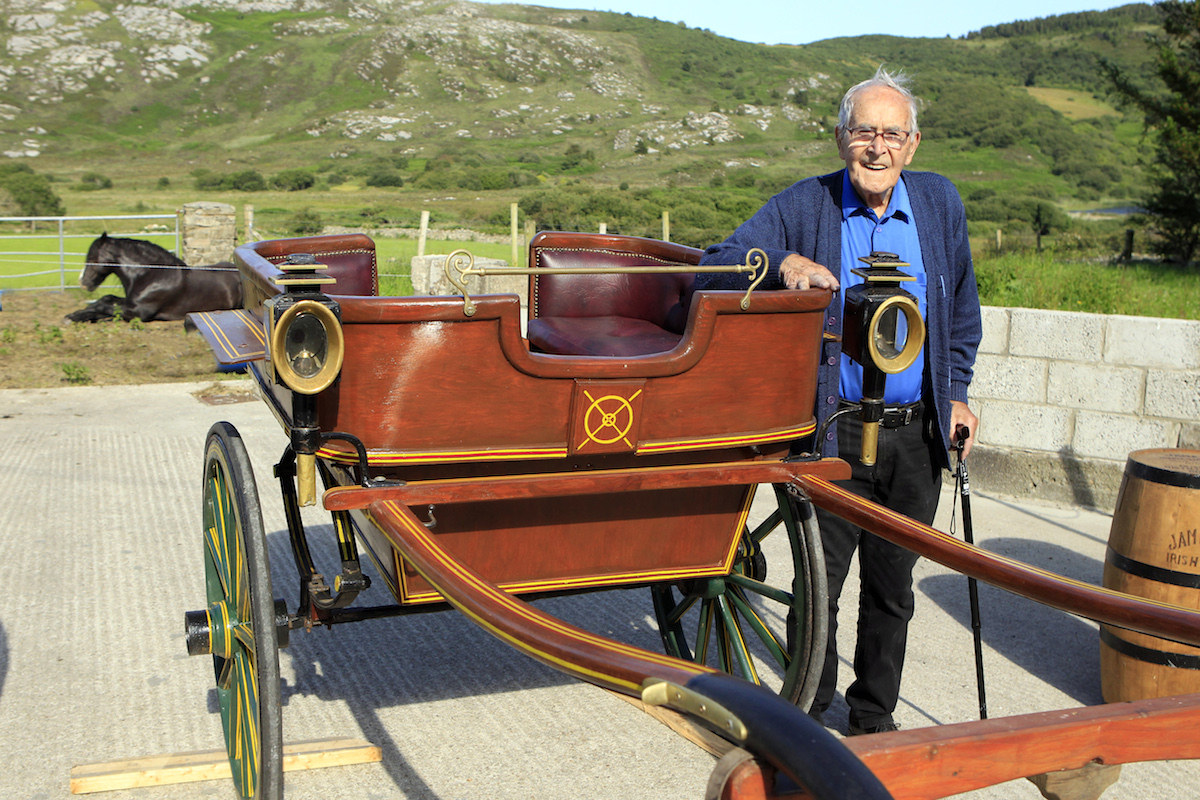 A black horse takes it easy in the background. His name is Beauty but he has competition in the good looks department all around him.

The horse drawn carriages are a throw back to yesteryea,r nearly lost for good if it wasn’t for the person that found them, or bits of them over the years.

You could be forgiven for thinking you were on the film Set for Downton Abbey, when the horse was still the king of the road, candles for headlights, beautiful wooden wheels, curved wood coachwork and shaped shafts that run along the contours of the horse drawing them.

A band of big mature trees have sheltered this home from the westerly winds that blow all the way from the next parish – New York!

Today it’s dappled light filtering through the leaves that are blowing in the gentle breeze at the family home of John Carr in the town land of Glinsk in the Fanad peninsula along the Atlantic Ocean.

The words like ‘can not’ have a lovely ring to them when said with the local accent in this area they’re  softened out to form the word ‘cana’ . Mind you, it’s a word John uses very little and  only in the positive to describe his endless search for old springs, axles, sets of trap shafts.

Three beautiful traps sit on stands in the street high on their wooden wheels balancing on a single leg support with a cross bar for the shaft to rest on. 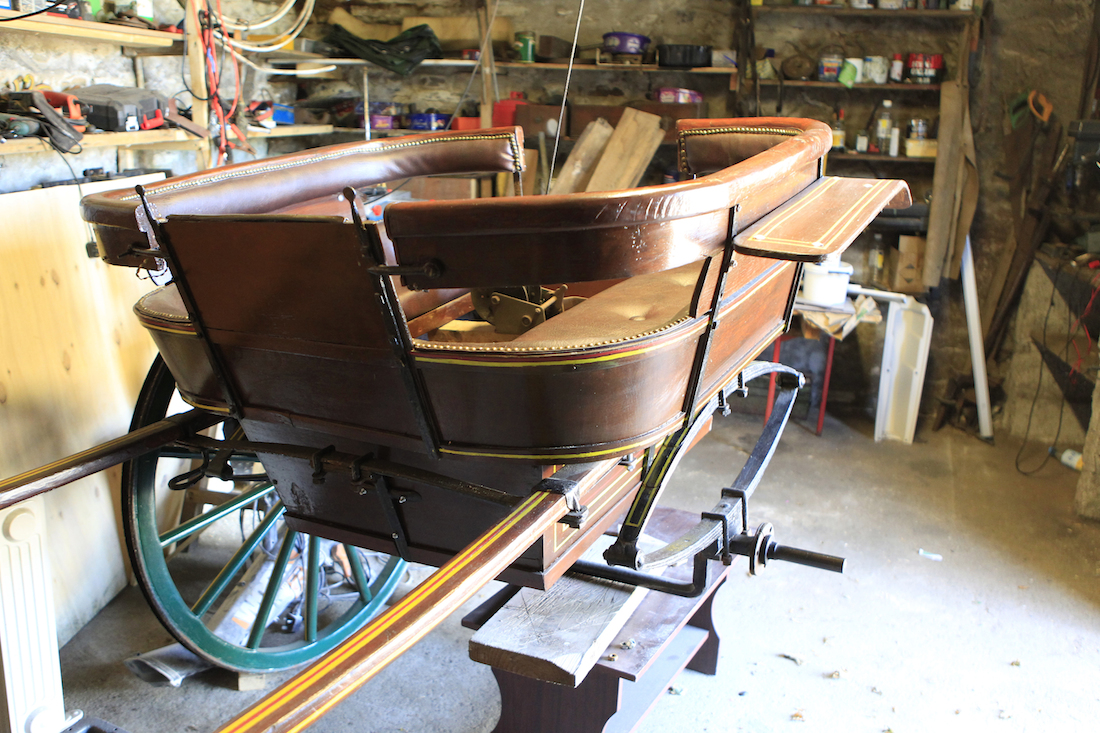 The trap with marking in the axle dating back to 1895 believed to have come for Ballymacool House in Letterkenny.

John made one of these completely from scratch finding an axle here  and set of springs there he made everything that went above that.

He even made the wheels which are a difficult craft in itself with every second wooden spoke offset from the rim so that it keeps the frame true when it is connected to the rim.

John always had an interest in how something was made especially if it was made out of wood. As a child he would watch a neighbour who could make churns for making butter.

The other big memory he had from his childhood was watching his family working with horses ploughing the land using a pair of draft horses.

At 13 years of age he was able to plough with horses himself even though he had to stand up on a box to fit the harness on the horses, looking down to the big field at the front of the house.

John, now in his 95th year, recalled that once was two fields over there was called the lint meadow and over here to the left was the front field. ‘Mme and the boys, (referring to his sons) made that into one big field’. 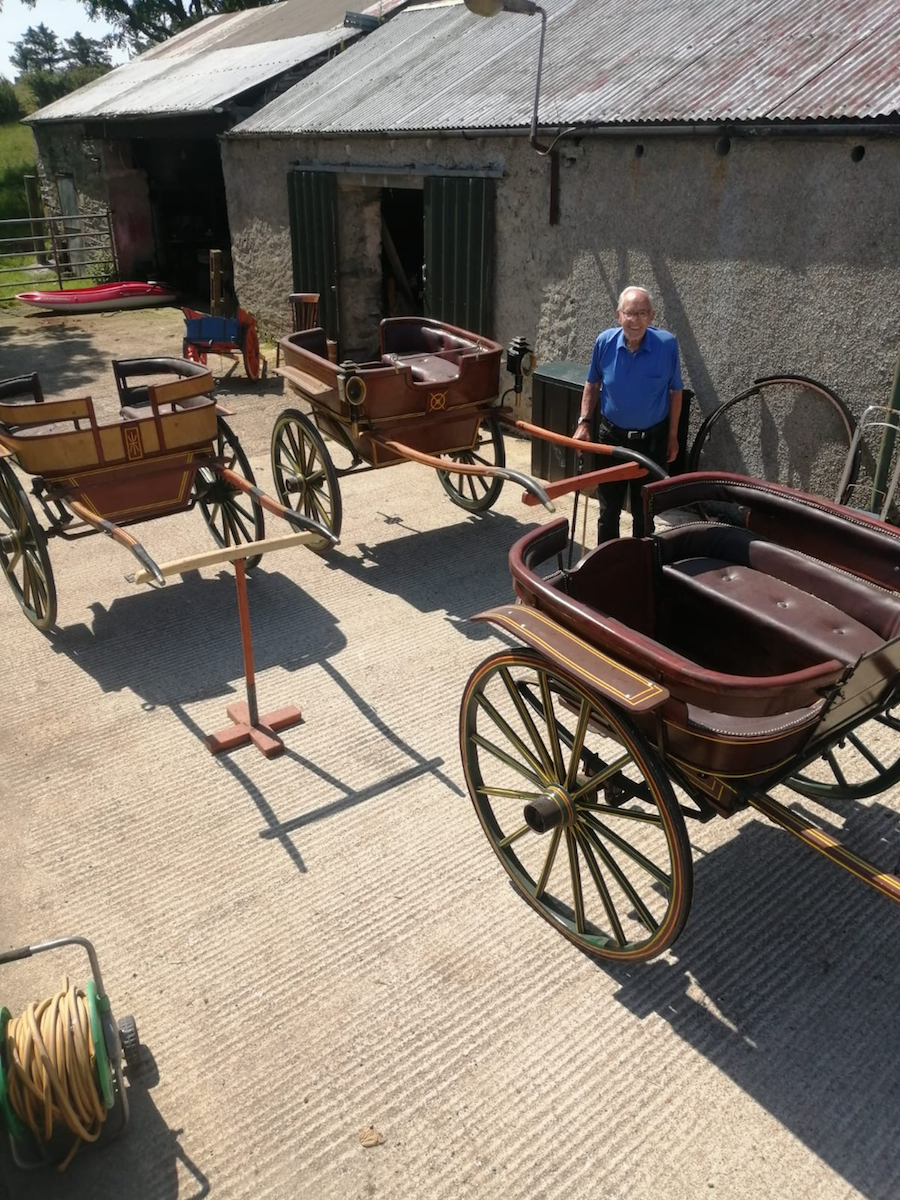 John Carr with the horse drawn traps that he built and restored by him self at his home in Fanad.

He even remembers his home being built up to a two storey house when he was only four years of age. ‘Built with stone, no worries about mica then’, he says

‘Are you alright daddy,’ Martina, his daughter, calls across the yard to us keeping a watchful eye on her father, who in recent times is having bother with his hip but other than a black walking stick that he uses for support, john seems to be able to bypass the pain when he is talking about horses, traps, he even a few old mechanical iron horses as they are called parked up in the shed that he collected over the years.

John left his native Fanad as a young man to work in the tunnels in the  North of Scotland before returning home where off and on he got work with the Donegal.

He rose to the rank of ganger or foreman  and with word of the job of overseer coming up locally, someone suggested to john that he should go for an earlier position in Letterkenny to gain a bit of interview experience.

He went in for that interview for a position in Letterkenny very relaxed and to his surprise he ended up being offered the job in Letterkenny. John set out from Glinsk every morning to work and could end up at the outer reaches of his area in the Fintown area.

John talked about some of the great men he met when he worked with on the Donegal Co. Council, people like the late Eamon Harvey who was a driver for the council, how efficiently Eamon could work be it drawing stone or chips when the pressure would be on to get a job completed. 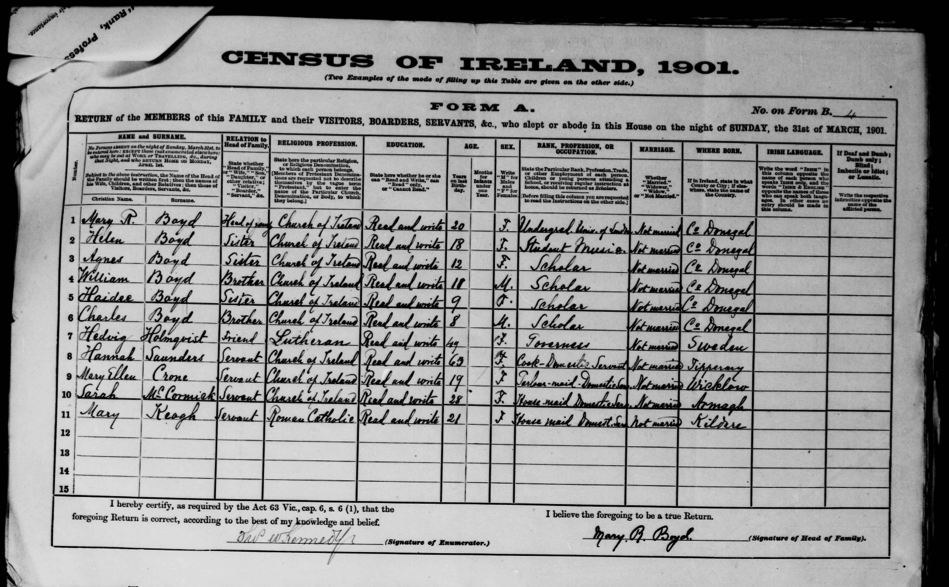 Looking at work in progress, John show me some of the work he did on one of his refurbished traps showing me what was original and showing me what he had to figure out how he could make sections to be replaced, John talked about finding specialist plywood that when boiled in water could be shaped into the beautifully rounded sections of the upper parts of the trap.

Reaching for a piece of sandpaper John cleans back a section of the hub axle of the oldest trap he did work on, with the wheel removed we could see the date 1895 the year the axle was made. When John got it he would be the second person to attempt to restore it.

The previous man did a lot of work stripping back the rotten sections but  lost interest in restoring, John took what bits that were left and whatever wee bit of history on it.

As far as John knew this trap came from Ballymacool House in Letterkenny, found in one of the sheds before the Kelly family left the old estate.

This week the date  on the axle had us smitten and got us searching. These traps were known as Tub Traps because of their looks of shape.

Another name it was known by was what was known as a Governess’ Trap, which would have been used by the governess of a big house like Ballymacool to transport the children in her care on local journeys

As it happens a search of the 1901 census shows that Ballymacool house did have a governess in residence. She was Swedish by the name of Hedrig Holmqrist.

In her care were Agnes 12, William 11 Hiadie 10 and  Charles age 9, their older sisters Helen 18 and Mary R. Boyd 20. All could have being transported by their governess up and down the avenue in Ballymacool and in and out to the town heading to The Four Lanterns or Arena 7 equivalent in the town a century before hand. It thats who and what the trap was built for, there’s a good chance that my own great grandparents John and Bridget Doherty, who were the gatekeepers in Ballymacool, saw this carriage many generations before me over a hundred years ago.

In an era of recyclin,g its full circle like the wheels John made by hand to bring these beautiful pieces of transport history back to their beautiful form, keeping the sets of old springs and trap shafts and waiting for other parts to turn up John Carr’s handy work has preserved history, even the old donkey cart (made in miniature) is a scaled replica of the original familiar sight of what was on the road many years ago.

It was John Ford who directed The Quiet Man, a film starring John Wayne and Maureen O’Hara shot in technicolour in the 1950’s recreated what life was like in Ireland in the early part of the last century and in one of scene the stars of the big screen arrive in a tub trap into an Irish village.

It’s our John Carr wo brought colour back of beautifully built and restored coachwork of these beautiful modes of transport of a bygone age.