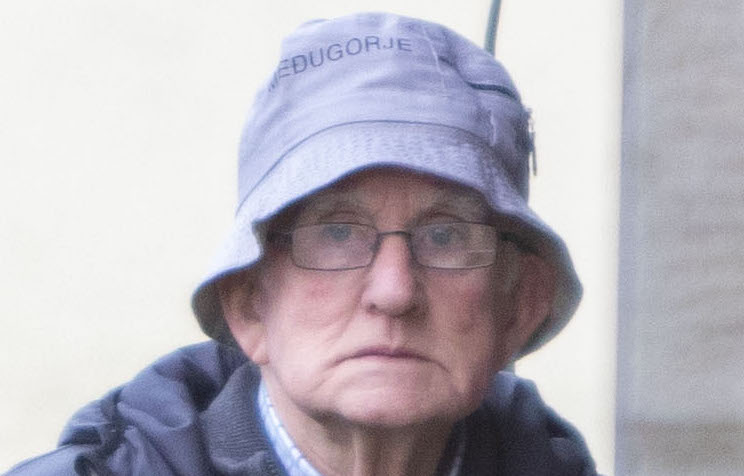 Former Donegal priest Con Cunningham has been jailed for 15 months for the horrific sexual abuse of two young sisters in the Fanad region.

Cunningham, now aged 86, pleaded guilty to eight counts of indecent assaults between 1971 and 1975.

Passing sentence Judge John Aylmer said the abuse had had an appalling impact on the lives of victims Margaret and Paula Martin.

The women, who were aged between 11 and 13 years and 9 and 12 years at the time, waived their right to anonymity to name Cunningham.

The abuse took place at a number of locations in Donegal including at the girls’ home, at the parochial house in Fanavolty in Fanad and also at the Loreto College buildings in

The Martin sisters sat in Letterkenny Circuit Court as their abuser spoke only the word “guilty” when the various charges were put to Cunningham who is now living in a homeless hostel in Dublin and is of frail health.

The court was told that he acknowledged his crimes as far back as 2002.

His admissions coincided with the publication of the Ryan Commission into Child Abuse.

However, evidence given in court revealed how complaints were made against the then priest to then Bishop of Raphoe Seamus Hegarty in 1994.

The priest was sent to the Granada Institute for sex abusers in Dublin but they deemed that Cunningham posed no danger and was allowed to continue his Ministry.

Gardai met with both victims but for various reasons, they were not prepared or able to go ahead with a prosecution.

In 2002 following the Ryan Commission, Gardai received files on allegations against the clergy including that of the two women.

The woman met with the then Bishop of Raphoe Dr Phillip Boyce who gave them the opportunity to address their issues.

Amongst these was the women’s demands was that he have no further access to children and that the Catholic Church pay for counselling needed to cope with the abuse.

The church paid for counselling for one of the women for the counselling she received from 1994 to 1999.

Cunningham was also prevented from saying mass publicly but could say mass in his own private dwelling.

A letter in which the priest admitted his crimes was also shown to the two victims but they were not given a copy of this letter.

It was only in 2020 when Gardai got a search warrant to recover documents from the Bishop’s Palace in Letterkenny that these and other documents were recovered, revealed investigating detective John Gallagher.

Although the woman did not address the court directly, their victim impact statements were read out in court.

The powerful statements recalled in detail the beginning of the abuse and the horrific impact it has had on their lives.

The woman also spoke about how it damaged their spirituality as they had been brought up in the Catholic faith by two loving and caring parents who trusted this priest.

One of the sisters told how the priest abused her when her mother had gone to her grandmother’s wake.

She told how the priest was “like an animal” as he sexually abused her.

On another occasion he made them sit on his lap on an armchair in the parlour of his house and he would abuse them.

One of the women said that when he came to live in their community he became like a great uncle to them and would shower them with sweets, money and tracksuits before the abuse began.

He would eat all his meals in their home and would meet parishioners there and basically “had the run of the house.”

Barrister for the accused, Mr Colm Smyth, SC, instructed by solicitor Frank Dorrian, said his client was in frail health and was now in his mid 80s.

He had asked him to proffer an open and profound apology and to say sorry for the hurt and damage caused by his assaults which were a grievous breach of trust.

He said he had admitted his guilt in 2002 and for the best part of 20 years the case had been hanging over him knowing “this day would come” and suggested this was a mitigating factor.

He also added that if this case had come along with the priest’s previous case of indecent assault which he was jailed for in 2018 then he would not be facing another court case.

He added that since these crimes which took place in the 1970s, he has led a blameless life.

Judge John Aylmer said he placed the cases at the upper end of the scale of such offences which merited a sentence of 20 months in jail before mitigation.

He reduced this to 15 months taking into account his guilty plea, the fact that he pleaded to his crimes as far back as 2002 and has had the case “hanging over him” for that time.

He also made reference to his age, his remorse and also that he was “put out of his Ministry” when he admitted his crimes.