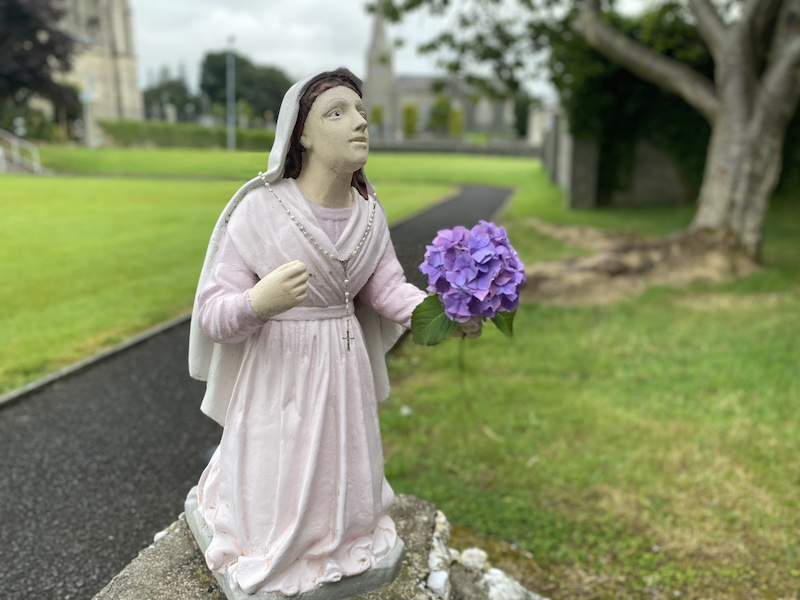 Even writing about hives makes me itchy!

They were the curse of life when I was growing up and the recent heatwave that Donegal experienced brought the memory of them back.

I seem to have had hives constantly for a few years which would be known as chronic hives in my case and were the worst in the summer months.

They say that hives can be caused by a number of different things that you may be allergic to like certain foods, also caused by heat or even stress.

Even sand from the beach on clothing in my case seemed to trigger the hives to reappear.

In those years my Auntie Bida took to looking after me when these hives were the worst trying to do research into what was causing them, something that wasn’t serious enough to stay off school with in those days. 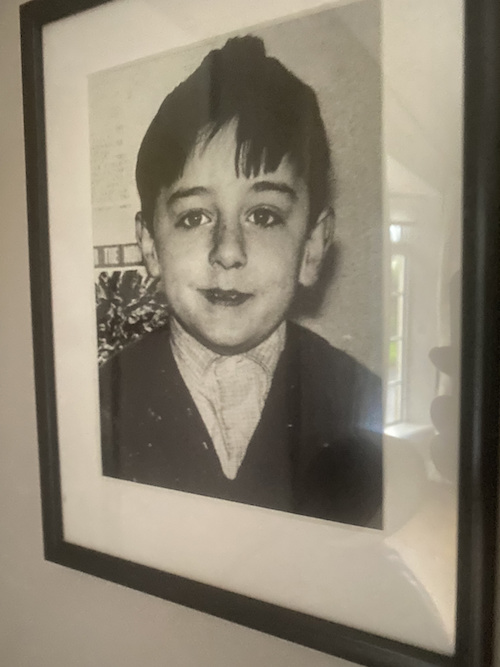 A photo taken in the boys school when I was six buttoned up to the neck to cover the hives.

After school, I would call down to Bida’s home on the Back Road in the evening. I still can remember the smell of Calamine lotion in a pink plastic squeezy bottle. That just took the heat off hives and itchiness out for a very small period of time. I would say if she could have she would have taken my hives and suffered their itchiness herself.

Bida gave up her time to look after others, she gave up her job in the Model Bakery on the High Road to look after her mother also called Bridget when she had a stroke and was confined to a wheelchair and also looked after her father pop in his older years.

Along with that Bida had a cure for sprains passed down to her possibly by her granny Bridget Coyle from Listack, her son, my grandfather had this cure too but Bida had great results with it. It was a piece of string made from flax which was tied around the injured limb and was left on until it fell off itself, not the limb, the string that it, as one person once mistakenly thought Bida meant when she was given someone instructions.

There was no money involved for cures and Bida offered only a lot of prayer on Bida’s part. She had no cure for hives but that didn’t stop Bida trying and praying for me. 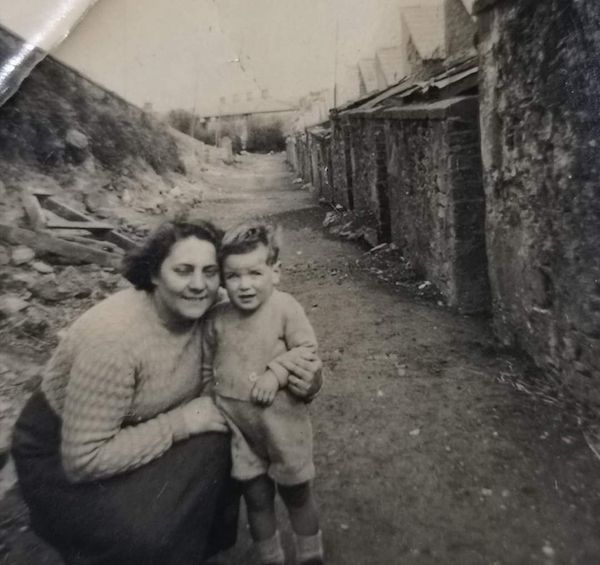 As a child Bida would encourage me to call down to the grotto which was in the grounds of Loreto Convent and say a few prayers after school. That could be tricky enough for a young boy heading out of school in the evening with schoolmates. Some excuse was always made up that you forgot something so you could double back to go into the grotto, say the prayers and be out again before the convent crowd got out. Praying at the grotto was a very quiet place in the middle of Letterkenny.

I’m sure the kneeling phew has been replaced many times in the 50 years since I first visited it, maybe not but a recent visit down there looks so small to the way I remember it. I always said my prayers out loud there not knowing when I was young that it was ok to say them to yourself. I didn’t know God could still hear them when they were said into yourself.

I often wondered if I might have been allergic to prayers maybe, maybe I wasn’t doing it right and then the complete opposite feeling would come to me that I wasn’t praying to the statue high in the grotto, I was praying to my mother in heaven or I was praying to someone that might mention to her that they saw me praying at the grotto. I often thought that the hives were a giveaway to what I was feeling inside feelings I kept to myself. Their eyes on the statue of the girl kneeling at the side were haunting and still haunt me even on recent visits. 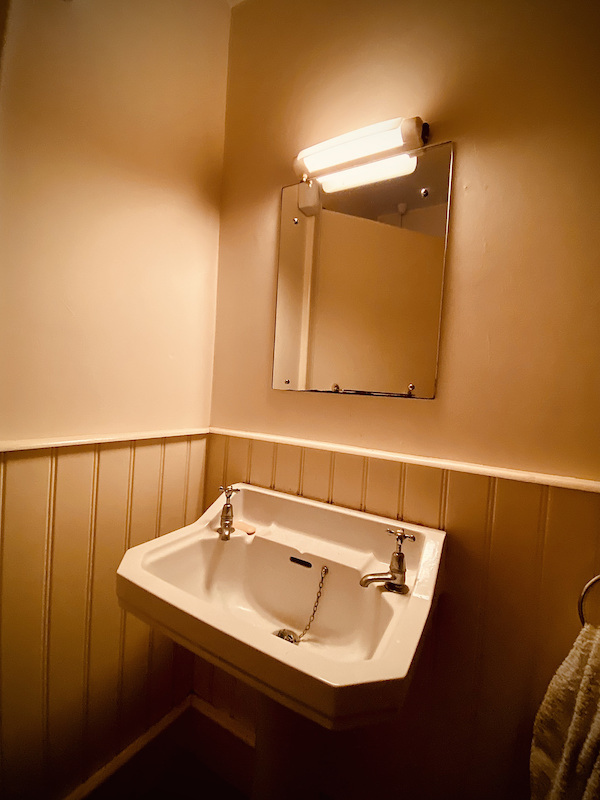 The old light and sink in my granny’s home still the same still with the memories of the past. Photo Brian McDaid.

In the heat of the heatwave last week working in the studio that once was my aunt Bida’s home, I was washing paint off my hands after I had finished working on a frame.

The new light in the toilet also has an extractor fan attached as we closed up the old bathroom window, it’s noisy and you can’t hear customers coming in the front door, so I switched on the old light that was always there above the mirror. It’s old and sometimes doesn’t work when you press the button so I worked away with the light off and the door ajar so I could hear if any customers came into the shop. About a minute after that the light came on itself. It has an old dim soft light from it.

I looked up and caught the reflection of myself. I thought of all the people that lived in this house that looked into that mirror still in the same place that are no longer with us , My grandfather Pop and Granny Coyle, Bida’s husband Miah, Johnny and Fr Mark who all lived in the house when they moved up from the shop at the corner.

But it was Bida that I have the memory of the most always there when you lifted the latch on the back door. There to greet you in the old kitchen which was tiny or in the new extension with the two steps up to it. These two steps have the same attraction to children today that call into the shop with their parents and end up sitting on the steps, the same ones we would sit on watching the telly when we were wains, when this shop was home.

I can remember when I wasn’t tall enough and had to go on tippy toes just to catch my eyes in this mirror right through to when I was too tall and had to stoop down to look into the top of the old mirror. 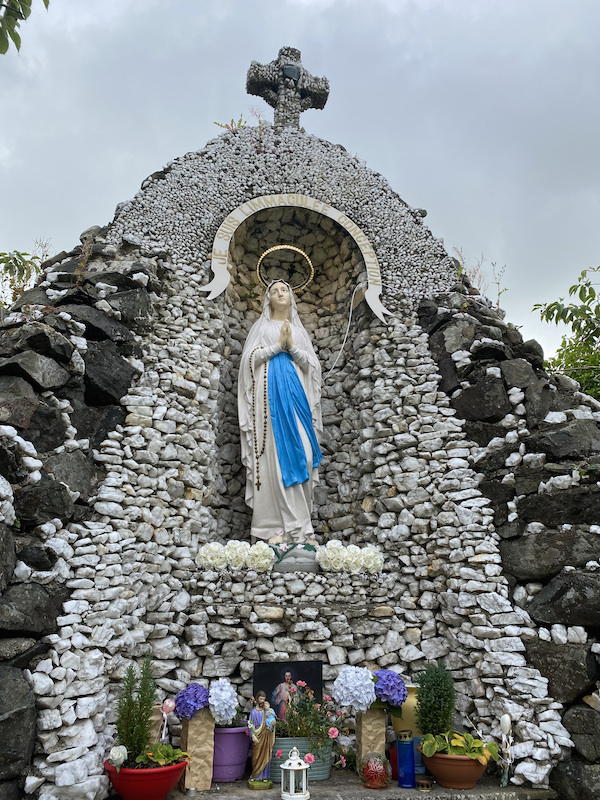 The grotto in letterkenny where I was sent to pray at years ago.

And I remember Bida caring for me when the hives were at their worst. The old light above the mirror pushes shades of memories onto the walls of the old bathroom which is the same as it always did: same sink, same taps, same dint on the back of the door caused when it comes to rest with a soft thud when it wasn’t closed properly.

Hives were an unhappy time, they weren’t contagious but looked bad. I covered them up rather than looking at them, they have long since disappeared except on days like these when I write about them when the thought of them gives me a shiver.