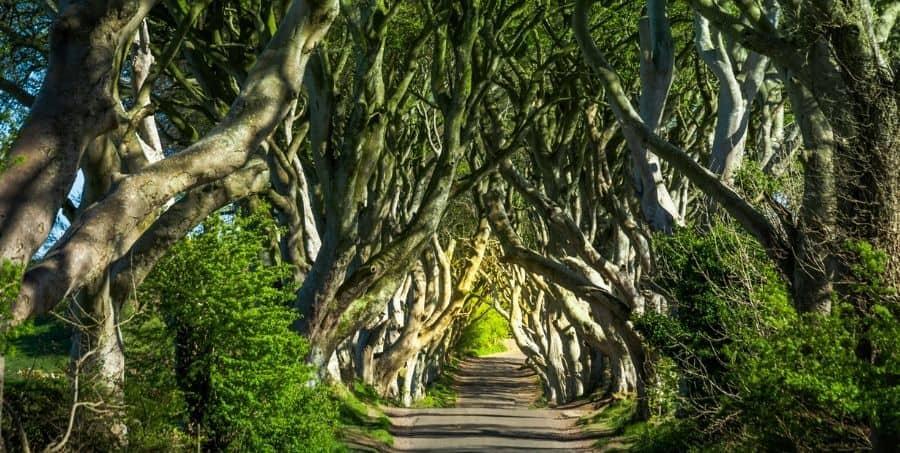 Sometimes you don’t need to venture far to have a true travel experience, some incredible attractions can be found closer to home. Northern Ireland is a fantastic and popular travel destination. Possibly, this new popularity may be in part due to Game of Thrones extensively using Northern Ireland as a filming location. With its vibrant capital, jagged coastlines, historical sites and enchanting landscapes, there’s so much to see; check out our suggestions for the best sights to see in Northern Ireland.

Now that Covid vaccinations have begun to take place, very soon the world will be opening again for some well-deserved travel experiences. Donegal Daily have partnered with Travel Department to share with you the Top 5 places to visit in Northern Ireland.

Before we start, the wonderful team over at Travel Department know how important flexibility is to you now. So, from July 1st to September 30th, 2021, any new bookings made for travel in 2021 can be changed for free or you can swap your deposit for a voucher that has no expiry date. This flexibility is valid right up to when your balance is due. Rest assured you can book with confidence today and give yourself something to look forward to. More information here.

1. Go to the Titanic Experience in Belfast 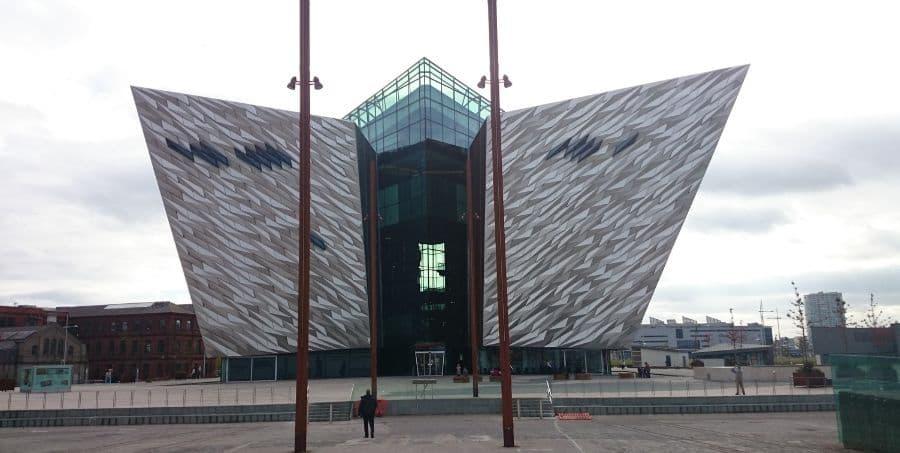 One of the top things to do in Belfast is the Titanic Museum. Many of the passengers, each with their own unique story and background, boarded the Titanic hoping to find an opportunity in America. Sadly, some didn’t get to realise their dream. You can learn about the most famous ship in the world and Belfast’s shipbuilding industry. It’s a self-guided tour with interactive galleries and is an extraordinary way to learn about the ill-fated ocean liner and uncover stories from The Titanic. There are also reconstructions of each class’ accommodation, which gives you an idea of how the passengers lived onboard. This is just one of many activities you can do on a city break in the capital, other top Belfast attractions we recommend seeing are the Albert Memorial Clock, the Botanic Gardens and Belfast Town Hall. To uncover more of the city’s modern history, you can take a Black Taxi Tour and see the iconic Belfast murals. Take a stroll along the River Lagan, where you’ll see a striking statue called The Beacon of Hope on the Queen’s Bridge, it was installed in 2007 and is a symbol for peace and reconciliation. It’s never too early to start thinking about a Christmas break! Belfast at Christmas time has a wonderful festive atmosphere, and you can see the city’s main sights, as well as enjoying some Christmas shopping. 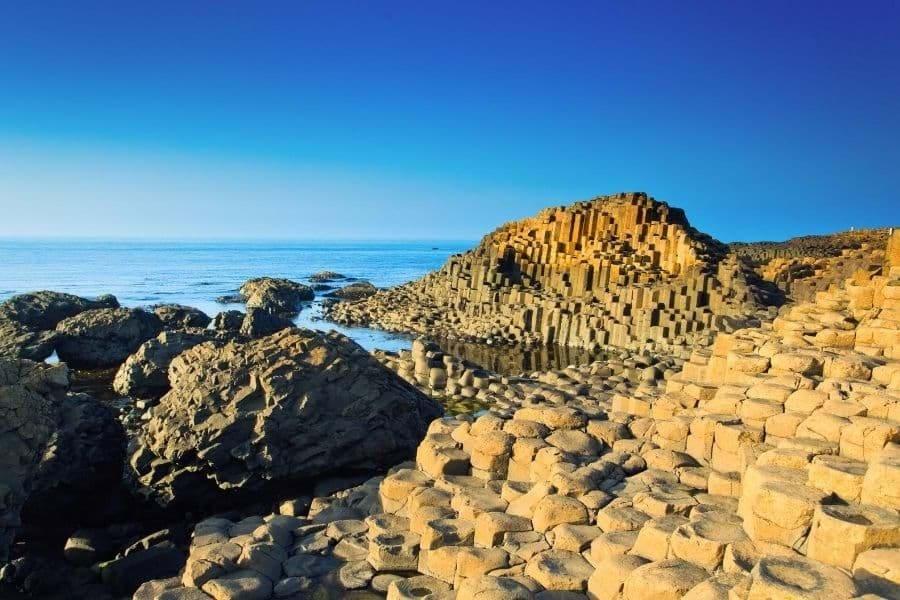 Explore the Antrim Coast and take an excursion to the Giant’s Causeway, Northern Ireland’s only UNESCO Heritage site. Legend has it, the reason why it’s called the Giant’s Causeway is because Finn McCool, an Irish giant, created it to get to Scotland so he could fight against his enemy Benandonner. You can learn more about how these unique hexagonal rocks were formed at the Giant’s Causeway visitor centre. It’s truly a natural phenomenon. And if you have time to whet your appetite, then enjoy a whiskey tasting at Bushmills distillery, which is nearby. 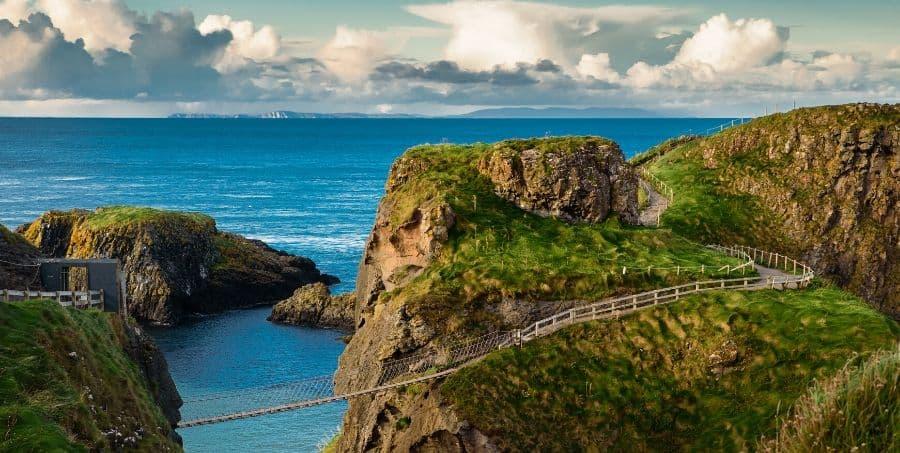 Another iconic Northern Ireland attraction to see is the Carrick-a-Rede Rope Bridge. Nearly 300 years ago the rope bridge, connecting the island of Carrickarede and the mainland of County Antrim, was first erected by fishermen. It’s perfectly safe to walk across the bridge, but it can feel a bit bouncy! When you do cross over, you’ll be rewarded with majestic views of the Causeway Coastal Route. 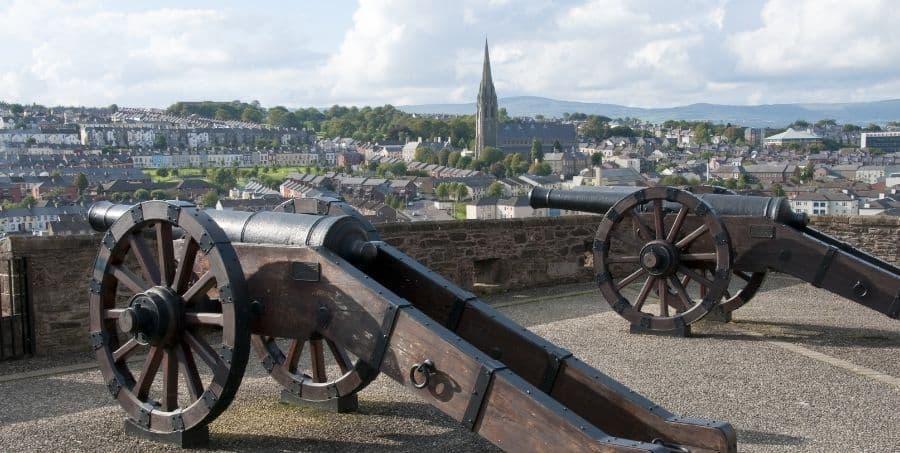 The popular comedy tv series ‘Derry Girls’ has raised the profile of Northern’s Ireand’s second largest city, there’s even a mural dedicated to the cast of the show! The city has an intriguing history and one of the most interesting things to do in Derry or Londonderry, as it’s also known, is to take a walking tour of the old city walls. Approximately 1.5km in circumference and built in the 17th century, this is the only completely walled city found in the whole of Ireland. Dotted throughout the city walls, you’ll find the largest collection of canyons in Europe. It’s also believed that the walls are wider than the Great Wall of China! Another historical landmark of interest that’s nearby the Free Derry Corner in the Bogside neighbourhood. While there are disagreements on what we should call this city, at least we can all agree it’s Legenderry!

This enchanting avenue of beech trees on Bregagh Road in County Antrim is one of the most iconic sights in Northern Ireland. Game of Thrones fans may recognise this from the episode where Arya Stark escapes from Kings Landing after her father is murdered and she disguises herself as a boy. 150 beech trees were planted by James Stewart, around 90 of which remain, in the 18th century to line the entrance to Gracehill House to create a mystical ambience. There is a local legend that at nightime the ‘Grey Lady’ darts from tree to tree. It’s believed to be either the spirit of a housemaid who died in mysterious circumstances or “Cross Peggy”, James Stuart’s daughter.   There are plenty of fun and fascinating things to do in Northern Ireland whatever your interests are. 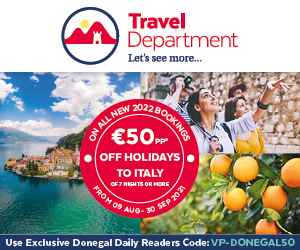 The seven best reasons for taking a...

What Can I Expect On Board A...