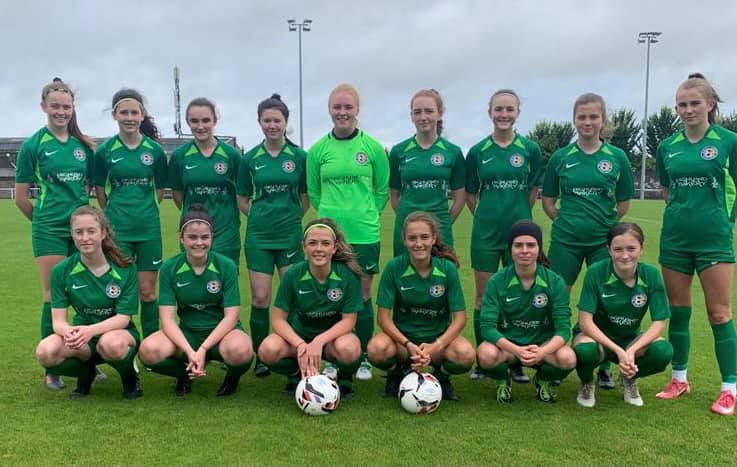 JODIE Loughrey netted a hat-trick as the Donegal Women’s League U17s continued their fine season in the Women’s National League.

Loughrey’s treble inspired the Donegal girls to a super away win at Bohemians.

In dreadful conditions, it took Donegal a while to settle into the game, getting adapted to playing against the strong wind.

On 22 minutes  Jodie Loughrey hit a sweet diagonal ball to Emma Doherty who checked inside and, from just inside the box, drilled a low drive towards goal with the ball hitting the post.

Donegal were two up going into the break with Doherty scoring twice.

Five minutes into the second half, Codie Walsh pounced on a loose ball from the Bohemians keeper towards the left back, and calmly lobbed the keeper from 25 yards.

After a sweet move on 52 minutes, Doherty drew in three defenders before squaring the ball into the advancing Loughrey, whose thunderous shot found the bottom corner.

The industrious Keri Loughrey, who covered every blade of grass throughout the game, battled to win the ball before passing to Megan McLoughlin who’s shot was peered by the Bohemians keeper, however Jodie Loughrey was on hand to fire home the loose ball.

Donegal played out the last 20 minutess with 10 players when a collision saw Eva Blaney having to be withdrawn.

Jodie McFadden swept up a shot from Leah Hughes, with her vision to pick out Jodie Loughrey, Donegal moved the ball from left to right with Nicole McDaid making it six on 82 minutes with a low strike into the bottom corner.

Jodie Loughrey got her hat trick to wrap with the scoring for Donegal.