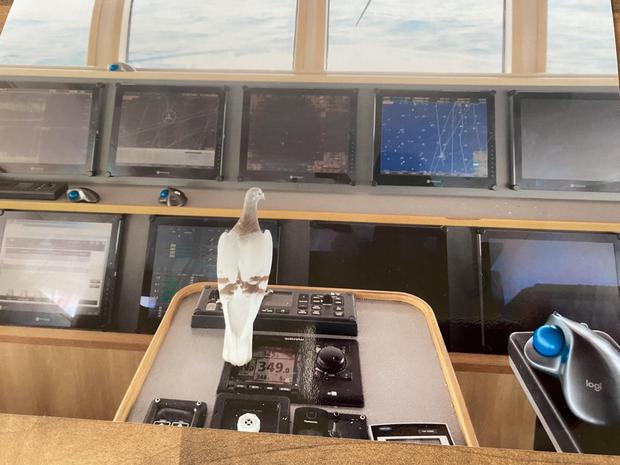 A Donegal fishing skipper has helped reunite a lost racing pigeon with its Irish owner after it landed on his boat 180 miles off the West coast of Ireland.

Skipper of the ‘Alannah Reilly’ boat Patrick Diver was as shocked as anyone when the pigeon landed on the boat.

Patrick and his crew were determined to find the owner of the bord and return it to its owner.

So he contacted a friend in Gaoth Dobhair who races pigeons.

“We are based out of Castletownbere and there were nine of us out on a 26-day fishing trip for prawns, about 180 miles from the coast.

“The pigeon landed on the boat and was quite cheeky in that she’d make her way inside the wheelhouse anytime she’d see the door open.

“We grew very attached to her and just wanted to make sure she got home. I’ve a friend Steve O’Dea in Gweedore who races pigeons so I got in touch with him to see if we could find the owner from the pigeon’s leg tags.

“If we could hold onto the pigeon and she didn’t fly off in those two weeks she was with us, we said we would do everything to get her home.

“So when we landed back in Cork, I drove home to Gaoth Dobhair with the pigeon where Steve checked the tags and got in contact with another pigeon racer Graham Reilly in Ardee who, in turn, contacted his owner Jack Reilly.

“We spoiled her for the trip to keep her with us and we are delighted that she got home,” he told LMFM.

“Lady Ann has raced seven times this year and has put in great performances. She has about 1334 miles under her belt at this stage and always landed home safely apart from this time – when she got a lift,” he laughed.

“She was let out in Saint-Malo in Brittany at 11am on June 27th on a day when there wasn’t great visibility across the English Channel.

“She missed Ireland, flew to South England and kept going but missed Wexford. She eventually spotted a trawler to land on and the skipper and crew, to whom I extend my huge gratitude, fed her rice and water and she grew so tame, she was eating from their hands.

“She had a little fly around the boat every day but always came back to them.

“The journey from France should’ve taken up to 10 hours so I knew something was wrong when she hadn’t returned by that evening. Quite a few pigeons didn’t make it back because of the weather.

“She was a good consistent pigeon with good experience so she should have made it back no problem.

“So she was transported back to Cork by trawler and then brought by van to Donegal and then by car to Ardee when Graham gave me a ring to say he had my pigeon.

“I was delighted to get her back and she will race again but I’ll ease her in slowly. As soon as she got back to the loft she went to her nest, as if she never left.

“Even with all the scientific knowledge we have today, no-one can explain how pigeons can find their way home. It’s a lovely mystery that I like about pigeons.”