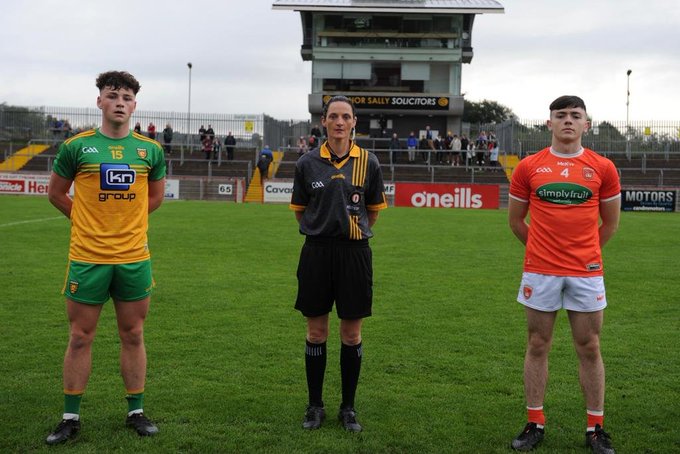 LUKE McGlynn says practice made perfect for the Donegal minors as they reached the Ulster final.

McGlynn netted a late goal to turn the tide in Donegal’s favour against Armagh in Friday’s semi-final.

The Glenfin man finished off a superb team move as he ratted home the game-changing goal.

“That’s what we work hard on every night in training, running hard off the shoulder,” McGlynn said.

“Once you see that happening on the pitch, it’s unbelievable. it’s what we’ve worked hard on all year. It’s nice to deliver it on the day.

“You just have to move the ball quickly in there. We’re just happy it fell into our hands and we kicked on.”

In a low-scoring game, Armagh were ahead, leading 0-4 to 0-2 at half-time, but the Orchard were rocked by Cianan Campbell’s sending off.

McGlynn said: “We knew at half-time that we were in a good position. We knew that we didn’t play much football. We knew we had more in us and we had to get out of the blocks. We knew if we delivered that we’d have our say in the game.”

McGlynn has played a captain’s role in this Championship, scoring the goal in the 1-9 to 0-10 win over Monaghan in the quarter-finals having clipped six points on the opening night against Antrim, when Donegal won 4-22 to 0-8.

Donegal had to dig deep against Armagh.

McGlynn said: “We knew it was going to be a real dogfight. We knew about the battles that Donegal and Armagh have had down the years.

“We knew it was going to the wire. We knew that if we could hold out, give it our all the whole way that we’d get a result in the end up.”

Tyrone, who had a facile win over Fermanagh in their semi-final, stand between Donegal and minor glory in Friday’s final at Brewster Park.

McGlynn said: “We’re so happy to get over the line.

“That’s where we set out to be and thankfully we’ve got there now.”