DONEGAL’S dreams of landing an eighth Ulster Minor title faded in the space of two second half minutes in Brewster Park.

Conor Owens and Cormac Devlin, the Tyrone captain, netted the decisive strikes as the lights went out on Donegal’s hopes.

Eleven minutes from the end, with Tyrone leading 0-9 to 0-6, Owens, drilled past Aaron Cullen after being fed by Eoin McElholm.

The Ardboe man, who ended with 1-3, managed to get free and his finish, after getting his hands on Shea O’Hare’s brilliant pass, put nine between them.

Donegal substitute Karl Joseph Molloy, with his first involvement, hammered to the Tyrone net in the 55th minute from 20 metres.

It was a scant consolation, though, for a game Donegal.

In the build-up, Donegal manager Luke Barrett urged his team not to be ‘restricted by the minds of our own traditions’ – a pointer to the fact that Donegal were appearing in the final for the 13th time with Tyrone lining up for a 34th Ulster MFC final. 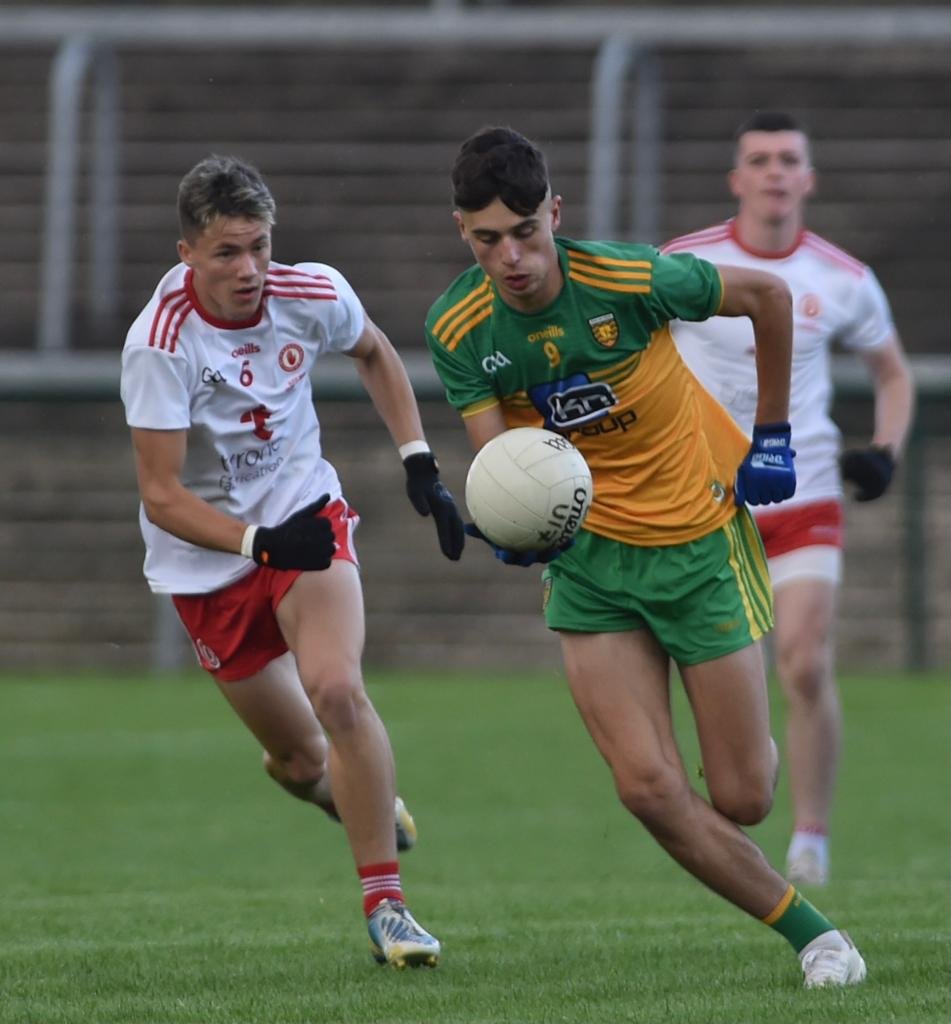 Donegal squeezed past Armagh a week ago thanks to Luke McGlynn’s late intervention. The captain’s golden goal sank the Orchard to book Donegal’s final sport.

A 4-22 to 0-8 win over Antrim in the preliminary round was followed by a claustrophobic quarter-final, McGlynn’s first half goal proving decision in a 1-9 to 0-10 win.

Their passage was rather less seamless than Tyrone, who racked up 9-37 across their facile wins over Down and Fermanagh.

Tyrone signalled their intent here with Cormac Devlin and Ronan Strain on target inside the opening 45 seconds. 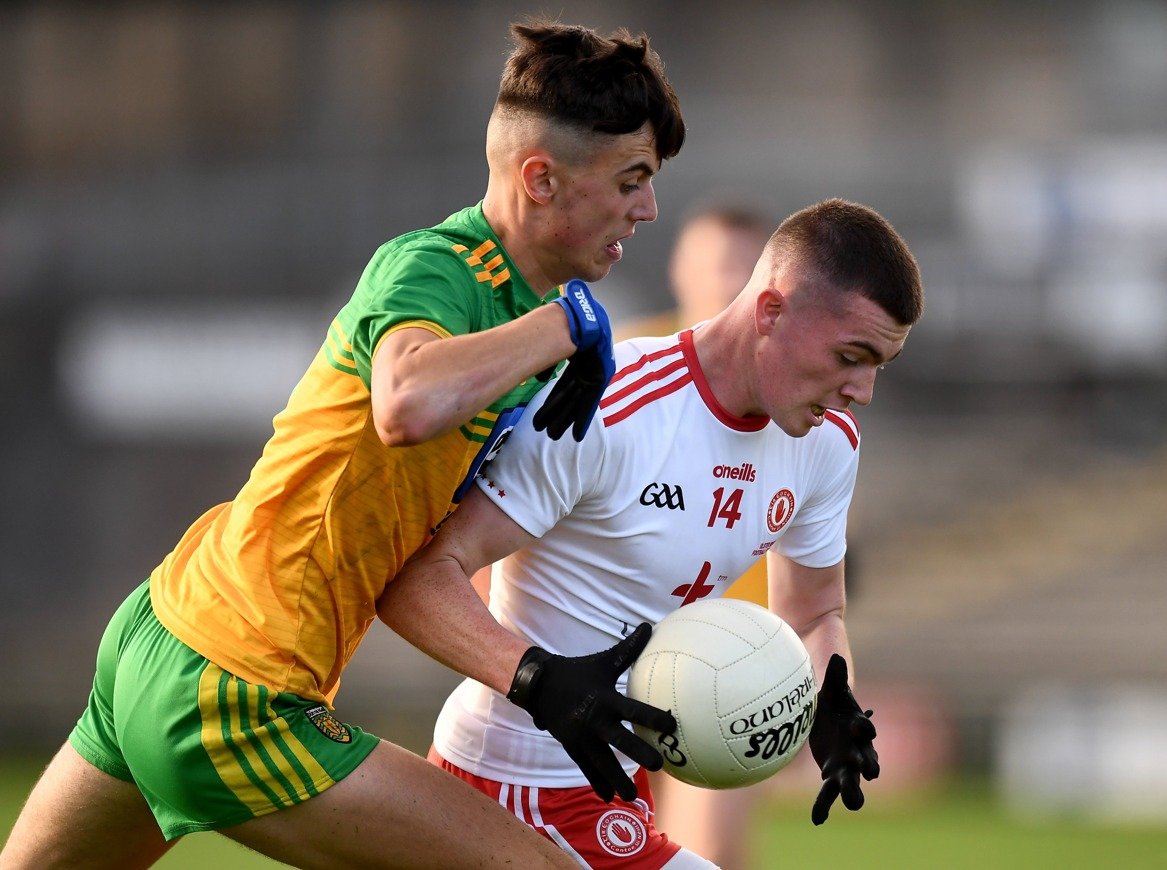 With Tyrone losing their shooting boots for a period, kicking six wides before the water break, Donegal got back level, via Kevin McCormack and Daniel Marley.

Gerard Donnelly’s side led 0-7 to 0-3 at half-time, in spite of ten wides, with Donegal struggling to make inroads in the final third.

Barrett rolled the dice at half-time, sending in Naomh Columba’s Michael Callaghan and Glenswilly man Gary Kelly, both of whom having caught the eye off the bench previously in this Championship. 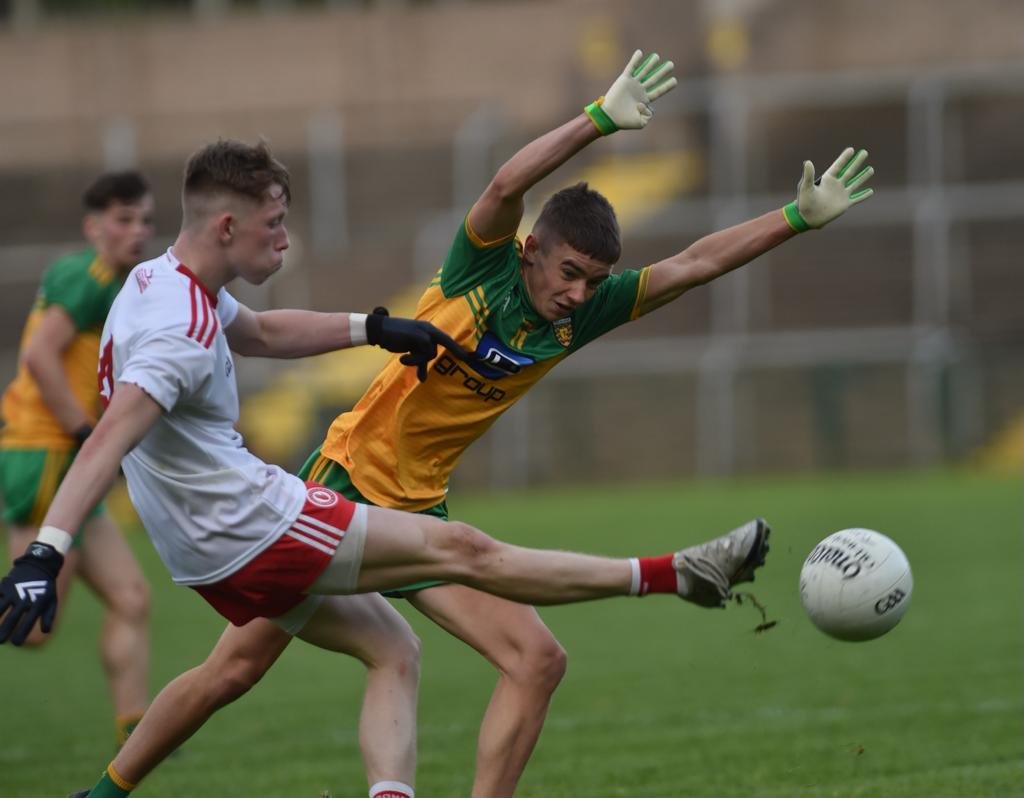 Donegal spurned a couple of early efforts in the second half that would’ve inched them back onto Tyrone’s coat tails. Callaghan kept his composure under pressure to narrow the margins before Tyrone lost midfielder Ruairi McHugh to the sin-bin for ten minutes.

Sean Ward had Donegal within striking distance soon after, but McElholm struck a timely point for Tyrone, who were 0-8 to 0-5 in front when they huddled for water midway through the second half.

Donegal stayed in touch for as long as they could, but they were undone by the goals as the Fr Murray Cup heads back to O’Neill country for the first time since 2012.