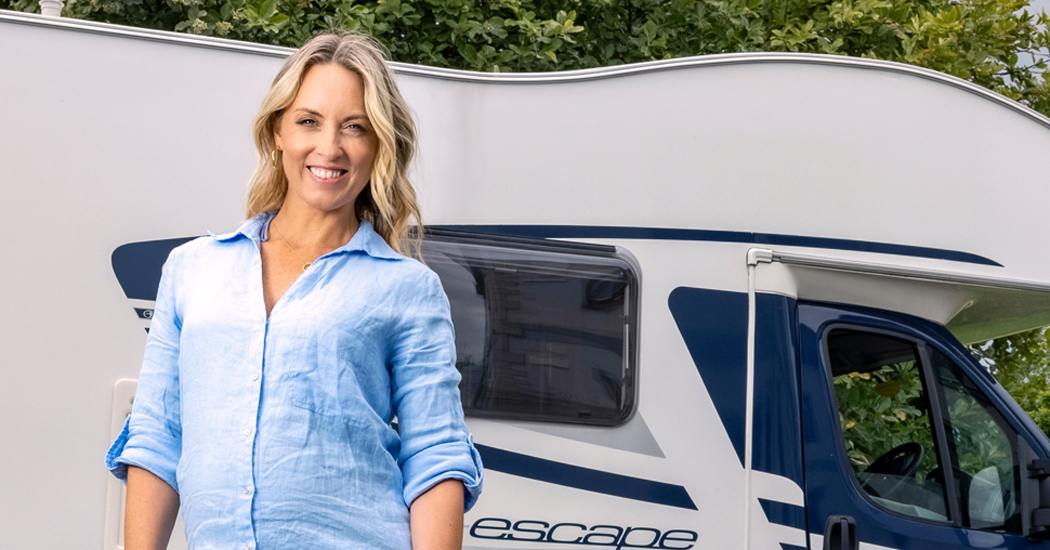 Kathryn’s Donegal adventures to air on RTE this weekend

The delights of Donegal are in the spotlight this weekend in a new series of the RTE travel show ‘No Place Like Home’.

The programme follows presenter Kathryn Thomas on a four-week campervan adventure along the western seaboard, highlighting the incredible range of things to see and do and encouraging people to take short breaks this autumn.

It’s destination Donegal is the first episode, which airs on Sunday August 22nd.

Kathryn starts her journey at the most northerly point on the island of Ireland, Malin Head.

She takes a walk along the insanely rugged clifftops and dramatic landscapes of Malin Head, featured in the latest Star Wars movie. Kathryn meets up Micheal Gallagher – The Donegal Postman who has delivered the goods around the Bluestack Mountains for 48 years. In that time he’s also developed a reputation for successfully predicting the Irish weather using traditional techniques handed down by the generations before him. Kathryn is meeting him especially to check his weather forecast for her trip down the west coast. He’s been saying that Summer 2021 is going to be a great one. During this chat he’ll also give a nod to the influence of fairies on Donegal’s culture and weather!

At Mullin’s shop Kathryn stops off to the get the local skinny and pick up some maps from Mrs Mullins, who’s worked behind the counter for almost 70 years.

Following a drive down the coast Kathryn is soon pulling into the newly opened Wild Ireland Sanctuary to meet the Bearman of Buncrana Killian McLaughlin. How did a former solicitor convince the locals to let him bring bears and wolves to the wilds of Inishowen and how realistic is it that he can return these wild animals to their ancestral homes? 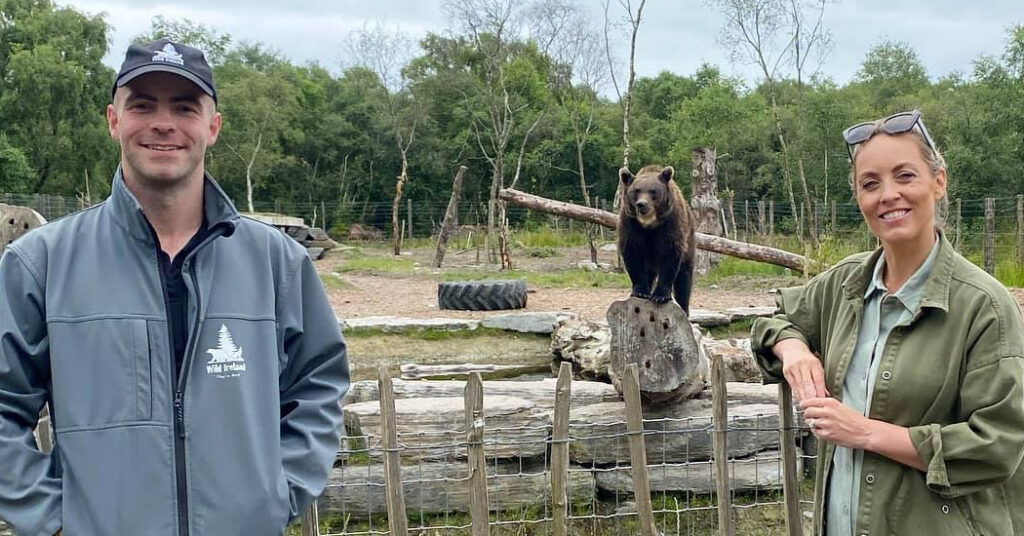 Killian McLaughlin and Kathryn Thomas filming No Place Like Home

The beaches of Donegal are the hidden gems of the county and Kathryn samples one or two of her favourite sandy spots in Co Donegal, with an eye on swimming safely and local lifeguard services.

Heading down South and inland from the rugged coast, Kathryn’s sights are set on Lough Mardal Lodge, which features eco-friendly accommodation on the shore of Lough Mardal. It’s run by Marcus and Claire Tindal who gave up a life as rock ‘n’ roll and events managers to set up a more stable lifestyle in Donegal with their twins, now aged 6. They have 12 yurts on site and Kathryn will settle down here for the night.

Kathryn takes her daughter Ellie on a walk across the Fairy Bridges in Bundoran. This is a series of ancient sea stacks stretched along the town’s coastal area. The 360 ̊ view provides a panorama of Slieve League and beyond across the bay where Kathryn’s Donegal journey started and points the way forward for the next leg of her western odyssey.

The programme aims to build on the success of Fáilte Ireland’s ‘Keep Discovering’ domestic marketing campaign.

Niall Tracey, Director of Marketing at Fáilte Ireland said:  “The ‘No Place Like Home’ series proved extremely popular last year and it is fantastic to be collaborating with RTÉ once again to encourage people to take breaks at home this autumn. The domestic market will be key over the coming months and Fáilte Ireland is continuing to drive domestic demand for the shoulder season. ‘No Place Like Home’ will showcase destinations and tourism businesses across Ireland and remind more Irish people to discover the joy of holidaying at home.”

Gerry McGuinness, RTÉ Commercial Partnerships Manager commented: “It’s great to see the return of ‘No Place Like Home’ after the success of the first series. This year Kathryn Thomas will once again show RTÉ One viewers the endless opportunities to holiday at home and in particular the magical journey from Malin to Mizen Head. With the support of Discover Ireland, RTÉ will entertain viewers and entice them to visit the dramatic landscapes and beautiful beaches Ireland has to offer.”