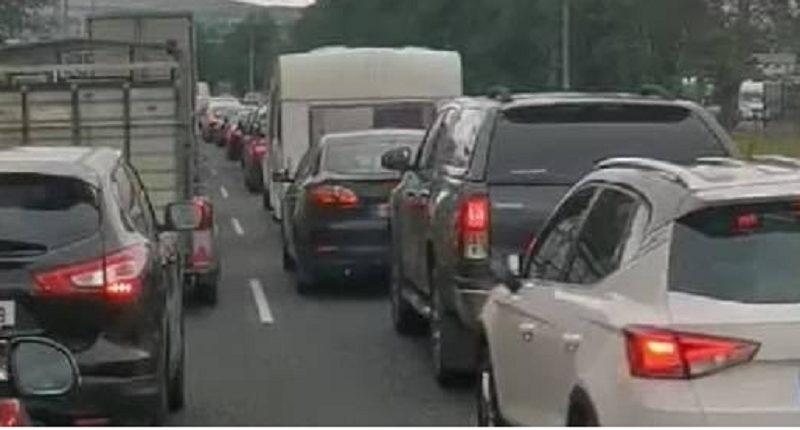 Letterkenny businesses ‘down massively’ due to roadworks

Local businesses are being seriously affected by traffic jams arising from roadworks in Letterkenny this week, owners claim.

Lengthy delays were seen across almost all areas of the town centre yesterday. Traffic was almost at a standstill on the N56 Four Lane between the Dry Arch and Polestar Roundabouts.

The disruption couldn’t have come at a worse time, say the owners of clothing store Evolve Clothing.

Mark and JP McCloskey said their store at Letterkenny Retail Park was down thousands of euro on Monday, and many other nearby businesses’ sales were also down as customers were unable to make it through the town.

The Four Lane roadworks are expected to be carried out at night, but traffic was narrowed down to a single lane on the Ballyraine approach the Polestar on Monday.

The McCloskey brothers, in a statement on Facebook, said the roadworks are “killing businesses”.

“Its extremely frustrating to see this,” they said.

“The safety upgrade on the Four Way was agreed to be nighttime work after consultation between the Chamber and the Council.

“Whoever is making these decisions do not understand how difficult it has been for businesses everywhere. And it would appear they have no interest in the town getting back up on its feet.

“Our business is down thousands of euro today and after having spoken to numerous other business they are also down massively at this busy August period.

“This cannot happen again tomorrow or any other day, our town is getting a very negative reputation and anymore of this will drive more people away.”

Letterkenny businesses ‘down massively’ due to roadworks was last modified: August 17th, 2021 by Rachel McLaughlin
Facebook0Tweet0LinkedIn0Print0