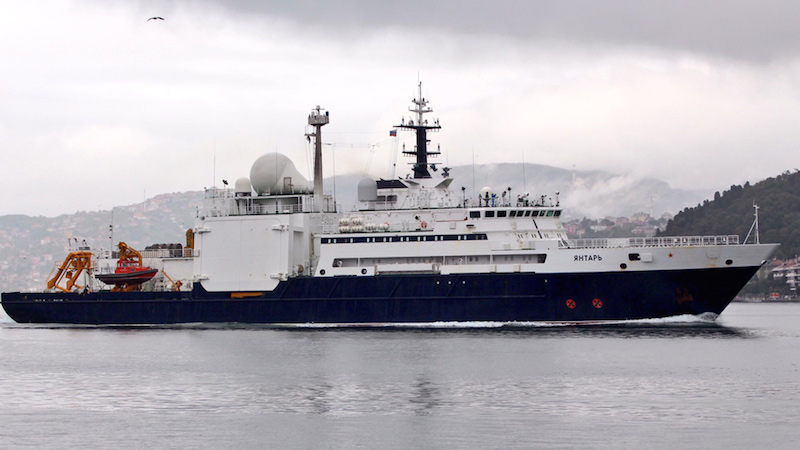 A Russian vessel, believed to take part in surveillance operations, has been anchored off the Donegal coast in recent days.

The Irish Naval Service is aware of the ship’s presence as it moves up and down the West coast.

The Yantar is operated by Russia’s secretive Main Directorate of Underwater Research, which operates many of Russia’s special mission submarines.

It has a crew of 60, is 350 feet long and was spotted on Tuesday and yesterday.

The ship is officially an oceanographic research vessel, but carries extensive surveillance equipment and is capable of attaching spy equipment to undersea cables that carry internet traffic across the world.

Its missions are thought to include cable cutting, laying of taps on undersea cables, and intelligence missions.

Dozens of fibre-optic cables span the globe and Nato also has dedicated military cables on the ocean floor. On board the Yantar there are devices designed for deep-sea tracking, as well as equipment for connecting to top-secret communication cables.

“This ship is transmitting on the automatic identification system and is outside Irish territorial waters.

“This activity is in line with the UN Convention on the Law Of the Sea (UNCLOS) rules for transit through international waters.

“Territorial waters are 12 nautical miles from the coast of Ireland and under UNCLOS, there is no restriction on ships operating on the high seas inside exclusive economic zones.”