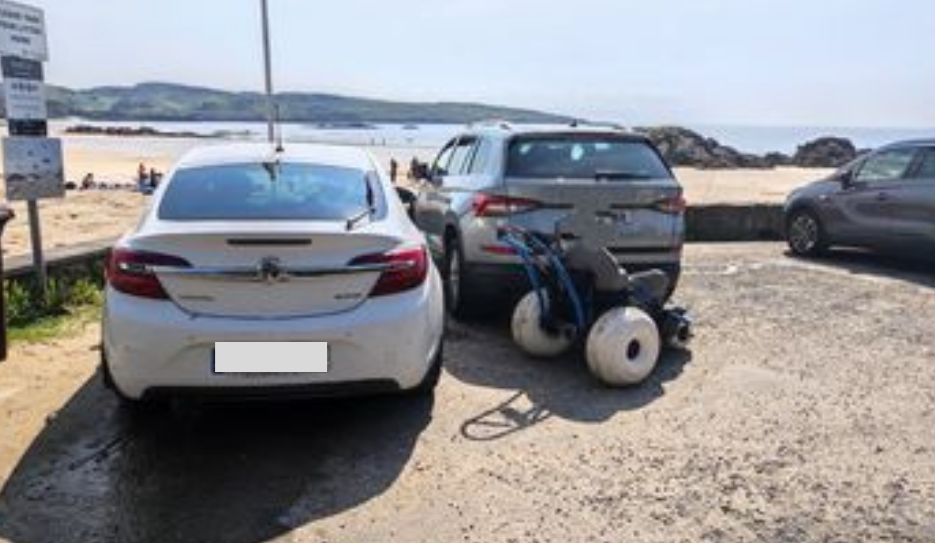 A WOMAN whose son is a wheelchair user has expressed her anger at illegal parking at a scenic Donegal beach.

The woman was forced to seek the assistance of a lifeguard at Fintra Beach in Killybegs today.

The mother was with her two sons for the morning and when she returned to her jeep, which was parked in one of the disabled bays at the popular amenity, she found entry to the vehicle blocked by a car.

The car in question was also blocking the emergency access route to the beach.

“My child has sensory issues and a seizure disorder, one of his triggers is new people or new places though this is very well controlled with anti convulsion medications,” the woman explained to Donegal Daily.

“I had to leave him sitting in the beach buggy to pull out of the parking space, just to open his door and get him into his car seat

“I should have to risk him taking a seizure just because I couldn’t open his car door side. I am really sick of it.

“I should not have to leave my child with a stranger (the lifeguard) because some jackass parked their car illegally.”

The woman had spent an enjoyable morning at Fintra with her two sons and used the new beach buggy wheelchair for her eldest boy, who is five.

Earlier this summer. Fintra became the seventh Donegal beach to welcome a wheelchair, following on from Rathmullan, Downings, Carrickfinn, Marblehill, Rossnowlagh and Narin/Portnoo.