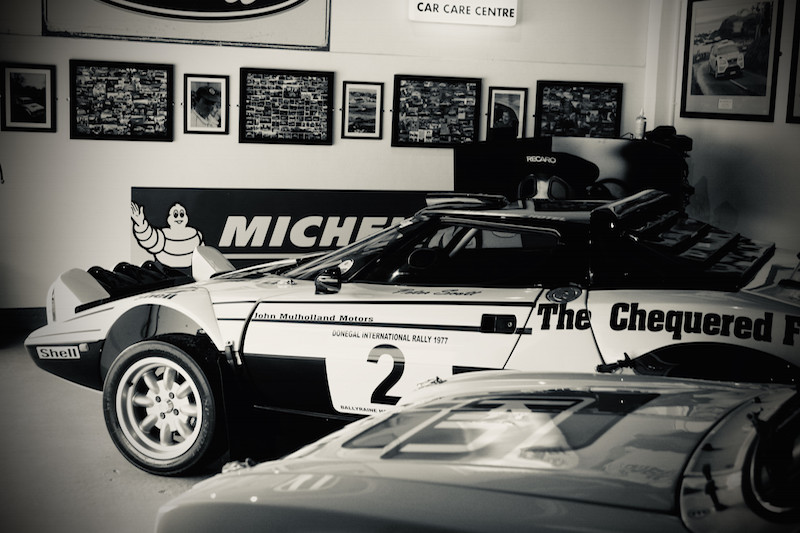 A big wave out the window of Jim Mc Glynn’s minibus the Monday after, the former clerk of the course and double winner of the Donegal international Rally, James Cullen was still beaming. He so reflected how we all felt.

It was like we all were at the Donegal International Rally at the weekend and yet not one of the beautiful iconic Rally cars turned a wheel or ignited a chamber of petrol!

James teamed up with Tony Kelly as guests at a display of very special machinery The story of James Cullen’s career is just one that was remembered in a private collection of iconic Rally machinery tucked in at the back of the Blue Stacks in Donegal. 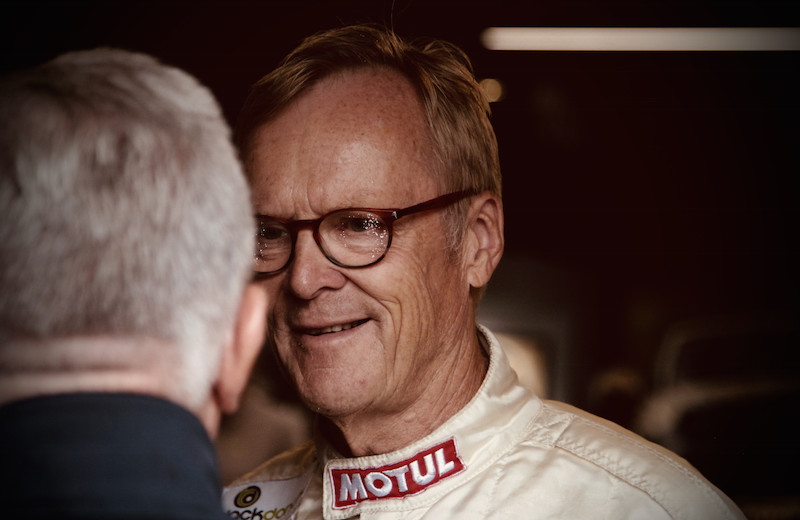 The great Ari Veteran enjoying the crag at the open day at The Stables Motorsport Museum. Photo Brian McDaid.

In James Cullen’s case it was the Opel Ascona 400 from the late 80’s that Donagh Kelly has recreated in great detail.

Denis Orr, a big Cullen man was over on Saturday, got his picture standing beside the Ascona and the memories of their great days just flow, people like the late Frank Grimes and Ellen Morgan were recalled and some of the great battles that James Cullen fought in the stages over the rally weekend.

Cullen’s story is just one chapter of Motorsport that a fellow Donegal man has recreated in his Motorsport museum near Frosses.

Cullen’s Ascona sits in the main building with up to twenty more cars from different eras of rallying history. Even one of Porsche that Donegal man Damien Faulkner from Moville had so much success with on the track in his Motorsport career is pride of place in the museum. 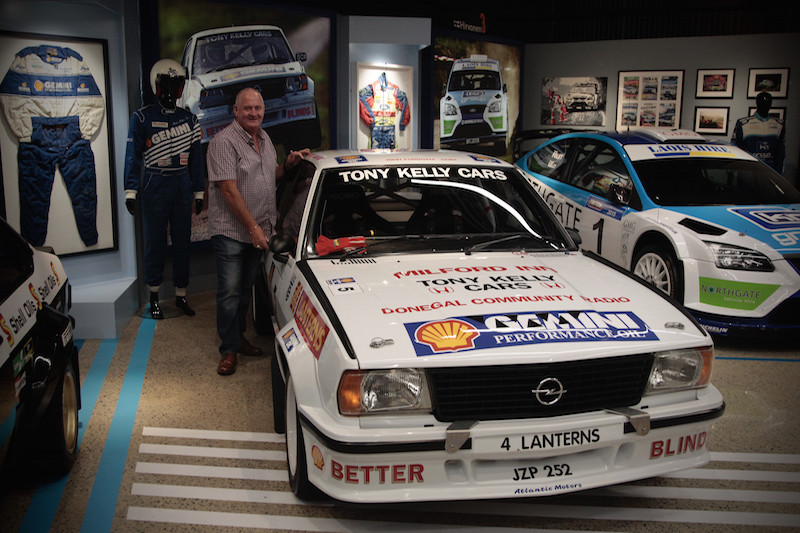 Denis Orr pictured beside The Opel Manta in the graphics of James Cullen and the late Ellen Morgan. Photo Brian McDaid.

Damien was there in Saturday now retired from the track he looked on with pride at the Porsche that he sourced himself Ian’s over a few years restored everything on what can only described as a beautiful finish piece of track racing history.

Damien built the car to keep for himself a memory of his days at the height of his career. Donagh Kelly became interested in the car but Damien was still set on keeping the car, but chatting to us this week the cars are better here I’m this collection. Beside Damien’s Porsche is a beautiful rallying M3 BMW in Patrick Snijers colours which would remind many of the battles between the late Bertie Fisher and Austin Mc Hale and later with the late James McDaid and Hugh Martin Doherty, who all drove a M3 in their day.

There’s so much included in this main building and then there’s the big screens and an amazing sound system and lighting which focus on individual cars capturing the sound of them perfectly. 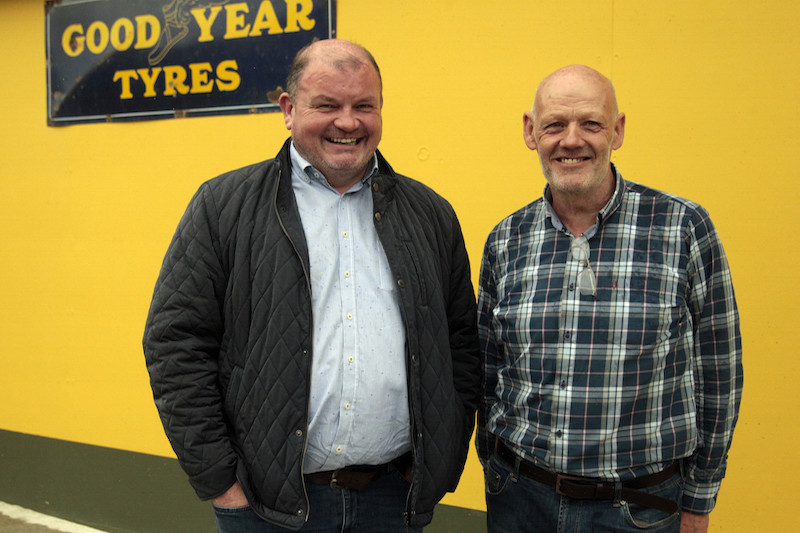 You could spend hours here which I did on Saturday hoping that the clock would stop for a few hours so I could get time to look at everything in detail, and across the yard it even gets better seeing the nose of a Lancia Stratos in the Chequered Flag colours of the 1977 winner of the Donegal Billy Coleman. It even has an old sponsor sticker on the boot lid Letterkenny Motors (owned by the late JJ Reid ) who were the main Fiat dealers in Letterkenny at that time

And in a room next to this called the Donegal room is the most emotional room for me in the museum which along with its wall to wall photos of a few thousand rally cars and faces from rallying over the years have two very special cars parked up side by side.

The late Bertie Fisher and the late Manus Kelly’ two Subarus in this room just as they would have been the weekend the would have started the Donegal International rally, had a we chat with Bertie’s Brother Ivan on Saturday talking about the good old early days when he came up to Donegal to service for his brother Bertie. 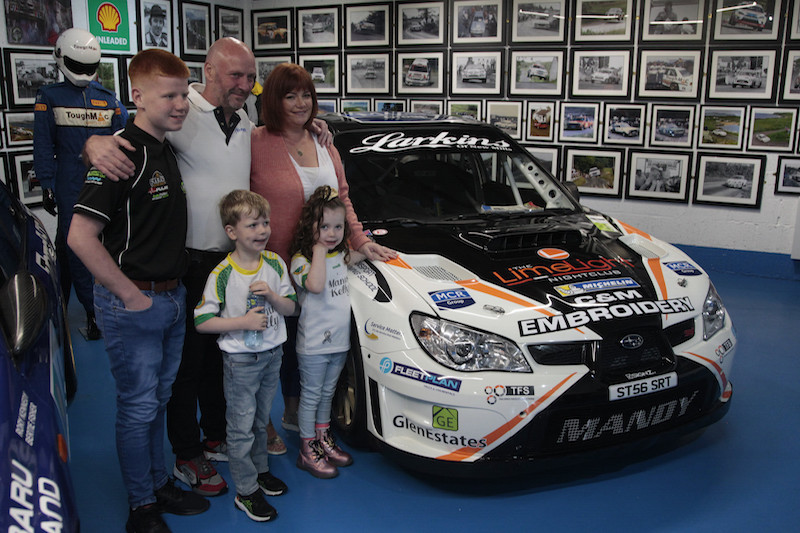 Bernie Kelly and her children are welcomed to the Stables Motorsport Museum by Donagh Kelly where the Late Manus Kelly’s Subaru takes pride of place in the Donegal Room. Photo Brian McDaid.

And we also met members of Manus Kelly’s family who were over to also see Manus’ old three in a row winning Subaru for the first time. Over the weekend I thought how good it felt to have Manus’ Subaru back in Donegal and to have such a beautiful place like this motorsport museum for its home which Donagh Kelly calls ‘The Stables’

For the short time that went so fast I got the chance to catch up with friends from years ago like Dan kelly who worked in the Toyota Garage in Letterkenny, quietly proud of his cousin and the Donegal motorsport museum. I also chatted to the great Mervin Johnston and listened as he chatted to me about his early days when his mini coopers S in its hat days doing battle with and up and coming Billy Coleman in his old Mk 1 Ford escort TIU 250. 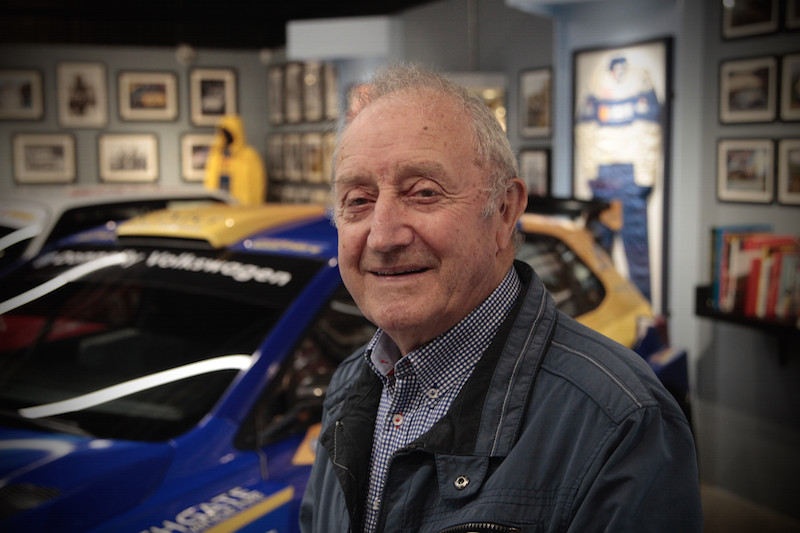 Mervyn Johnston from Pettigo who was as the open day at The Stables Motorsport Museum.

They were many who came to enjoy the display that Donagh exhibited at the weekend and they were many former winners but the big attraction was that of the return of one of the all time favourites the Flying Fin, Ari Vatenan , winner of the Donegal in 1978 on his way to becoming a world rally champion, Ari arrived like a rock star in his cream BMW racing gear. Civilised folk turned into hunters as they tried to track down this finish driver’s attention, (me included.) Roger Whiteside had a photo he had taken himself as a young teenager of Vatenan. In Knockalla , that was the year they ran the rally down the hillclimb. Ivan Furey had an old black and white programme from the same year Vatenan took time to listen to both their stories. 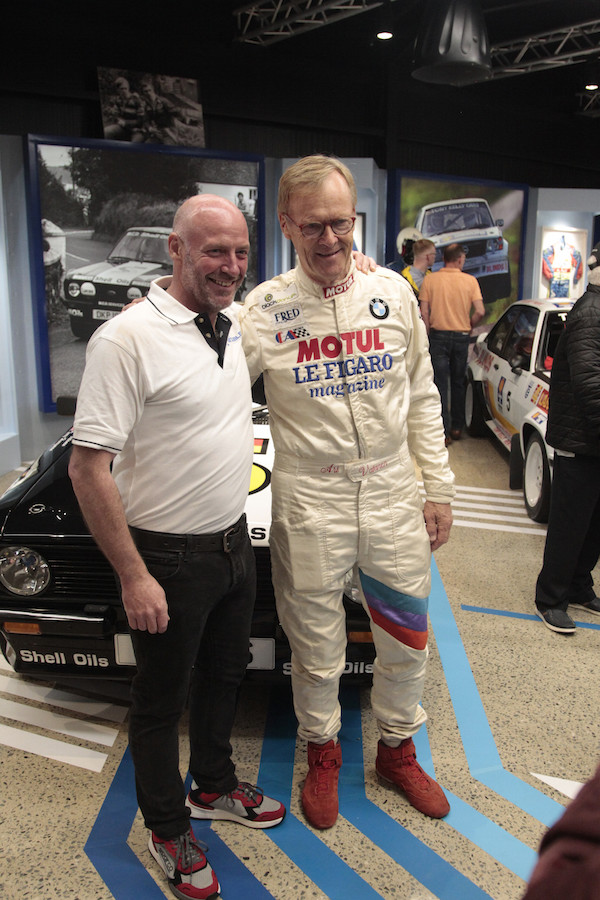 Donagh Kelly with his special guest former World Champion Ari Vatenan who was in Donegal at the weekend as guest to Donagh Kelly at The Stables Motorsport Museum. Photo Brian McDaid.

And like the rest I had two original receipts that Andrew Hegarty only recently found from his late father’s days when Andrew was the local Ford dealer that sponsored the Finish visitor to Donegal in 1978. I don’t know who got the most enjoyment from me or Vatenan looking through that neatly typed more than likely by Martha Lynch detailing that they had paid a deposit of £15 for Ari Vatenan and team manager David Sutton who they booked into the Shandon Hotel for the weekend of the rally. And having paid £500 sponsorship Andy needed to get paid for the hire of a Ford Cortina £78 and a Ford Escort £68 for the weekend of the rally, in a second receipt Ford of Cork have agreed to pay Hegarty’s for the two hires for the rally weekend. 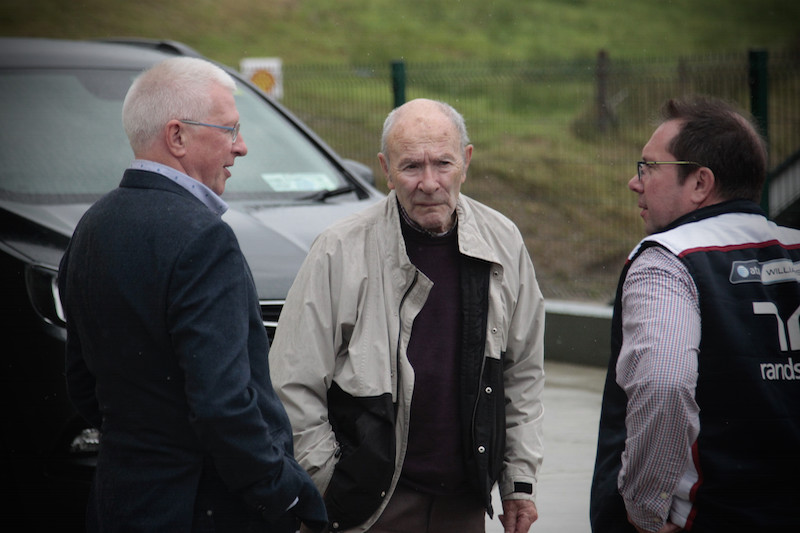 James Cullen chatting with Terry Harryman and his son Alan at the openly at The Stables Motorsport Museum. Photo Brian McDaid.

Ari Vatenan who had seen these receipts on a Facebook post took time to have a chuckle to himself as he read through them and even asked me if it was ok for him to take a few photos of these as he grabbed his phone out of his rally suit pocket. 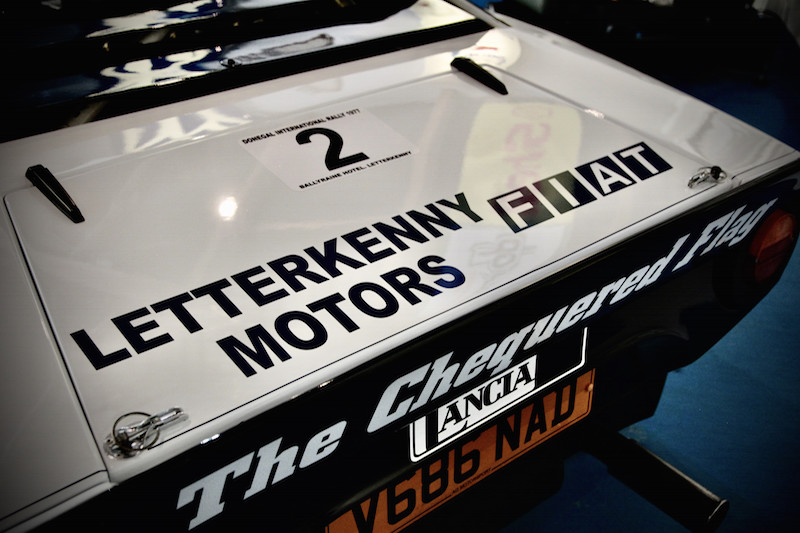 All this week I am still buzzing and feel as if I was at a rally at the weekend meeting up with old friends and catching up with some new ones. Then hearing famous voices like that of Terry Harryman who was there with his son Alan at the weekend. Terry was they navigator that was sitting on with Vatenan in the Rothmans Opel Manta when Vatenan clipped the banking going completely sideways into a narrowing cattle grid and the notes when silently until the Fin got the car straightened up before it squeezed past the gate posts when the normally relaxed northern voice of Harryman released a sigh of relief and then said those famous words ‘GOOD GOD’

Good God are beautiful words to describe how I felt as I moved through this private collection of motoring history this weekend. Even Dougie Hughes’ old Fiat Doblo van sits high in the middle of the yard and you can just imagine him in Glen Village in between runs getting the crowds going many years ago. 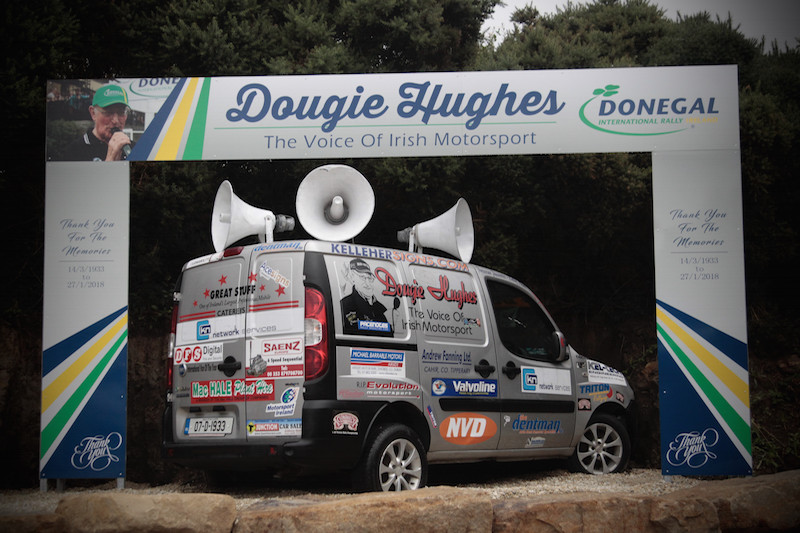 Duugie Hughes famous van has pride of place at The Stables Motorsport Museum.